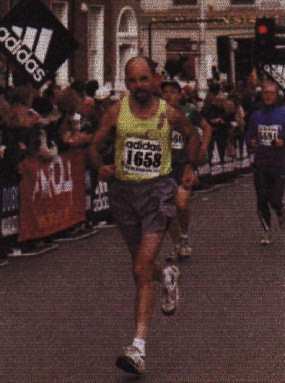 I proudly ran as a member of Team Delaware of the Arthritis Foundation’s Joints in Motion program. I ran in honor of my father, who has undergone two successful shoulder operations to remove arthritis and raised $4000 for the cause.

Running Commentary of the Race
Monday 10/28/02: Marathon Day
Good sleep, but I’m awake at 4:30am before rising at 6. A light “power breakfast” downstairs was followed by stretching and suiting up. At 7:30, Team Delaware departed the lobby for the one mile walk to the start line near Merrion Square. It was cool (40’s?) but no rain and no wind. Thank you God! I deposited my numbered bag in the staging area, made a potty stop and headed to the start area on the street next to Trinity College. The atmosphere was tense, but festive. Ten minutes before the 9am start, runners started peeling off outer shirts and throwing them to the sides of the street. 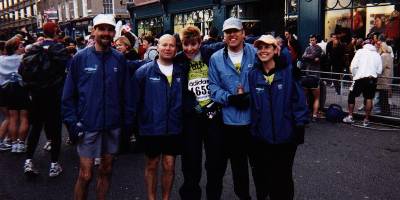 Team Delaware is ready to rock!

The race starts and half a mile down the street, I hand off my hat to Duncan, who will meet me at mile 18. I ran most of the first 7 miles with Mark from Belfast and a guy from NYC who were also aiming for a 4 hour finish time. Our pace was a little faster than I had planned, but I hoped the cold weather would keep me strong. I was comfortable in my Joints in Motion jacket. We received great encouragement from onlookers all along the course. Applause and shouts of “You’re doing great!” and “Well done!” filled the air. Kids wanted high fives, and I obliged. At one point, the crowd was so close on both sides that runners had to run single file. Water stops were every 3 miles. My gloves were on and off, since the bottled water was spilling on my fingers. Around mile 9 it was time to chow down on a granola bar. I was feeling pretty good, drinking plenty, with no leg problems. The course wound through residential areas, with smiling spectators standing in their yards or in large groups at street corners. I was encouraged that my 13.1 mile split time of 1:48 was virtually the same as I had done in the Philly Half Marathon in September. 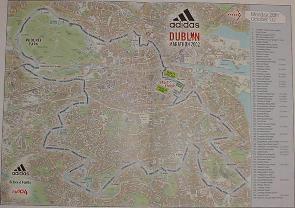 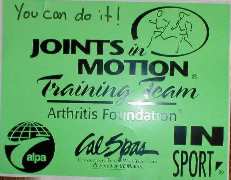 Strong Pace
My form was good and the spectators definitely helped push us along. My only stop so far was to walk while drinking Lucozade from a cup. Duncan greeted me before mile 18 and I gave him my jacket. It was time to get serious! My roommate Chris handed off a Power Bar and Gel. The vanilla gel was the first to be consumed, while I held a water bottle in my other hand. We entered Phoenix Park around mile 20 and immediately faced a long, steady uphill climb. It was like a death march. I started walking around one third of the way up to eat the chewy Power Bar and I kept walking (and chewing) a little longer than I would have liked. But I was a little nervous, since we were approaching mile 21, the longest distance I had run in training. Everything beyond that point was going to be a new experience. After passing a few trees I liked, I finally chose one to relieve my bladder. Oooh, that felt good!

The Wall
I think instead of “hitting the wall”, we hit “the park”. It just kept going and going and going. Yes, there were spectators at various points, but the path kept winding through the same scenery. I laughed about carrying my Power Bar wrapper and water bottle the whole way through the park since there wasn’t a single waste basket along the way. Then I thought about taking another walk break, but told myself to keep on trucking. From this point on, onlookers tried to cheer us by saying “It’s all downhill from here!”, so every slight upgrade from that point seemed like a cruel joke.

Road to Glory
Leaving the park gave me an immediate lift. At around mile 23, a radio DJ was pumping out some good music, and there was a sizeable crowd. That’s the point that I became emotional and had to fight back some tears because barring a major problem, my four hour goal was within reach. My nerves were tested since I could now feel soreness in my feet and a tingle in my legs every few strides or so. I prayed for God’s mercy to finish the race and felt sad for guys I passed who were stopped or limping in the final miles due to injury. They were so close to the finish! As I ran past the Gresham, there was just one mile to go.

800 M
The crowds lining both sides of the street grew larger as we approached Trinity College. There were barricades up once I saw a sign for “800 Meters” to the finish. But like some of my teammates agreed later, my mind wasn’t working well enough to figure out exactly how far 800 meters really was. One lap? Two laps? A man on a bike came alongside to encourage me. I could feel the energy from the crowd. Once I reached the final turn, there were just 100 yards to go and I started any vestige of a sprint that I still had in me. I couldn’t smile. I couldn’t acknowledge the crowd. I could only run.

Victory
The clock showed 3 hours 50 minutes! As I crossed the line with my arms in the air, a voice announced “Ray Christensen from Wilmington, Delaware…I think it’s Wilmington.” I said to myself, “Yes, that’s right, Wilmington” and walked into the chute where my time chip was removed. A few feet further, someone draped a foil blanket over my shoulders and finally I was handed a bag containing my “finisher” T-shirt and plaque. I was filled with pride, but felt alone among thousands of people. A personal victory.

Leaving the “chute” area, I picked up the bag I had left earlier (containing my old camera and a sweatshirt), enjoyed a cold cup of orange Lucozade, passed up the line for massages and wandered to the side of the crowded street to stretch and ask a man to take a picture of me. While looking for teammates or Duncan, I finally remembered that I had to check in with Joints in Motion when I saw signs directing me to another area. Still wrapped in my foil blanket, I checked in and grabbed a banana. Too bad what I really craved was a bagel!

Another 15 minutes went by as I decided against getting on a bus back to the hotel in favor of waiting for teammates. I was happy to see Scott and he was happy to see the bananas! A little later, Jane appeared. Jane was very happy to see the potato chips! Ninety minutes after I crossed the line, I boarded a bus back to the hotel. I couldn’t have walked it, but my legs weren’t in bad shape. A shower felt good and eventually I hit the lobby and received the happy update that all of us had finished! Now I felt pride for the team. 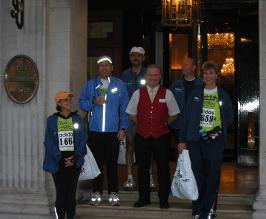 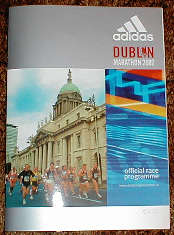 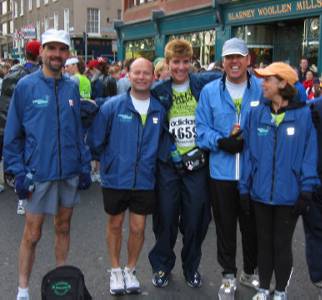 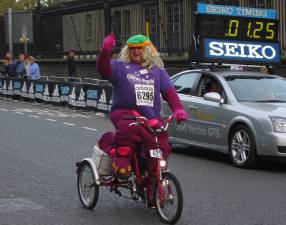 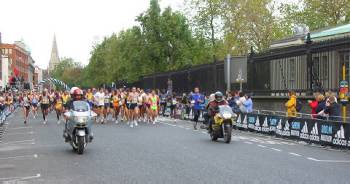 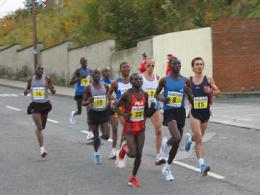 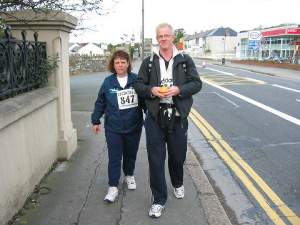 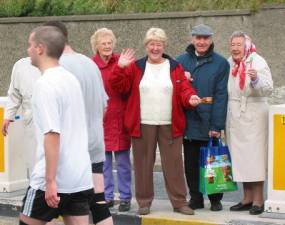 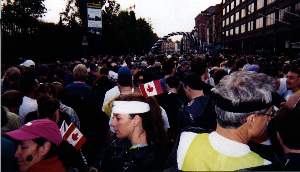 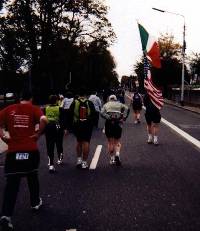 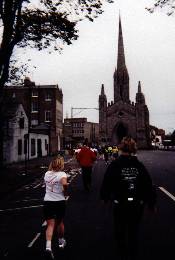 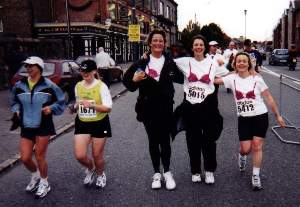 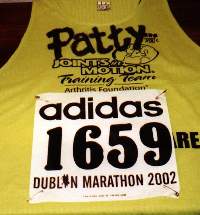 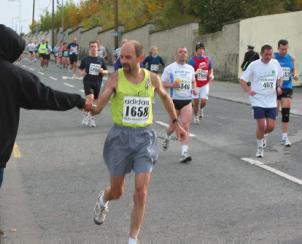 Ray getting re-supplied by Chris at Mile 18 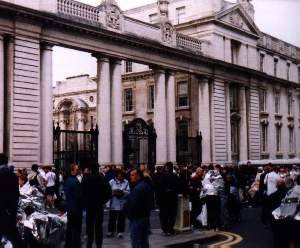 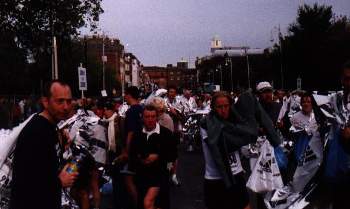 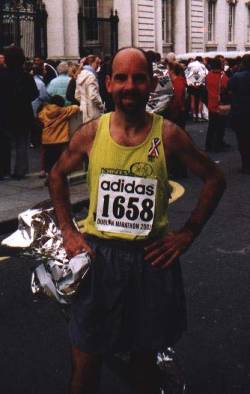 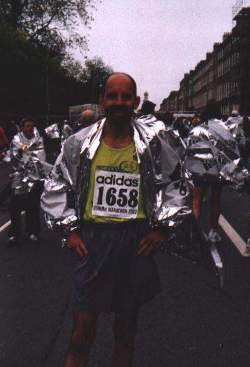 Ray, in all his glory, at the finish area 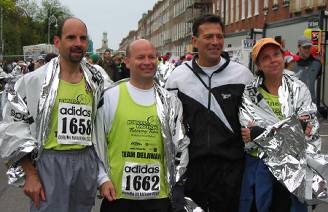 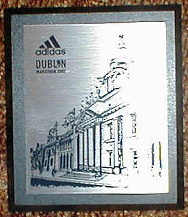 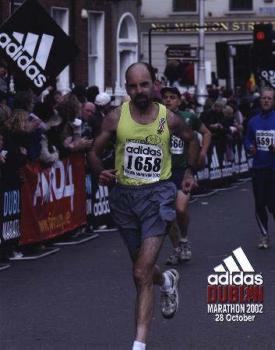