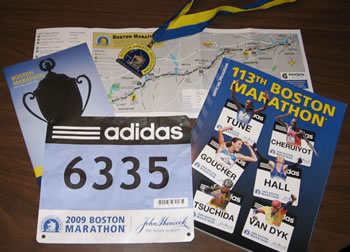 Conditions were great! Cool, cloudy, and just a little of the typical headwind. Marathon Man raced to his best Boston time and was happy with the effort.

All 7 Rebel Runners beat the 3-time defending champ Kenyan who DNF’ed with an injury!.

Monday, April 20
This was a “comeback” race after two tough 26.2 mile runs. At Breakers Marathon (October), I had gone out too fast for several miles and was spanked by difficult hills in the later miles. Disney (January) was my slowest marathon ever, due to several factors… I had a sore achilles, a slight headcold, walked around Disneyworld for two days prior, and above all, raced a half-marathon the day before as part of the “Goofy Challenge”. So even though Boston is a more challenging course, I was virtually guaranteed a better time.

My strategy of going out at under a 3:20 pace for the first half worked well, although the legs got pretty tight towards the end.

The spectators were even louder than I had remembered.

High-fiving kids whereever possible was enjoyable (even a bit in the final miles).

Wellesley girls came through as usual. I didn’t get too close or too far to the left.

I hit water stops on both sides of the course, mostly grabbing Gatorade. It constantly tried to splash into my left eye.

I looked for Johnny Kelley statue all the way up Heartbreak Hill, but still could not locate it. At least it occupied my mind for
a while!

Descending into Boston, I realized that I had a chance at beating my previous Boston best.

During the entire 2nd half of the race, I was steadily being passed by other runners. Of course it was easiest to notice when a young lady would go by. Frustrating to have no answer for it!

I knew when I was around Lee Kaufman, when I’d start hearing chants of “Go Delaware!” because of his DE Running Co. shirt.

The looming Citgo sign never looked so good! One mile to go. 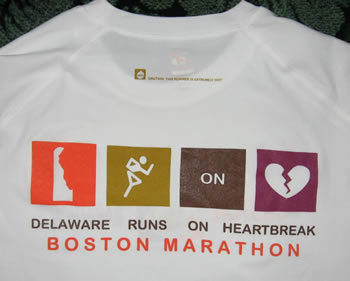 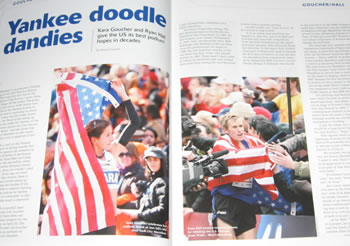 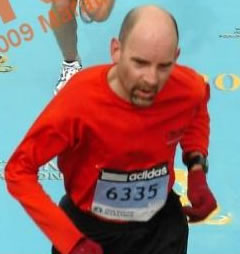 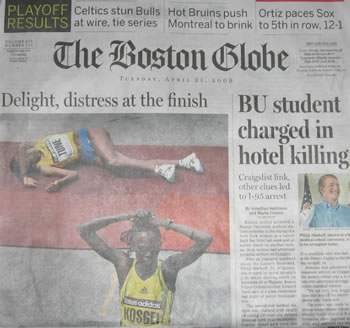 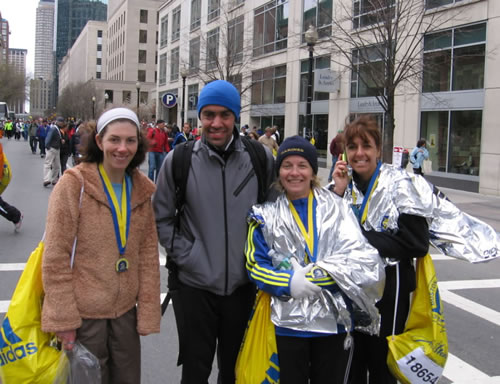 The finish area was brutally cold due to the wind. Got wrapped in a foil blanket, had chip removed, received medal, ate bagel and staggered through the family reunion area to the Gregg bus where a cold Budweiser was waiting for me. 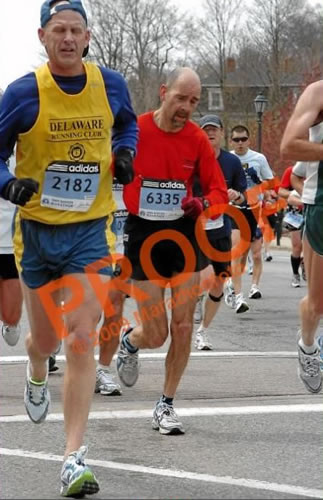 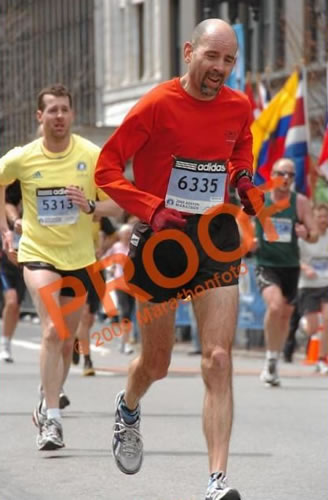 Josh and I eventually met Lori, Andrea and Claire at the frigid family reunion area “C” (for cold?) and we hobbled toward the crowded subway enroute to a beer at a warm downtown bar. Then on to their hotel to shower. Downtown a couple “T” stops again to eat at Scollay Square” near Boston Common, while watching the Bruins and Celtics playoff games on TV.

Josh and I took the “T” again to the railroad station where we just missed a train at 1020 and had to sit in the quiet station until 1125. We boarded the crazy train (with happy fans headed home from Celtics and Red Sox games) and got off at a desserted West Natick station in the rain just after midnight. John’s Car Service deposited us back at the hotel.