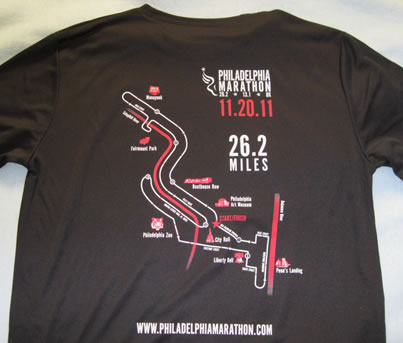 After 18 marathons out of town, this would be the second in a row that I slept in my own bed the night before. I had been a spectator several times, and finally got to run the interesting, but fast course with several Pike Creek Valley Running Club friends. We carpooled up from Wilmington and would return to enjoy a post-race brunch for 20.

The Philadelphia Marathon was run on a fast & scenic course on Sunday, November 20 in warm, sunny conditions…

Through Center City & Up The Schuylkill River 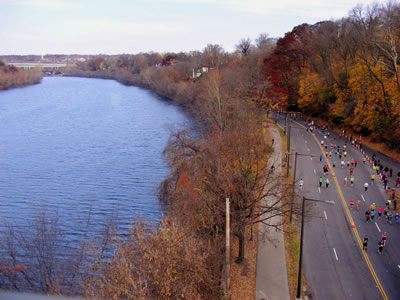 Another Fast Course
Since my marathon personal record in 2008, this would be the 3rd “PR Course” to give me a shot at a fast time, but I didn’t get quite enough miles in, and was hampered with achilles tendonitis at a critical time during training. But I looked forward to race day and would wear my neon green New Balance racing shoes again.

50th Birthday
Philly would be the very first time I was out of my 40’s, in a new age group. I turned 50 5 days earlier, so at the traditional Rebel Runner sendoff pasta dinner at Cafe Napoli, my friends gave me a bunch of “old guy” gag gifts and a cake to celebrate. “Getting older” provided extra motivation to prove that I was really still young, by smoking the course!

Early Carpool
9 of us met at 5am in a Wilminton parking lot to head for Philly in 3 cars. No traffic until arriving in the start area where parking lots quickly filled. With approximately 10,000 runners in each race, our little group was split between the Full and the Half, which shared the same course until mile 13. This race always seems to have great weather and today would be no different. The sun stayed out to keep the boisterous spectators warm. We started at 7am, with Mayor Nutter at his post to high five those who needed the extra inspiration. 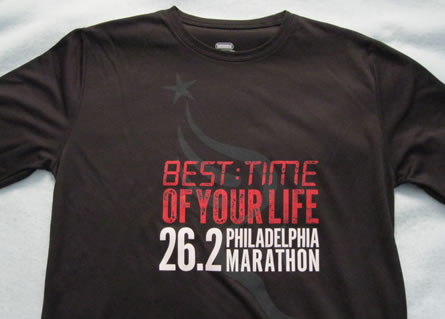 Course Highlights
The race starts on Benjamin Franklin Parkway, heading through Center City on Arch and Race Streets towards the Delaware River, in the shadow of the Ben Franklin Bridge that I’d run across in a race 2 weeks prior! Then it’s south on Columbus Boulevard with the river on our left. South Street & Chestnut Street lead us across the Schuylkill River, through University City and into Fairmount Park where we get to enjoy the only hills on the course, near the zoo. I ran with Smarty for the first few miles – which is kind of a fun challenge on crowded streets with lots of 90 degree turns.

Split Up
I maintained a pretty steady pace, staying slightly ahead of the large 3:20 pace group. There are several out and back stretches that allow you to see how far you are from those who are ahead or behind you by a couple minutes. before mile 12, we started seeing signs directing marathoners to the left and 13.1 runners to the right. Just before we split at the Art Museum, I was slowly passed by Keith Straw (aka the “Pink Tutu Runner”). We exchanged greetings and headed up the river on Kelly Drive.

Falls Bridge Spectators
As always, the Rebel Runner spectators were making lots of noise at mile 17, where we’d cross Falls Bridge to do a half mile loop before crossing back to head for the turn-around in Manayunk. Main Street was packed with cheering crowds as we ran up and down the gauntlet. I could feel the 3:20 group gradually gaining on me but held them off until mile 23 or so. No achilles pain at all and only slight sporadic soreness, but I realized that I didn’t have enough energy for a negative split. Once the pacer passed me, I just wanted to hang as close as I could.

Digging Deep
For much of the race, I felt warm and realized that with a long sleeve shirt plus my club singlet, I was overdressed. Once you’re at mile 22, it never really feels great. You just try to play mind games to get to the next mile marker without giving up. Although nowhere near my 2:13 PR, I was already satisfied that I was giving my best effort and had run a pretty smart race. Once we hit Boathouse Row, it’s pretty much a victory lap, so just keep the legs moving, don’t seize up and don’t trip.

Medal, Banana, Soup
I was strong across the finish and didn’t lose my balance too much while walking through the chute collecting water, medal, and other light refreshments. Didn’t need a foil blanket since the sun was so warm. The food wasn’t spectacular, but a tiny cup of chicken broth tasted good. I spotted my buddies and slowly stumbled around the barricades to meet them for a short walk to our parking lot.

Funny Texting
Smarty had decided a few miles in to switch from Full to Half since he wasn’t feeling well. When Dan texted to ask him why he switched, his smart phone corrected his intended response of “I was feeling lightheaded.” to “I was feeling light-hearted.” That was good for a few laughs until we arrived at Washington Street Alehouse for a celebratory brunch, attended by around 20. I even pocketed a beer bottle for my collection. That afternoon, I’d watch football and rake leaves. How great is that?! 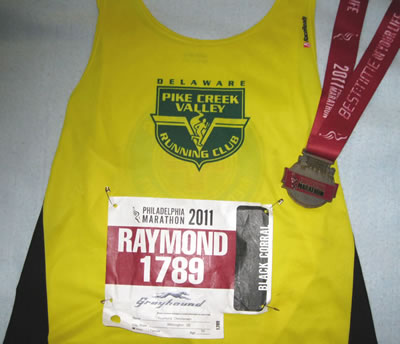 Note:
Unfortunately, when searching for results that evening, I learned that 2 runners had died at the race. One was a 21 year old, racing his first Half. The other was a 40 year old accomplished Iron Man Triathlete who collapsed just before the finish.
Marathons are a challenge. Run safely! 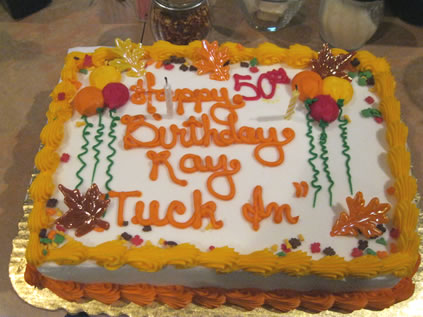 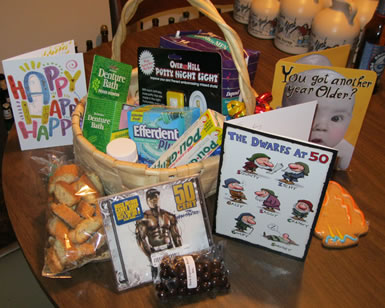 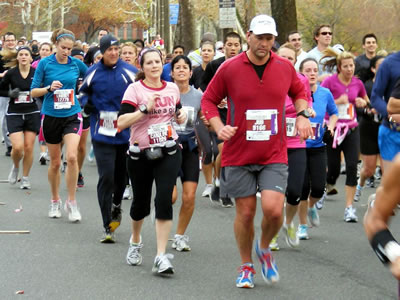 Denise is in the pack – photo by Don 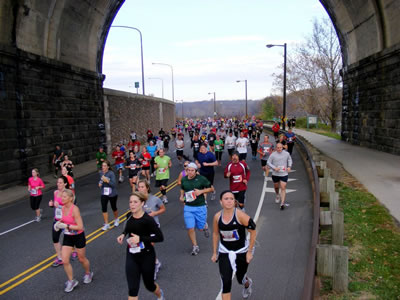 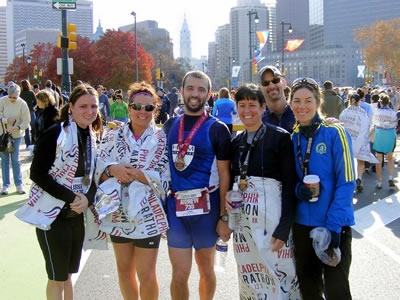 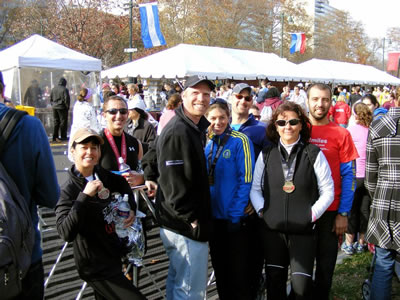 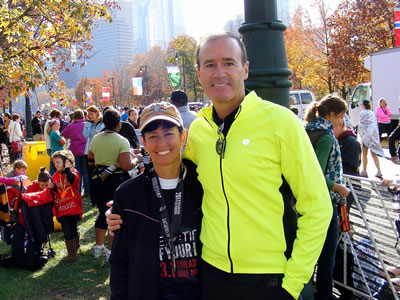 Denise celebrates with our photographer Don 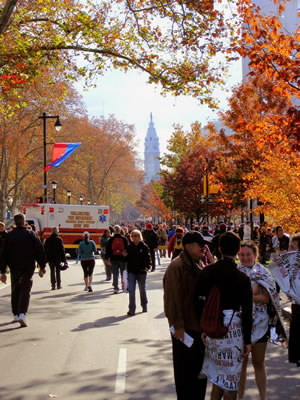 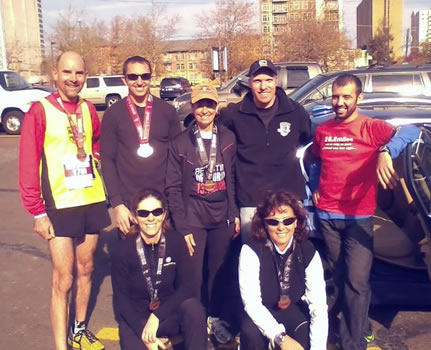