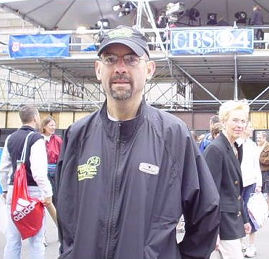 Ray in Boston on day before race

Marathon Man joined the Delaware contingent for the second straight year in their annual pilgrimage to the world’s best known running event.
The Boston Marathon had it’s best race weather in years, with temperatures hovering in the 50’s under cloudy skies.

For Ray, another advantage was familiarity with a marathon course for the first time and he took full advantage. In the 5 weeks since a successful Caesar Rodney Half Marathon, his training had been hampered by illness and a sore left heel, but it was time to be aggressive!

It’s 7:55 on a crisp and sunny morning as I arrive in the parking lot at New Castle County Airport. Runners from all over the First State are assembling to board Gregg’s chartered bus for Boston. 32-time Boston Marathoner Doug White welcomes the group for their annual pilgrimage and confirms the weekend’s itinerary. Our driver, Don, gets us to Boston without delay, where we head for the race expo in South Boston.

At 3:15 pm we immediately collect our bibs and T-shirts. Many of the runners are proudly wearing their 2005 official jackets. Ray just grabs some Power Gels and takes the slow walk around the crowded floor. 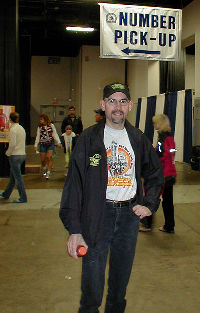 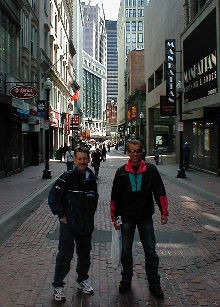 4:45 pm: We arrive at the Crowne Plaza Hotel, Natick, MA – not far from the 10 mile mark of the course. Doug White, our fearless leader, hands out keys and Ray learns that his roommate for 3 nights will be Larry Filtz, who sat out the race last year due to injury. We unpack and walk along the busy Route 9 to grab a bite at Bertucci’s.

645 am: Happy Easter! Wake up, stretch and do some push-ups prior to a shower and shave. Of course, I take my USANA health supplements – Essentials, Procosa (glucosamine), Proflavanol & Palmetto Plus. Another sunny, but cool day. The hotel lobby is quiet, but being prepared for a holiday brunch. Ray gets the driver to take him to St. Bridget’s Catholic Church 3 miles down Route 9 in Framingham. The driver, who had to take a taxi to work that morning, picks him up at 9:15, so he’ll catch the 10am bus back to Boston.

A quick walk around the Expo again and Ray meets up with Ken and Keith to spend the rest of the day strolling around the city. Everything is closed downtown, so it’s Wendy’s burgers for lunch. We then head to Boston Common and sit at a Civil War monument overlooking much of the park on a sunny, but windy day. In early afternoon, the 3 of us walk across the park, passing the Swan Boats to survey the marathon finish area on Boylston Street near Copley Square. 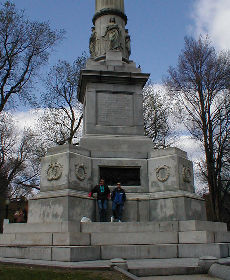 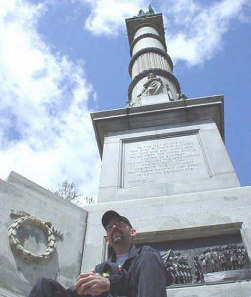 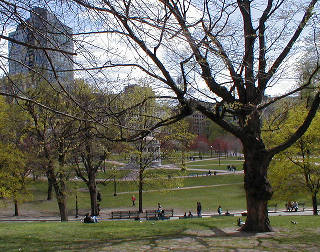 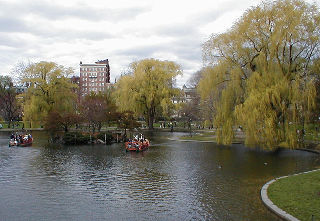 Each of us tests the Porta-Potties and approve. With another couple hours to kill before the Pasta Dinner, we stroll back down Washington St. and hang out in a large bookstore, drinking coffee and talking running. 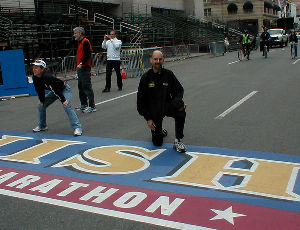 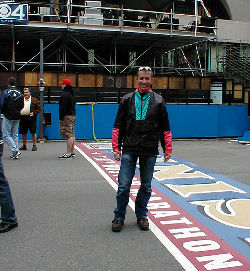 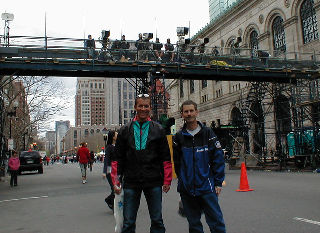 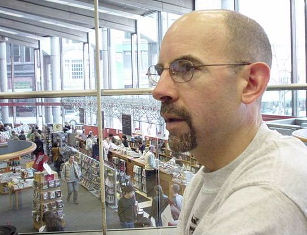 We line up for the Pasta Dinner, which is at the Government Center, but indoors this year, on multiple levels. Good meal! We then line up in the chilly wind to get our apples and chocolate Easter Bunnies for desert. It’s impossible to escape the wind as we shiver for another hour while waiting for the bus to gather us at 7:30pm. The bus is warm. The bus is our friend. 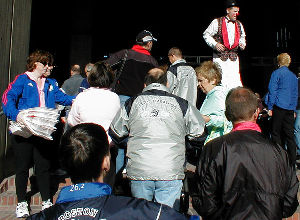 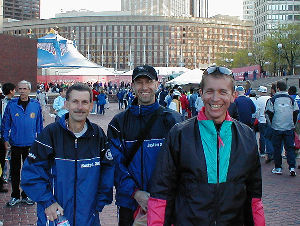 Before and after the pasta dinner

Back to the hotel for the race-eve preparations. Lay out the gear, pin the bib, locate the chip, put gels in the pockets and rest.