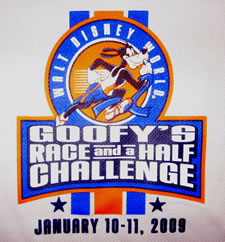 13.1 + 26.2 = Goofy!
As if two consecutive days of racing weren’t enough, Marathon Man encountered the additional challenges of excessive walking around the Disney World parks, a bit of a cold, and a sore left achilles tendon that required a brace to be worn for both races.

Yes, this would be one for the history books! A 1:36 Half put Ray in the top 2% of finishers, despite the tender, overworked achilles. But racing 13.1 miles the previous day is not a prescription for a good marathon result and it was a struggle to finish Sunday’s run in just over 4 hours, my slowest time ever.

Start with Fireworks and Run in the Dark 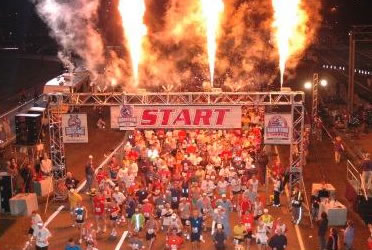 Making the “Goofy Challenge” more challenging
As I mentioned above, a number of factors would make this weekend of races more difficult. The most prominent one was that my left Achilles Tendon had been quite sore for much of the time since Breakers Marathon in October. With little recovery time available due to Disney training, my legs were susceptible to injury, and the achilles has been my weakest area.

I may have been less prepared to race a marathon than at any of my previous 13, since the soreness caused me to cut back on mileage and a few critical speed sessions. That speed work is normally once per week doing six or eight 800 meter intervals. I was simply happy to have taken it easy enough to come to Orlando without pain.

I had a slight cold, but that’s really never been an issue. I figured I’d just add it to the list. A more prominent factor was simply being at Disney. With 4 huge theme parks, there’s absolutely no way to stay off your feet in the days before racing. Walking and standing on hard concrete is bad news.

And for a “kicker”, as I was leaving my motel room at that ungodly hour before the half marathon, I banged my knee on a chair hard enough that I still felt it at the start. The lights were out since my roommate Dan was only running the full marathon. Great!

Half Marathon 1/10/09 – steady pace in the darkness
8 Rebels staked out a spot on the ground in the dark, congested gathering/bag drop area. It was a considerable walk to the starting corrals for about 20,000 participants each morning. Some music and words of encouragement before the start and then at 5:50am, fireworks lit up the sky as we started our run.

Marathon Man was in Corral A, Wave 1. Not alot of fast runners at Disney, since some of the more serious ones need to conserve energy to do both races. Many others simply like to take it easy and enjoy the venue. The Half starts outside of Epcot, loops to and around the Magic Kingdom and returns to Epcot for the grand finish.

The first 5 miles (all on roads) was quite dark. On one stretch, we were separated from oncoming traffic by cones, but the headlights were blinding. One nice thing about arriving at the Magic Kingdom was that dawn light was finally appearing. It was loads of fun running through the park with rides lit up and music playing. Many Disney characters and employees were there to supplement other spectators.

Water stops were plentiful, large, and cheery. I grabbed Powerade at almost every opportunity. By the time we emerged from Cinderella’s Castle, it was reasonably light. I had quickly scrapped my plan of monitoring my pace by my watch and just tried to keep up with traffic. Wearing my ankle brace, I sometimes felt achilles soreness but was not hampered by it. I maintained a steady pace and even though my 1:36:48 was well off my 1:31 PR, I was content upon crossing the line back at Epcot. That turned out to be good for top 2% of runners overall, but I knew I’d be paying for it the next morning!

It’s pretty sweet to finish 13.1 miles by 7:30 am and still having the whole day to enjoy!

Marathon 1/11/09 – Goofy made me work for it
Bus, wait and walk to the start all went like clockwork, although I didn’t need the extra frustration of a long potty line. I made it to my corral with just minutes to spare. My original plan was to run the full without my brace, but that changed when it had remained fairly tender since the Half.

This was my 14th marathon, but I had no idea what to expect or what the best pace would be to start at. Knowing I’d probably slow, I started behind the 3:30 pacer and his balloons. By mile 8, even though I could still see him, I knew I was starting to drop. The good news was that with an initial 3 mile loop around Epcot, the roads were a bit lighter than the previous morning. For the 2nd day in a row, I particularly enjoyed a long stretch of speakers playing rock tunes before entering the Magic Kingdom again for mile 10.

On hitting the long stretch of road toward Animal Kingdom, I felt my energy dissipating with each step. I thought about walking as early as mile 14! After losing the 3:30 group, I really had no back-up plan for pacing, so I just tried to maintain form. I could feel my achilles, and now my right knee was also getting sore. Add that to my fatigue and my stride was now off. I said to myself: “Don’t walk until 16, don’t walk until 17…”

Miles 16-18 were directly through Animal Kingdom, where we’d spent much of the previous day. The (comical?) photo at right shows my struggle just to keep moving. I finally slowed to a walk in the parking lot. After a minute, I tried to jog, but suddenly my quads were cooked!!! I walked again and really started to panic when looking at my watch. If I was forced to walk the rest of the way, I was looking at a 5 hour marathon. Suddenly, 7 miles seemed like a very long way to walk.

I felt the “agony of defeat” even before approaching the Wide World of Sports area, as runners were steadily jogging past me. Our Rebel Support Crew appeared at mile 19 and I grabbed a bottle of water which I’d eventually carry the rest of the way. It was now sunny and warm. Around mile 20, was a horrible “out and back” loop on kind of a narrow stretch of road. Shaggy and Dan both passed me. I took advantage of walking by eating a banana and drinking extra powerade.

My quads continued to be my biggest barrier to running. I broke into a jog a few times, but happily applied a handful of “Bio-Freeze” that was offered at many of the first aid stations. They had huge gallon dispencers. It worked! The soreness and stiffness melted away enough that (after grabbing a little Hershey’s chocolate bar at mile 22) I found the strength to run again. Now we were at Hollywood Studios and the last 3 miles of the race were very pretty. I realized I’d be able to run to the finish and had a shot at 4 hours.

Circling the beautiful lakes at Epcot (and hearing Billy Idol’s “Rebel Yell”) and I was as energized as one can feel at that point. Plenty of spectators, now that it was after 9:30am. I was relieved to cross the line and happy to get my Mickey medal. After sipping more powerade and attempting to stretch, it was time to have my Goofy wristband cut off. I had earned the Goofy medal that was placed around my neck! 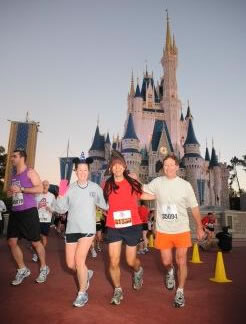 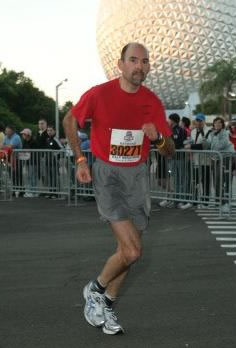 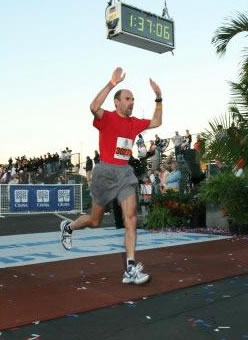 Triumphant finish of half marathon 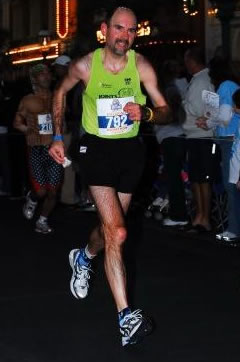 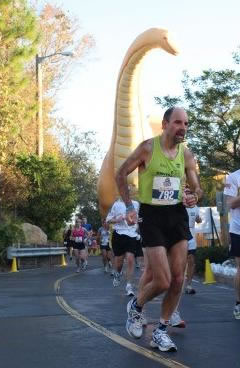 Help! A dinosaur is chasing me! 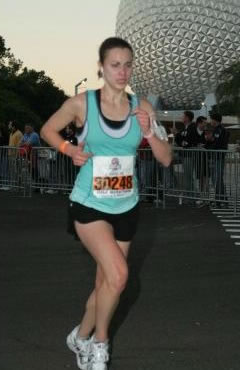 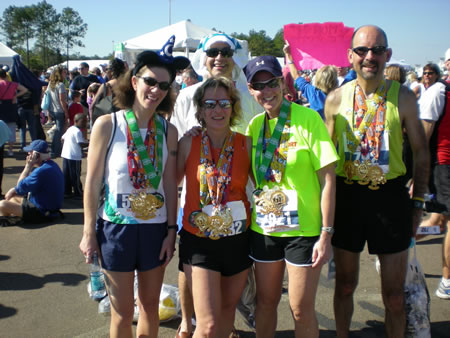 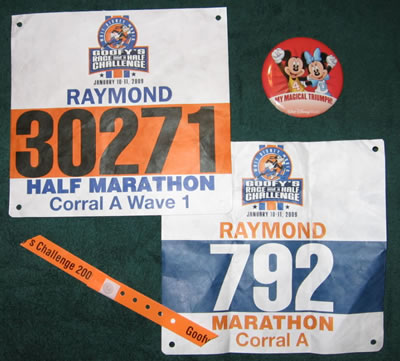 Race medals for half, full and Goofy Challenge!   (Goofy messed up the order)