Marathon Man had been looking forward to running Chicago for over 12 months, due to the flat, fast course.

On October 10, 2004, I set a PR at the Chicago Marathon in the glorious sunshine. In fact, with a chip time of 3:19:46, I qualified to run the Boston Marathon!!! My 3 Arthritis Foundation teammates also set personal records.

Over the past 3 years, my friends and family have helped me raise over $8,000 to combat Arthritis. It’s especially meaningful to me to run for this cause, since my father has had shoulder replacement surgery on each arm! Thank you!

Friday 10/8/04 – Travel, Traffic, Race Expo, Red Roof Inn
After a great performance at the Paris Marathon in April, it was time to raise the bar and take the first shot at qualifying for the hallowed Boston Marathon. Three fellow alumni of the Joints in Motion team would join me.

A typical “Marathon Man” day: I worked from 10pm to 4am, drove home for a 2 hour nap and headed to Philly airport for our 10am flight. The Economy Lot was full, so I was directed to another lot. The ticket counter line wasn’t moving, but the self-service machine rejected me. Back to the barely moving line until I finally reached the gate just barely 5 minutes before boarding commenced. The rest of Team EPA was assembled and we sat together on the flight to O’Hare.

It was a dreary, rainy day in Chicago. After grabbing a bite at an airport hotel restaurant, Bill rented a car and we sat in traffic on I-90 all the way downtown. The Red Roof Inn was conveniently situated in the “Magnificent Mile” section, the prime shopping district. We hiked down Columbus Avenue through Grant Park, past Soldier Field (complete with the ‘spaceship’ that appears to have landed on it) and on south to the race expo, held in the enormous McCormick Place convention center.

Armed with our race bibs, timing chips, free Tylenol, T-shirts and running propaganda, 5 of us squeezed into a taxi to an Italian restaurant on the race course. When John and I arrived at our room, it was time to flip between a Presidential Debate and a baseball playoff game. 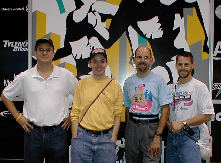 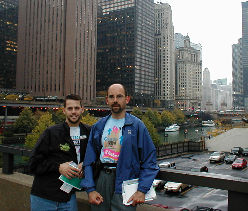 Bill & Ray in The Loop

Saturday 10/9/04 – Morning run, Sears Tower, Pasta Dinner, Relax
We decided on a brief 25 minute run along Lake Shore Drive at 830am on a bright, sunny morning. Then, John and I walked through downtown to spend 90 minutes on line to visit the Sears Tower Skydeck for magnificent views of the city. The entire marathon route was visible and we took our time taking pictures. Then we strolled back through town to meet Dave and Jeanine for a hearty lunch. 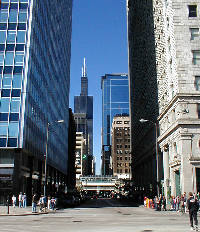 There was no time for a sightseeing cruise on the Chicago River, so we enjoyed more baseball until it was time to head to the Hilton for the 6pm Dominick’s Pasta Dinner. The spaghetti was fair and there was little entertainment other than a sped-up video of the race course and some remarks by Hal Higdon and Joan Benoit-Samuelson.

A taxi got us back to the hotel in time for some relaxing and more baseball playoffs as we layed out our gear for a 5:30 wake-up on Sunday morning. 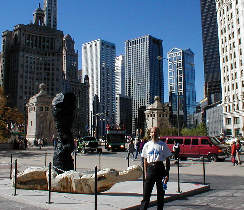 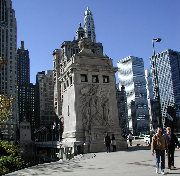 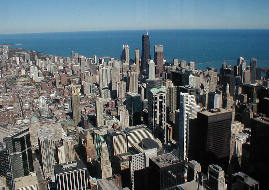 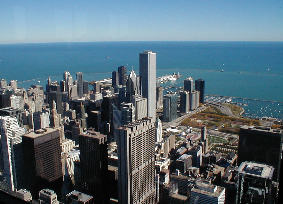 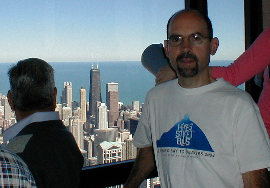 PAGE 2 OF CHICAGO TRIP: THE RACE