Training and racing in the heat
The year started with serious training for the Paris Marathon in sometimes brutal winter conditions. After Paris, finally some 5K races!  On this page:

Think First 5k – April 29, 2004 Marathon Man’s first 5K race!
Three weeks after the excitement of Paris, Ray finally got around to running his first 5K race at Christiana Medical Center on a cool and clear Thursday evening. A number of the Rebel Runners were in attendance.

I was actually nervous, since my training had always been geared to longer runs where speed was less of a factor.

My strategy was to go out with the leaders and take it from there. My pace turned out to be a good one, since I was afraid of starting too fast or too slow. I was hoping not to have too much gas remaining in the tank at the finish and I was satisfied with the result. For much of the 3.1 mile race around the parking lots surrounding Christiana Hospital, I was a few steps behind a female runner. I caught her near the turnaround and held her off until she finally passed me in the final 200 yards. She was the top female finisher.

I came in 12th place overall, and 4th in my division.
Time was 20:28. A great result for my 5K debut! It was nice to have several friends in the race. The winner, Chris “Smarty” James, works for the race sponsor, not to mention being a fellow Paris Marathoner! 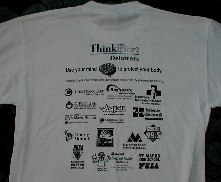 The Rebel Runners decided to make a real event of the Broad Street Run. Rich brought most of the group up to Philly in a mini-bus and we parked at the Sports Complex, where we’d hit a Phillies game after the race. We gathered at Jack’s place in Wilmington, where we loaded the bus and set off on the 45 minute drive, with the typical rest stop to make it seem like a real road trip. After parking, we boarded the SEPTA subway train along with 10,000 other runners for the ride to the north side of town.

Weather was good. 63 and overcast, though a little humid. We had plenty of time to stretch and hydrate at the staging area at a high school track. Then we endured a 20 minute delay at the start line due to a small fire on the SEPTA subway line we had just taken. I started in the 7 minute pace group along with Greg, Rich and Smarty.

Broad Street is a flat course, touted as the “fastest 10 miler in the U.S.” and it is! In 2003, I ran it in 73:29, so this time, I’d shoot for a flat 70:00. I maintained the pace well, checking my watch at each milemarker. This is a fun race, since not only does it make you feel fast, but there is decent crowd support. Of course, a fair amount of the spectators are actually people just trying to cross the street! Bad timing, as they must wait for 10,000 people to pass. Their other option is to gamble and try to sprint across Broad Street at the risk of being trampled. This is dangerous, and something for runners to watch out for.

I crossed the finish in 70:04, a bit disappointed that I was just not able to take off those extra few seconds! But it was a successful race overall, and I’d enjoy the food and drink that was awaiting us. Our group found each other while we stretched and re-fueled. Then we headed back to the parking lot to have a pleasant tailgate party for a couple hours before heading over to the new Citizens Bank ballpark for an exciting extra-innings baseball game.

If a “Marathon Man” award was presented, it would have to go to Lori, who did the 10 mile race, added another 6 miles of training, showered in the parking lot, attended the baseball game, and then headed to the ice arena for a Flyers playoff game!!!! That’s a long day of sports. 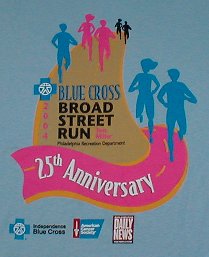 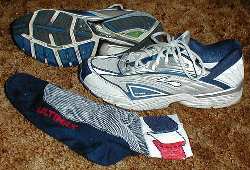 Brooks Trance – after 2 marathons and 400 miles

This is a popular local race on the Friday evening before the weekend festival at Rockwood Mansion on the north side of Wilmington. Again, several Rebel Runners were involved. In fact, Greg formed a team of us, including Don, Greg, Darlise, Rich and myself. Only the top two males and a female were taken for the official time and our team was victorious! Too bad Ray’s time wasn’t needed 🙁

The course was quite hilly, winding around the park before heading out to a local neighborhood street for the middle portion. I ran conservatively, to have enough juice left for the final uphill portion back inside the park near the finish. At one stretch on a flat portion, I ran stride for stride with a 14 year old kid, only learning later that he was the son of my first running mentor, Greg (my boss at QVC).

It was difficult, but satisfying – especially when I located the abundant supply of free bananas, oranges and soft pretzels. Finally, ice cream and some iced tea and it was time to rush home to prepare to head to work. 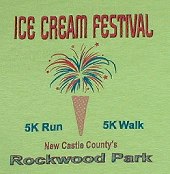 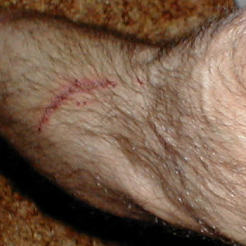 The only thing less pleasant than training in the cold of winter is training in the heat of summer! I had been considering the Chicago Marathon since the latter part of 2003, mainly because it’s a fast, flat course. I need to take eleven minutes off my Paris time to qualify for Boston, so I’ll take a shot in the Windy City!

Three Rebel Runners ran Chicago last year and did well. I continue to run with the group on Thursday evenings at Delcastle (5-7 miles). After choir started our summer hiatus in June, I was able to also join them for Sunday morning long runs. My first “Bagel Run” with coach Dave was a long, slow tour of White Clay Creek Park. Asphalt roads turn into paved and gravel paths, and finally into dirt trails. Of course it was a hot an humid July day, but my lasting impression would be the bruise I got from a fallen tree limb that I failed to see. It whacked me pretty hard, but wasn’t too bloody.

I’ve been satisfied with training so far, staying close to my PR’s at Delcastle for 5 and 7 miles, even in the heat and humidity.

August long runs have seen increased mileage. A good 2 hour 40 minute run along the Brandywine in Wilmington felt good, even with my blistered heel. On 8/15, I ran loops at Delcastle. I had had a dream of running Chicago just an hour prior! After 14 miles, the wheels fell off and I nearly had to crawl to get in 5 more miles. Out too fast? Too little early hydration? Just a bad day? Afterwards, sitting in front of the TV to watch the Olympics was all I wanted to do.

Olympic inspiration – after watching the Men’s Olympic Marathon (2nd place for USA!), I put in 20 miles of my own in the beautiful Catskill Mountains of New York State. While visiting family, I ran the 17.3 mile loop around Rondout Resevoir, surviving the heat, humidity and hills.

Pike Creek sent a good number in the group of over 7,200 finishers. The accompanying 5K Classic had over 600 finishers. Richard Webb, now 60, won his age-group with a gun-time of 1:26:33. Below are listed the club members with their chip times that I could find. I apologize if I missed anyone:

Start of race on Market St.

Taking advantage of all these runners in Philly, other Pike Creekers ran well in the Madison Tibbs 5K for SIDS:

Don’t forget that the Delaware Distance Classic is only three weeks away on October 10. We want anyone who doesn’t have plans taking you out of town to participate or volunteer. 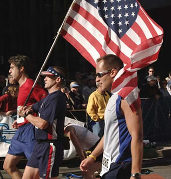 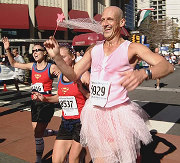 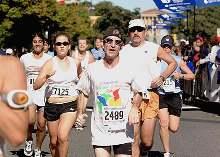 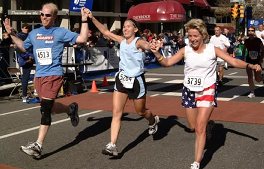 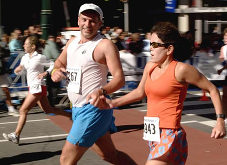 Always time to enjoy the scenery!