This race is dedicated to my parents. They made me tough!

Glory in the Big Apple!
The 2003 ING New York City Marathon was glorious! Spectacular Nov. 2 weather brought out large crowds to cheer on the runners.

Native New Yorker P. Diddy (alias Puff Daddy, aka Sean Combs) stole the spotlight from the Kenyans, who swept the first three places in both the men’s and women’s divisions. However, he was no match for native New Yorker Ray Christensen!

P. Diddy, a rapper (and, of course, J-Lo’s ex) had heavily publicized his run, to raise money for charity. According to associates, he raised over $2 million, much of it for NY City schools. Meanwhile, I was trying to raise the last $600 I’d committed to for Arthritis Foundation for 2003.

See my official NYC results at NYC Marathon. My number was 13115

Unforgettable Experience – New York City Shines!
Runners visiting New York for the first time will not soon forget the support and admiration they were shown. The organizers of this huge event did a spectacular job, allowing participants to concentrate on the race and enjoy the atmosphere. The local citizens of every nationality gave their all to cheer on runners and help push us to the finish line.

Destiny Beckons – Crossing the Bridge by Car
My Friday afternoon drive from Delaware to New York took over an hour longer than usual due to traffic. As I crossed the Verrazano Bridge, I realized I’d experience similar congestion on Sunday when doing it on foot. Seeing the bridge closure signs and listenning to “Marathon updates” on CBS radio brought me that tingle of excitement for a big event. I was wearing my Dublin Marathon “finisher” shirt for extra motivation and arrived at “base camp” (my brother’s house) an hour before my parents flew in from Costa Rica, where they’d been on vacation.

More Inspiration – The Expo, St. Patrick’s, and Pasta!
On Saturday, I drove to the subway to catch the E train to Manhattan, then walked to the West Side for the Marathon Expo at the Jacob Javits Convention Center. The first of many long lines was 200 meters long outside and wove up and down inside for 20 minutes before I received my race bib, timing chip and goody bag. Then I spent an hour wandering around the many displays (running gear, marathon information, free samples of bars and gels, etc.).

It was approaching 4:30pm when I got on line for the shuttle bus to head across town to hit 5:30 Mass at St. Patrick’s Cathedral. I sat with a Japanese-American woman from Jersey who had lived in the Bay Area for a number of years. She had done New York several years ago. With all the traffic on a summer-like evening, I barely got to the very full church on time! After praying for strong, injury-free race, I dropped by Rockerfeller Center to watch people ice-skating in 70 degree weather, before heading up to Central Park for a 7:30 seating at Tavern on the Green. 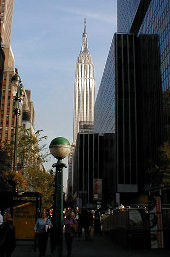 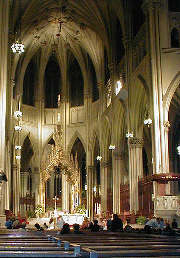 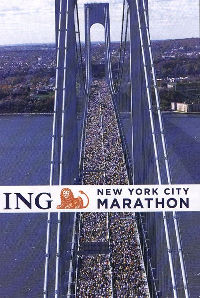 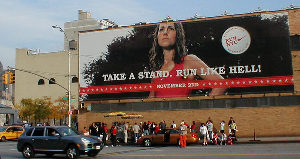 I walked up 7th Ave. and into Central Park. Before long, I found the famous blue line (the marathon course) and followed it past the empty grandstands to the finish area adjacent to Tavern on the Green. When a German couple asked me to snap their picture, I made them return the favor. It felt like walking on a major league baseball field in the dark when there’s noone around. The line for the Pre-race Pasta Dinner stretched nearly a mile up the west side of the park. I was stood in line throughout the fairly impressive fireworks display, knowing that I was taking away from sleep time. But this was New York, and I wanted the complete experience! I traded my admission card for a Ronzoni hat and approached the tent at 8pm. 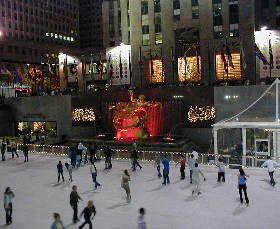 As I mentioned earlier, the organization was impeccable. Volunteers herded us into the food tent, telling us to move quickly and get out as soon as we were done eating. There was much Ronzoni pasta to be served and many hungry runners! My plate was piled high. It was good. My table had people from Texas, Virginia and Wales. An announcer was calling out different states and countries and those runners would scream and applaud. On my way out, I got some ice cream and a New York apple to eat as I headed back to the subway. 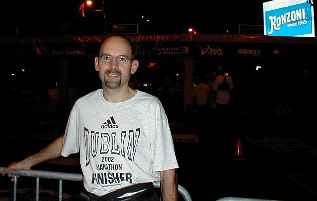 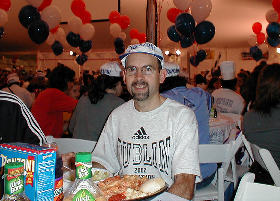 A long commute after a short night of sleep
It’s strongly recommended to get more than 5 1/2 hours of sleep prior to running a marathon. You might say that I ignored this conventional wisdom. My alarm went off at 4:30am, I ate some Raisin Bran, took my mega-vitamins, stretched a little and suited up. At just after 5am, I slipped out the door and drove 8 miles to the Continental Avenue subway station. My heart skipped a beat when I saw a locked gate at the first entrance I tried, but down the street the gate was open and I took a seat next to several silent people waiting for the F train. Within a few stops, several marathoners boarded and when we got off at 42nd Street, we joined thousands of runners being lined up outside the main NY Public Library to board busses to Staten Island.

Hundreds of smiling volunteers wished us “Good Morning” and “Good Luck”! I sat next to a Costa Rican runner who was shooting for a 3:15 time. As the sun rose, we toured the south part of Manhattan before taking the tunnel to Brooklyn. By 7am, we had arrived at the staging area at Fort Wadsworth. 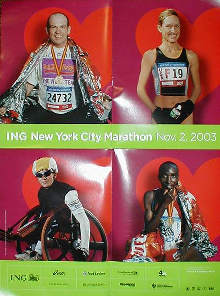 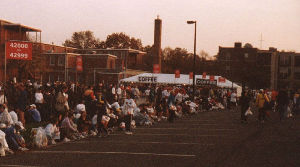 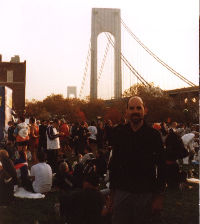 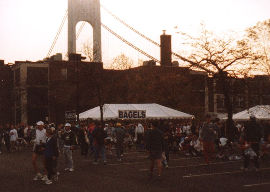 The Wait – Food, Drink and Port-A-Potties
The pleasant atmosphere of a county fair in full swing (along with more smiling volunteers) greeted us at the staging area in the shadow of the Verrazano Bridge. We lined up for coffee, bagels, yogurt smoothies, and plenty of water as a band from California played live music from a stage. UPS trucks were lined up everywhere to take our bags of supplies to the finish line. Port-a-potties stretched as far as the eye could see. We would be herded into our corrals at 9:30, as the elite women were starting. Race time was 10:10am. 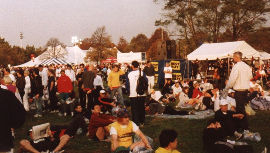 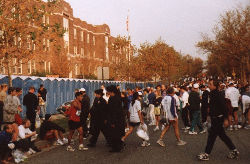 Main Attraction – P. Ditty arrives
I was on line for the potty when a siren sounded behind me and some flashing lights appeared. It was none other than Sean “P. Ditty” Combs making his arrival. He waved and runners applauded. He had been drawn plenty of attention to his run to raise money for children’s charities. His goal was to beat Oprah’s marathon time and finish in under 4 hours in his first marathon. Combs, 33, had been training for just 3 months. Everyone was familiar with his cause and his Diddy Runs the City website. Race day was no different. Many spectators were waving his posters [at right] and asking, “Where’s Diddy?” Several runners sported messages asking the same question. The Kenyans were probably jealous! 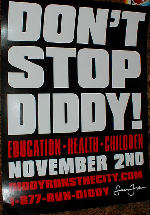