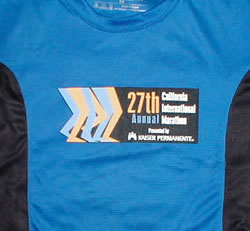 Marathon Man chose this race to incorporate a visit with friends in the Bay Area, but also because of the fast course. A PR (3:13) would be within reach, even though some Achilles soreness flared up in the final weeks of training. However, it turned out to be a tough day.

The 27th Kaiser Permanente California International Marathon was run on 12/6/09 in frigid weather. The 31 degree starting temperature was actually the coldest of all of my 17 marathons!

Flight, Friends, Expo & Pasta
A Thursday evening run and Rebel send-off dinner at Cafe Napoli fueled me up for a Friday morning flight from Philly to San Jose. The only thing that slowed me down was a 3 hour layover in Phoenix. Spent Friday night at Bill’s place in Castro Valley, then headed to Chris & Wendy’s in Sacramento, dropping into the Race Expo enroute for chip and bib. Pasta dinner downtown and then lights out at 10pm. 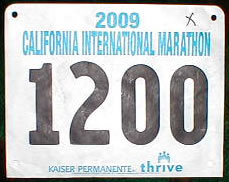 Up at 4am to find a good parking spot near the Convention Center in downtown Sacramento at 5am. Fast loading of buses was appreciated with temps around 30 degrees. 40 minute drive to the start in Folsom. Typical excited chatter on the school bus. Many locals (such as my seat-mate) run the marathon, besides 1,000 four person relay teams. Last year had been similarly cold, but with fog to make it extra dreary.

It was great being able to stay on the warm bus, quite close to the start. They’re proud of their “best in the nation” port-a-potty to runner ratio and I disembarked the bus just in time to get on line. Although I removed my throw-away shirt at the start, this may have been my coldest marathon!

Running to stay warm
The 7am start for 7,500 marathoners was on time, but fairly narrow roads led to moderate congestion for the first 2 miles. I was just a little behind the 3:10 pacer, with his red, rectangular sign. Missed out on first water stop since I was in the middle of the road. Because of the cold, it felt great to get moving, and if it weren’t for being so packed in, I could have easily gone out too fast. By mile 3, I was just ahead of the pacer (and his big pack of runners) and remained there thru the half.

Cold & Sticky
The course is consistently flat to gently downhill sections and occasional brief and mild uphills. Just a few 90 degree turns. A lady wering antlers was in the vicinity, so I’d hear appreciative comments from the small groups of brave but bundled up spectators. I was happily comfortable with the pace and my body parts. Only started feeling exertion near the half. First real problem was openning my strawberry Power Gel around mile 12. My magic gloved hands weren’t uncomfortably cold, but were numb enough to make tearing the top difficult. I used my teeth and took about a half mile to open it, getting gel all over my gloves in the process. I also started getting aggravated by occasional frigid headwinds.

Starting to fall apart
I fell behind the 3:10 group at mile 14 and they slowly pulled away, dropping me from sight by mile 16. Dreams of a 3:10 ended and my upper thighs were rapidly tightenning, so hopes of a (3:13) PR were next to be left to die on the cold pavement. My frustration grew, since I had the energy, but not the legs as my pace slowed to a jog. By the time the 3:15 pace group passed, I had considered stopping to stretch but didn’t since I’ve never done so during a race. Mile 20 wasn’t significant since I’d already hit the wall.

Admitting defeat, but gutting it out!
I eventually walked for 2 minutes, in hopes of regaining energy for a respectible last few miles. It was a good decision and at least I had some remnants of a stride while passing the larger crowds in the final mile. A fun finish of 2 left turns and separate finishing lines for men and women. Each runner’s name was announced. Just before grabbing water, I saw my friends Chris & Wendy and we agreed to meet at the Christmas tree in front of the capitol steps.

Always a unique food item
Bananas, Bagels & Bars. Each race seems to have it’s own signature food item and in this case it was pancakes, handed out plate by plate from a tent. A table had a huge vat of syrup, monster slab of butter and trays of strawberry topping. They tasted great, even though they quickly got cold.

Chris & Wendy have lived in Sacramento for years, but had never before been to the marathon. Wendy showed me a photo that she’d snapped right before my finish and mentioned that a few minutes earlier had photographed a guy finishing in a pink tutu. I immediately wondered if it could be Keith Straw, well known in the Philly area for his signature outfit. She showed me the pic on her camera and sure enough, it was him! (Beat me by 5 minutes.) They enjoyed watching the finishers and later looked up the results of several of their friends who ran.

Photos & beer
Wendy got a great pic of me eating my marathon pancakes while the foil blanket fluttered in the breeze. At least the finish area wasn’t as cold and windy as Boston had been in April! After explaining my disappointment with my time, I let my friends get on their bikes to ride home, where I’d catch up with them after a 64 calorie beer — which at this point was like giving away snowballs in winter. It was still really to cold to drink a brew, but it tasted good anyway.

Thank God that even with a sub-standard performance, completing the 26.2 still gave me a runner’s high.

To get back to my car, I had to walk around the finishing chutes and some of the final mile, so I stopped a couple times (when the sun peeked out from the clouds) to cheer on the 4:30+ finishers. I offered words of encouragement like “Hurry up before the beer runs out!” and “Cold beer waiting at the finish!”. Seeing the determination on their faces reminded me how proud I am to be one of them.

Finally some warmth & comfort
Just as I’m regaining some feelings of pride and toughness, a final insult of the race was that my car was now covered with bird droppings. But I got in the warm Kia, sat down with little groaning and life was good again. 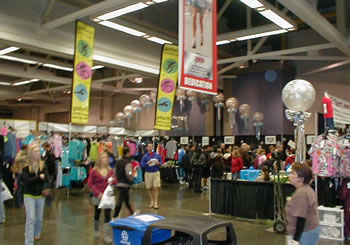 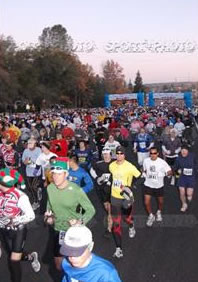 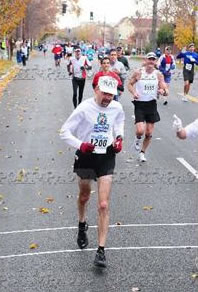 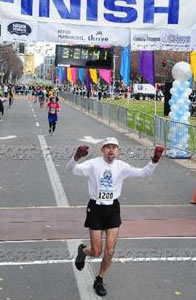 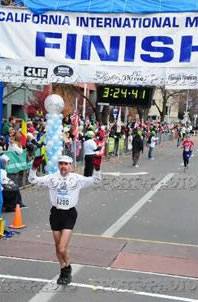 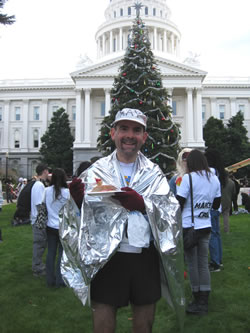 Pancakes for the runners! 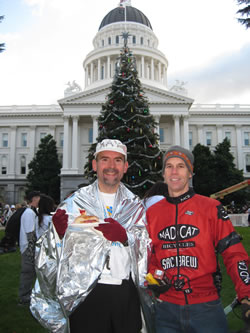 Special thanks for their hospitality to all my great friends who hosted me during my California trip:
– Bill, Chris & Wendy,
– Craig & Susan,
– Bart & Veronica 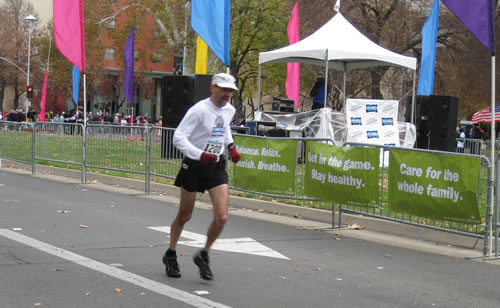 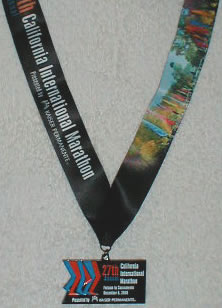 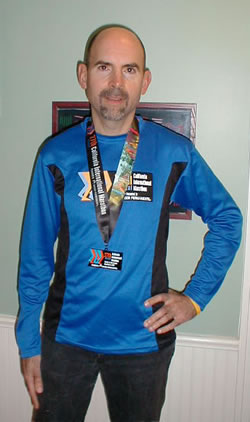 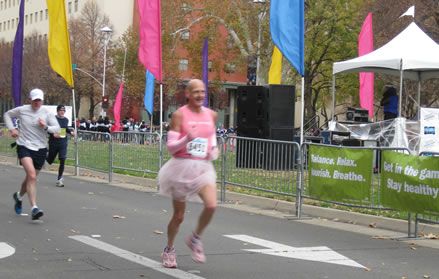