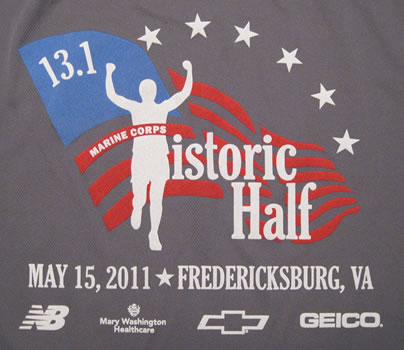 RRCA Convention (Road Runners Club of America) was held in conjunction with this sister race to Marine Corps Marathon. I had recently been appointed Delaware State Rep and registered for the race upon invitation to the weekend activities.

The Marine Corps Historic Half was run on a rolling course on Sunday, May 15 in warm, humid conditions…

RRCA Annual Convention
The RRCA convention is always timed to coincide with a large race, so while of my friends were running or volunteering at the Delaware Marathon, I ran this race in Fredericksburg, VA. Drew Carey (a former Marine) was our celebrity runner and ran his first Half in under two hours. The race director, retired Marine Major Rick Nealis,
told me that at the Expo kick-off they had meant to play up Drew’s participation by staging a little “Price is Right” game with nominal prizes. But Drew jumped right in and took charge. Not impressed with the prizes (shoes, shirts), he started doubling them up so that the organizers had to scrounge up more prizes.

Humid & Wet
The days leading up to Sunday were humid, with occasional showers. On Friday morning at 6am, Thursday, our RRCA group took a 20 minute bus ride to the Spotslyvania Civil War battlefield for a 6 mile run on roads and trails. Saturday’s fun run was up and down the streets of Historic Fredericksburg and along parts of the race course. Several ladies from the Fredericksburg Area Running Club led us up and down the streets in a fine mist.

During Saturday evening’s awards banquet, we watched a lightning storm through the windows, but the only rain on race day occurred before we boarded busses to the start. We battled warm, humid conditions, but had the Marines to inspire us, and plenty of spectators to cheer us on.

Warrior Song
Rock music helped us warm up in the gathering area and once in the corrals, the Marine’s “Warrior Song” provided additional inspiration. Drew Carey made some welcoming remarks and fired the start pistol. He then quickly headed off the platform to start running.

6,000 finishers (plus some relay folks) ran a sometimes rolling course featuring downtown historic Fredericksburg and well kept neighborhoods. The funny thing is that the guy I roomed with (Blaine from Maine) departed very early that morning to drive to Delaware to run our marathon, and then back to DC to catch a plane home.

Being a sister race to Marine Corps Marathon, of course the logistics were handled wonderfully. It’s a good race to consider, with decent spectators, choice of beer at the finish and Gatorade available at every water station. The loop course features mainly downhill for first couple miles, with a complementary uphill just when you don’t need one at mile 10-11.

It was fun watching for well-wishing signs for Drew Carey, as well as the typical “have a great, daddy or mommy!” held by little kids mesmerized by passing runners. There were a fair number of musical groups supporting us as well.

Rolling Hills
The hills help me relax a bit, since it seems pointless to worry about maintaining a steady pace. Shooting for around a 1:40, I was pleased to finish in 1:37:20 and was happy to brag about placing 10 of 403 in my 40-49 age group!

While eating a banana and bagel, I got my best compliment ever when another runner passed by and told me that in the home stretch I was “running like a bat out of hell!”… but since it’s a humbling sport, that also reminded me of the guy who wizzed past me just as I was starting my final kick. 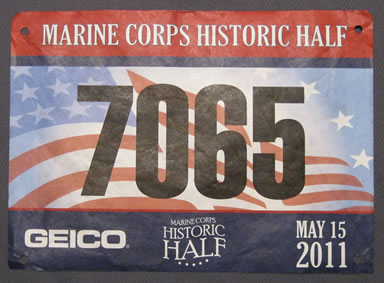 FREDERICKSBURG, VA (May 15, 2011) – The Marine Corps Historic Half welcomed 5,679 finishers including runners from all 50 states to the finish line in Fredericksburg, VA. Law student Lanni Marchant (27), from Lansing, MI, set a new course record among women today completing the 13.1 mile event in 1:21:27. Wyatt Boyd (26) of Washington, D.C. finished first overall with a 1:13:53 finish time.

“It was really hard and pretty humid but there is no other race like this out there,” Boyd said just after breaking the finishing tape. “Running under the American flag with the firemen really gets you pumped up toward the finish.” Boyd also was the MCM10K first place finisher in 2009, running 32:54.

Comedian Drew Carey, who fired the starting pistol and then ran his first half marathon, made a surprising finish of 1:57:02. “The Price Is Right” host expected to complete the run in just over two hours. “Never in my wildest dreams did I think I would finish in two hours, it really felt good,” said Carey. “Let’s face it, with all of these Marines around, I didn’t want to stop or drop out … I did not want to embarrass myself … that was a great motivator.”

The Semper Fred 5K that immediately followed the Historic Half featured Olympian Billy Mills serving as starter. The 664 finishers were led by Jordan Zwick (24) of Arlington, VA, who finished first overall completing the 3.1 miles in 19:12. Not far behind was the top female finisher Molly Roohi (30) of King George, VA. The Fredericksburg school teacher finished in 19:41. 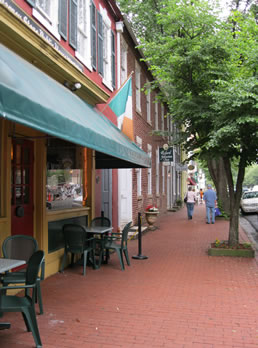 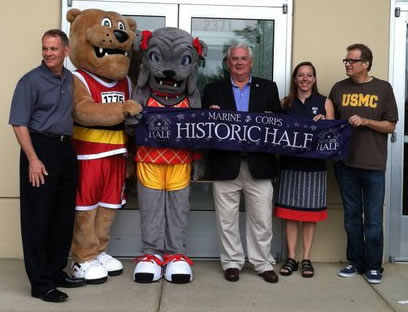 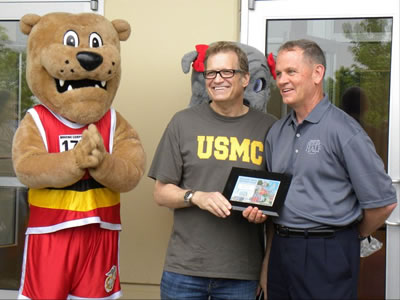 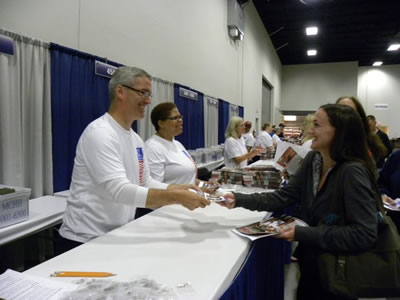 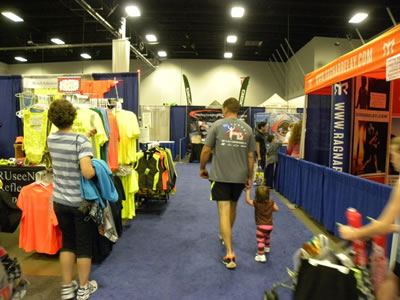 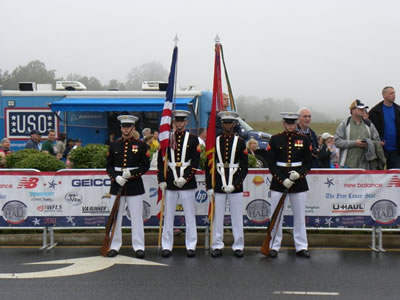 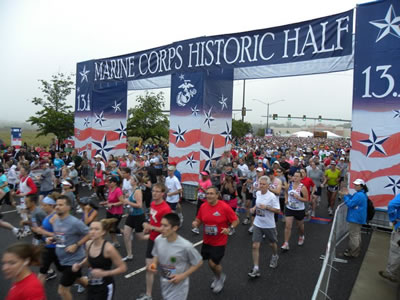 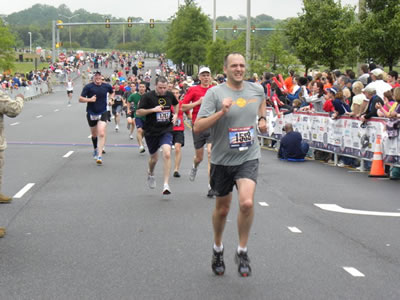 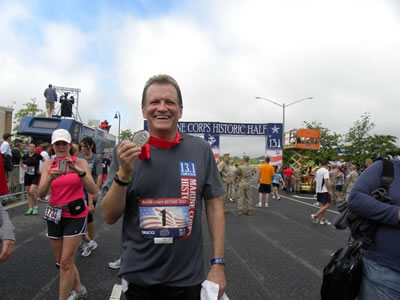 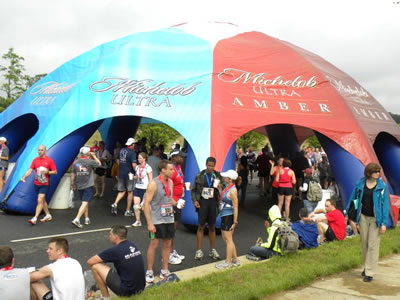 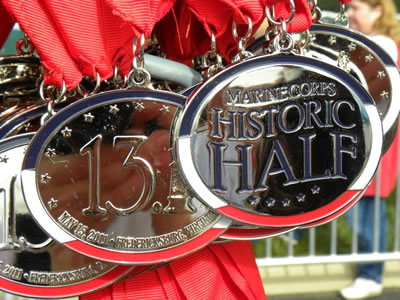 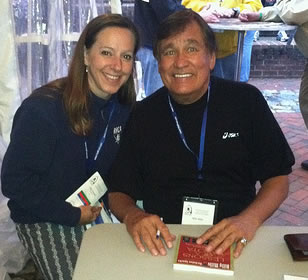 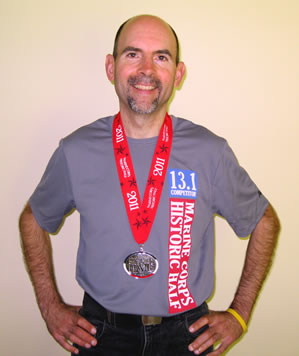 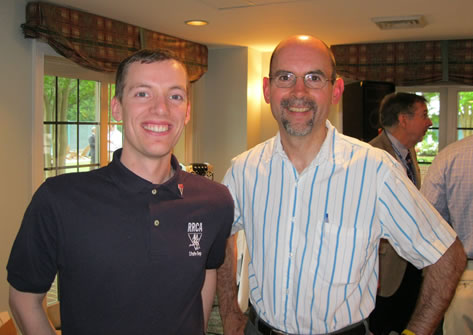 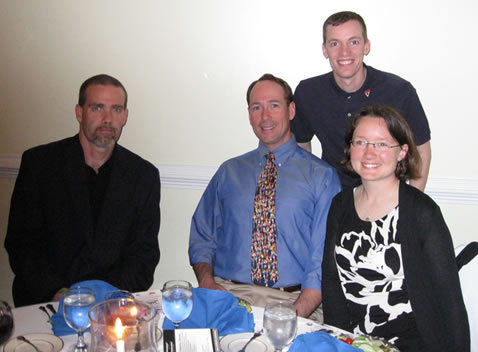