If ever a race epitomized the term “war of attrition,” this year’s male division of the Boston Marathon was it. A large pack of 20 or more men bolted from the starting line in Hopkinton as the clock struck high noon; all of them expected contenders – including the most favored Americans, Alan Culpepper and Ryan Shay, who placed themselves among that group; and all settled in for the long hard drive along 26.2 miles of Massachusetts blacktop.

On the women’ side, the elite field dashed off the line 29 minutes before the 20,000 others followed. Catherine Ndereba trailed the leaders for the majority of the race, and at 5k, she was trailing by 23 seconds. But the 2004 Olympic silver medalist and second-fastest woman in history waited for her legs to respond to her will, to take her down the familiar path to victory, to bring her closer to her destiny. At 10 kilometers, she was 59 seconds behind; at 15K, 1 minute and 11 seconds; at the half, 1 minute and 20 seconds. Still she waited, believing there was still time, trusting that the mysterious force holding her back would vanish as quickly and completely as it had appeared. 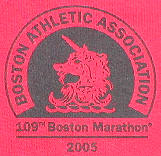 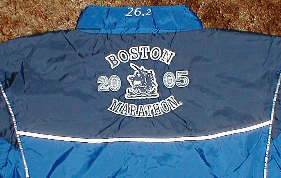 If ever a race epitomized the term “war of attrition”, this year’s Boston Marathon was it. A large pack of 20 or more runners bolted from the starting line in Hopkinton as the clock struck high noon; all of the expected contenders – including the most favored Americans, Alan Culpepper and Ryan Shay – placed themselves among that group; and all settled in for the long hard drive along 26.2 miles of Massachusetts blacktop.

Conventional wisdom dictates that to remain within this cocoon is the most effective tactic for those with hopes of winning. Inevitably, though, there are those who elect to take their chances and try to claim the victory from the front. This year, Stephen Kiagora and Khalid El Boumlili were the men opting for the less prudent strategy. The former, fourth here last year, bolted to the forefront with just three miles gone, a move covered quickly by Boumlili. These two hammered through the early miles side by side – five in 25:12, 10 in 50:18, half way in 1:06:11 – stretching their lead on the chasing group to as much as 31 seconds. That margin flattered to deceive, however, a fact of which defending champion, Timothy Cherigat, and the host of those keeping a close eye on him were keenly aware.

The proof of the leaders’ folly came in the early part of the second half. Shortly before the 15 mile mark (1:15:53), the pack wiped the leaders’ advantage from the books. Kiagora and Boumlili were swallowed whole and, with the beginning of the Newton Hills little more than a mile down the road, it was evident that the real racing was only about to begin. That was hardly a surprise. The Newton Hills, one of which is named “Heartbreak”,are renowned for good reason; countless are the races in which they have proved the decisive factor in the outcome. It may have been predictable that such would be the case again this year; but that is not to say that the closing 10 miles were anything other than thrilling.

Cherigat, Kiagora, Hailu Negussie, Robert Cheruiyot, Wilson Onsare and Benson Cherono were the contenders though the first of the inclines. Culpepper, notably, had begun to lose ground, dropping as much as 50 or more meters from the forefront. Approaching the top of the hills, Cheruiyot, the 2003 winner, appeared to be weakening as Negussie, Cherigat, Cherono and Onsare raced comfortably on cruise control. 20 miles were passed in 1:40:40, and that, it seemed, was tipping point. Shortly thereafter, Negussie injected a surge of such strength that it was as if he intended to sprint all the way to the finish line. Just as remarkable, the seemingly vulnerable Cheruiyot had re-gained the steps he had lost on his peers and was the only one to offer a response. At first, it appeared that so violent an injection of pace could only have been Negussie’s own death warrant. Adding to that was the fact that the odds were determinedly not in his favor; Kenyans had won 13 of the previous 14 Boston Marathons, and an Ethiopian had not won here since 1989, when Abebe Mekonnen accomplished the feat.

The pace and the odds, clearly, meant little to the 25 year-old Negussie. He hammered onward, dismissing Cheruiyot, who ultimately placed fifth, and dashing the hopes of the knot of world class competitors who were struggling in his wake. The closing miles he ran as a time trial. He may have felt the effects of the heat, the hills, the pace and the competition, but winning is a remarkable balm and, as he crossed the finish line, Negussie could take pleasure in having written his name in the record books and in having claimed a victor’s prize of $100,000.

Of the eight marathons he has completed, Negussie has now won four. A notable DNF came in the Athens Olympic Games. His PB of 2:08:16 came in the Hofu Marathon in 2002. There is no question about which is his biggest win.

The battle for the second position, and its accompanying $40,000 in prize money, went to Wilson Onsare, with Benson Cherono taking third and $22,500.

Boston 2005 may be seen as somewhat of a renaissance for American men. Alan Culpepper, on whom enormous expectation had been placed prior to the race, fulfilled all hopes with a fourth place finish that earned him $18,000. “The last four miles, I wouldn’t have been able to make it without the support of the crowds,” he commented. “This is right up there with the Olympics [In which he placed 12 th]. I think this is the beginning of a very positive direction for US distance running.”

Evidently, he’s right about that. The unheralded Peter Gilmore came through powerfully in the closing miles to place 10 th in a time of 2:17:32, while Ryan Shay held on for 11 th position and a 2:18:17 clocking. For the record, the last time that an American placed as high as fourth in Boston was 1987 when Dave Gordon accomplished that feat. The last time two Americans placed in the top 10 was 1993 when Mark Plaatjes placed 6th and Keith Brantly placed 9th. This may not be a return to the glory days when US runners dominated the foremost positions, but it is a clear illustration of American marathoners competing with, and defeating, some of the finest runners in the world.

The Boston Marathon is fabled and hallowed and venerable and all of those adjectives that speak of an event that is historical and special. Each passing year is another chapter in that long and illustrious history; and, because of Hailu Negussie, and because of Alan Culpepper and because of all those athletes who came behind them, this year’s race will be remembered as one of the really special ones, even though they all are.

BOSTON (Reuters) – Hailu Negussie of Ethiopia ended Kenyan men’s dominance of the Boston marathon on Monday by becoming the second Ethiopian winner in the history of the world’s oldest annually contested marathon. In the women’s race, defending champion Catherine Ndereba of Kenya became the first four-time winner of the marathon, coming from behind to overtake Ethiopia’s Elfenesh Alemu.

Negussie, fifth last year, finished the 109th edition of the Boston marathon in an official time of 2 hours 11 minutes 45 seconds. The course record of 2:07:15 was set by Cosmas Ndeti of Kenya in 1994.

Wilson Onsare of Kenya finished second on 2:12:21 and fellow Kenyan Benson Cherono came in third at 2:12:48. Kenyan men had won 13 of the previous 14 Boston marathons and runners from Kenya claimed five of the top seven spots this year. Negussie, who became the first Ethiopian winner since Abebe Mekonnen in 1989, put distance between himself and a pack of Kenyan runners, including champion Timothy Cherigat, after Heartbreak Hill, the steepest climb of the course.

The 25-year-old said he broke from the pack because he was concerned one of Kenyan runners might speed ahead like last year. “I made the move because I knew there were a lot of Kenyans. My second move made a difference for me to win the marathon,” Negussie said through a translator at a news conference.

Ndereba and Alemu also finished first and second in last year’s race. Alemu, who was more than one minute ahead of Ndereba at the halfway point, finished with a time of 2:27:03. Bruna Genovese of Italy came in third at 2:29:51.

Ndereba said she fell behind early because her legs felt heavy but as the race continued she felt more relaxed.
“As I kept on pushing the pace, I could feel my body moving and I thought. ‘Wow, I can do it,”‘ Ndereba said. The runners said the heat played a factor in keeping times slow, even though it was much cooler than last year.