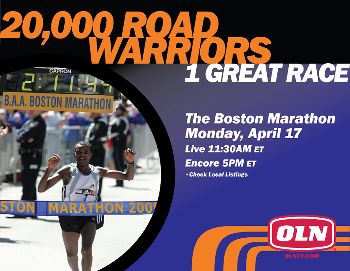 Marathon Man realized he couldn’t achieve a negative split on this course, so he planned for a 5 minute cushion by the half. The strategy paid off and he had energy to maintain a solid pace through the Newton Hills.

Everything came together for an awesome race. The Wellesley girls were loud, winds died down and crowds cheered! Ray knew this could be something special when he still had legs after cresting Heartbreak Hill. He maintained speed, growing more and more optimistic about hitting his 3:30 goal.

Wake up. Vitamins. Chips and Bibs! No shower. No shave.
Team Delaware boarded our Gregg’s bus at 730am. Ken and Bud were questionable due to upset stomachs, but everyone else looked forward to cool conditions (mid-50’s), while hoping for no wind. We arrived at our reserved parking spot at the Exxon station across from the final set of corrals. With a 2-wave start, the first 10,000 runners would start at the traditional noon time and the remainder would use the same corrals. Wave 2 would start at 12:30. 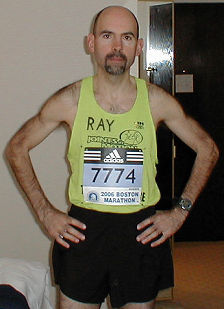 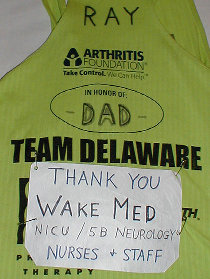 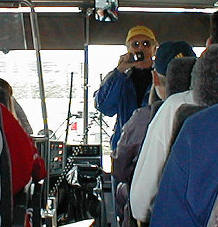 I walked the .7 miles to the crowded athletes’ village to grab a bagel, Gatorade (like I really needed more of that), and a couple Power Bars. Potty stops on the way up and on the way back! By the time I returned to the bus, I was pretty cold, due to dark clouds and blustery winds. But when the sun came out from behind the clouds, it warmed up quickly. Weather conditions became the major topic of conversation on and around the bus, as we tried to decide what to wear for the race. At least it took our minds off of the Newton Hills!

Another couple trips across the street to the Porta-Potty filled parking lot helped me finalize plans to wear my singlet and gloves. This turned out to be the right decision, as some people were warm in long sleeve shirts. As the time clicked closer to 11:30, I sat in the bus chewing a Power Bar (Cookies & Cream), sipping Gatorade, taking one Advil, and downing a 2 ounce bottle of “5-hour Energy” (8333% vitamin B12, 2000% vitamin B6).
Speaking of vitamins…

Final gear check (2 Power Gels and plenty of tissues in my Race Ready shorts), final photos, and of course, that final trip to the potty! I arrived in my corral at 11:45, wearing lucky bib #7774. Maybe that was just the edge I needed. My legs weren’t sore, so I felt the quiet confidence of a Boston Marathon veteran- – -that’s what I told myself, anyway. The National Anthem was pretty funny, with the singer and the mighty Hopkinton HS band totally out of sync with each other. But a fly-by of 2 fighter jets re-instilled our feeling of pride. Would an American man finally win this race again after more than 20 years? 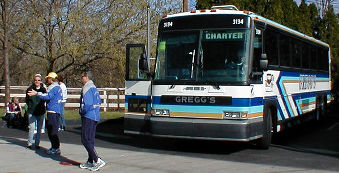 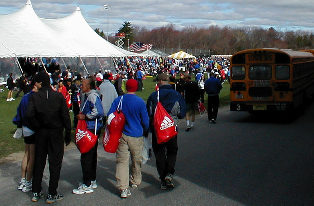 Everyone knows that the key to Boston is to not go out too quickly on the initial several miles of downhill. My pace was controlled as I tried to keep it under 8:00 per mile, but not too far under. It was cool, but the wind from morning had died down and the remaining cloud cover shielded us from the midday sun. I did the usual high-fiving of kids and either a wave or a not do acknowledge the many men, women and children who called out my name. If you ask me, wearing your name on your shirt is worth at least a few minutes of your final time from the constant support from the crowd. 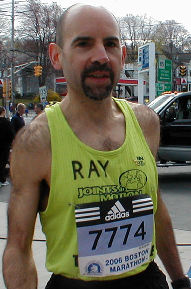 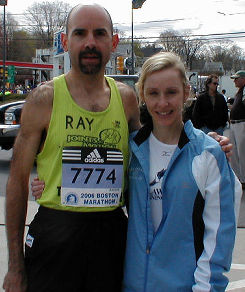 Ray and Amy wait for the start at the Exxon station

By the halfway split, I was pleased to be right on target (1:37:38 chip time) and feeling good. From that point on, things actually went better than expected, starting with the Wellesley girls actually sounding louder than last year. After getting a whole lotta love there (slapping about 200 hands), I braced myself for the Newton Hills.

Taking a Power Gel at mile 14 was a good idea, and getting a few gulps of Gatorade at each station helped my legs feel strong through the hills. By the time I crested Heartbreak, I was optimistic about shooting for 3:30, my goal for the past year. It only took 100 yards of downhill near mile 21 that I started to smile. I still had legs! In 2005, this was the point where I found my legs to be stiff, preventing me from maintaining proper form. That was labor, but this was running!

But lots of bad things can happen in the last 10K, so I just tried to keep my strides as relaxed as possible, monitoring every little twitch of my calves and quads. I also paid more attention to the sights and sounds along the course. It was actually enjoyable and when I realized that I only had to do my final 3 miles in 30 minutes, I was pumped! The Citgo sign was my friend. One mile to go and barring catastrophe, my sub-3:30 was in the bag. A few more high fives [cause now I was feelin’ it!], but for the most part, I stayed out of harm’s way near the center of the street, picking off more runners than passing me.

Down and up the new little tunnel, a turn to the right and a turn to the left onto Boylston. My stride picked up on that final 800 meters and I proudly crossed the finish in 3:22:04,
blasting my time from last year by 15 minutes and coming within 2 minutes of my marathon PR. 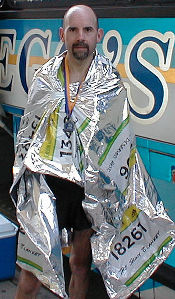 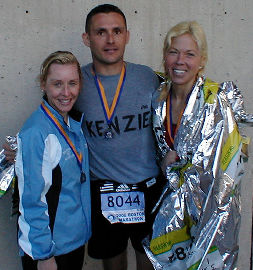 Marathon Man after his superb performance || Amy, Joe, & Theresa, after their own great runs

The walk back to the bus was even more enjoyable than last year. [Probably a 25 minute/mile pace] Yogurt drink, chips, banana, water, energy bar, and finally a beer from the bus cooler. Yeah! Congratulate and be congratulated. Stretch, walk, sit. It had been warm and sunny at the finish, but the bus seemed to be parked in the coolest, windiest spot in town. It was a long wait, as some of our group had hit various medical tents, but just about everyone finished. Doug was the last one to the bus, after enjoying an IV to perk himself up a bit. 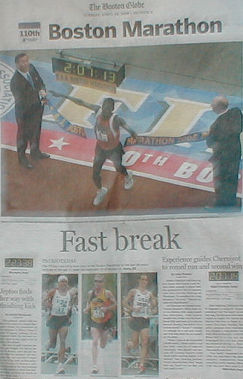 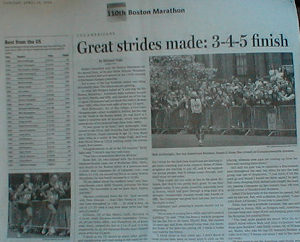 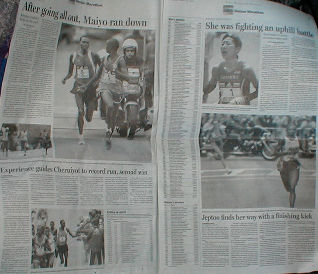 The Boston Globe recaps the race in their Marathon section

Back to the Crowne Plaza by 6:30pm to shower off all of that sticky Gatorade and then 10 of us hit Pizzeria Uno, where I enjoyed a steak dinner. Our trip back the next day was of course highlighted by a lunch stop, where I dined on a nice omelet. 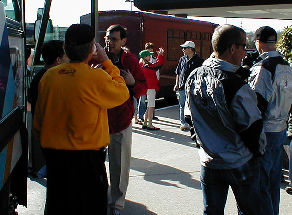 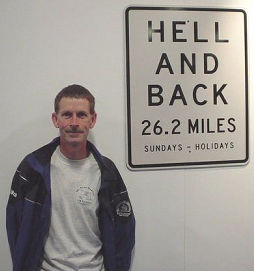 I knew that I’d want to grab a Wilmington News Journal on the way home from the airport, but I was totally shocked to see myself front-and-center in an AP photo on the front page of the Sports section! 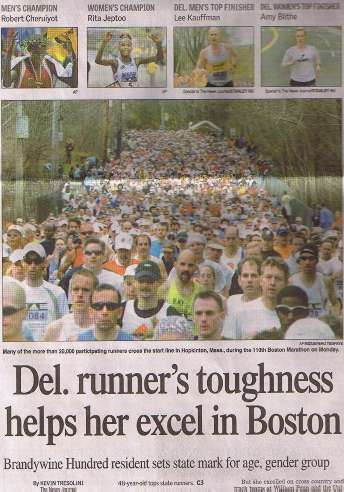 Ray is famous in Wilmington, and all over the world.

Thank-you Wake Med NICU/5B (neurology) nurses and staff
I always run in honor of my parents. This race was also dedicated to the wonderful team of people who cared for my father earlier in the year when he was hospitalized. On Ash Wednesday, in Raleigh, NC, he had to be rushed to the Emergency Room for what was later found to be a malignant brain tumor.

Doctors and nurses did every imaginable test and eventually removed the tumor surgically. Dad spent time in ICU and various other parts of Wake Med over a 10 day period, receiving exceptional treatment by the health professionals there.