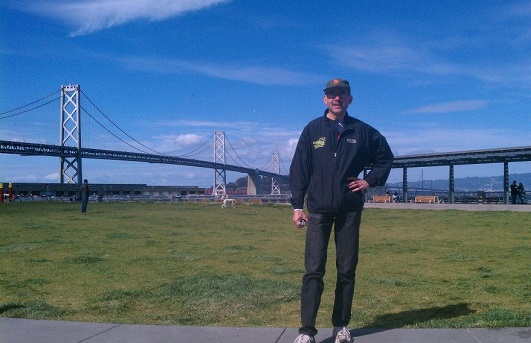 San Francisco side of the Bay Bridge – photo by Bart

Having lived in the Bay Area for 12 years in the ’80s, I visit friends each time I return. Bart & Veronica live close to San Jose Airport in Santa Clara and I hit them at both ends of my trip.

But first, a surprise visit with a running buddy previously from Wilmington, but now living in Seattle. I was grabbing my luggage when I someone called my name. Turning around, Scott “Shaggy” Hodukavich greeted me with a big smile. He happened to also have just landed, enroute to run Big Sur Marathon 2 days later!

I was extra surprised to see Shaggy, since I had just received a call from Bart to check my progress. He had flown in on SouthWest, just like me, so we ended up in the same place. What a coincidence that 2 friends should both fly in at the same time to each run a different marathon!

We walked to the car rental building and hooked back up after securing our vehicles from different floors. Mine had Colorado plates. Dropped off my stuff at Bart’s and drove down Stevens Creek Blvd to meet Shaggy at a restaurant owned by friends of Bart and Veronica. We had pasta and “Damn Good Beer”, then walked across the busy street to Santana Row, an upscale outdoor shopping mall. Visited a Tesla showroom, & saw plenty of Beverly Hills type shops amidst the palm trees.

That evening with B&V, conversation turned to politics & big pharma. The 3 cats did not join in the discussion.

Saturday in the City
7am exercise and a neighborhood run, with plenty of flowers and vegetation to enjoy. Also some stark contrasts of expensive sports cars on the same street as abandoned/forclosed homes. Bart & I drive 30+ miles north to the city, where we park almost 2 miles from ATT Park and start snapping photos
immediately. We buy $24 “standing” tickets, but walk right down to the dugout in the empty stadium and eventually found a pocket of $50 seats that we make our own for most of the game (in an otherwise full stadium). The Giants make a 4 run comeback for the win as we tour the stadium.

San Francisco Walk
After the game, we walked with much of the crowd to the waterfront and Ferry Building, which now houses shops & tourist area. We had tired legs by the time we doubled back to the car. Pleasand drive back south to pick up Veronica to hit 456 Chinese Restaurant. I had time for a little website work before turning in.

Sunday Church & Gardens
After checking my emails, we attended 10am Mass at St. Martin of Tours, including donuts afterwards. B&V invited me to join friends to carpool around for a “Native Plants Garden Tour”. We dropped by a condo complex, private residences, community gardens plus ducks and a chicken house on a warm, sunny day. San Jose has few zoning laws. Falafel Drive-in was delicious and we wrapped up the day by sipping wine in Ken’s backyard, which includes gorgeous plants and a “wedding chapel” area of hedges.

Guadalupe River Trail
Up at 6:30 to stretch & warm up. Drove on Pruneridge to San Jose where I enjoyed a 10 mile run along the tiny “river”. It’s a typical urban greenway, which runs from almost downtown, past the airport to a pretty stretch where I found several people commuting to work by bike.

Shower back at the house, where exterior painter taped the door closed. 11am-4pm was my drive up I-80 to Grass Valley in the foothills of the Sierra. Warm sun, traffic on 880 in the East Bay. Stopped on Vallejo bridge, then luch at Jack in the Box and I needed to ask an attendant how to pump gas.

Dropped in to Auburn CVS for supplies, including Gel insoles. When unpacking Friday night, I had realized that instead of bringing my new marathon shoes, I had accidentally grabbed a pair of old, retired running shoes instead. Decided to go with them, rather than buying new shoes. Called Scott & then Craig (since using my cell is still a novelty for me) & got final directions to Tammy Way.

Real Estate & Politics
Craig has a great house in the beautiful mountains near Grass Valley. Conversation while being attacked by a couple of their 5 little dogs. We then visited a property that he was considering bidding on by auction for a real estate client. Hit a food store & Craig cooks chicken with rice & boccoli.
NHL playoff game 6 on TV: Kings 4, Sharks 1. Bed at 10pm!

Tuesday Running & Sightseeing
A little web design business to start the day with a couple business calls. Then a quite hilly 5 mile run around the Alta Sierra community. Craig & I head to historic Nevada City for a walk, real estate auction on the courthouse steps, and some delicious Pete’s Pizza. A few miles down the road and we sightsee some more in Grass Valley, where it’s 80 degrees and sunny. Culture Shock Yogurt hits the spot before we visit another property on Hidden Valley Drive. 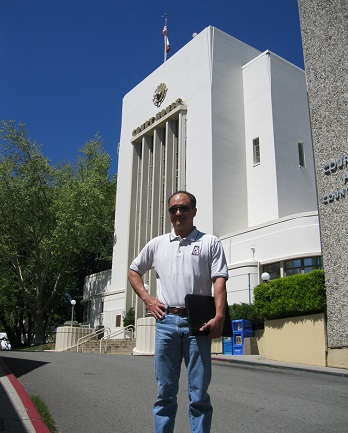 NHL & NBA Playoffs
That evening is spent with the 5 little dogs, watching the Flyers beat the Rangers and then the Clippers/Warriors game (amidst the owner’s racism scandal). What fun!

Wednesday: IHOP, WordPress & Hockey
Awesome traditional IHOP breakfast (every time I visit) as usual included eggs, sausage, hash browns, & French toast with strawberries. Then back to the house where I did a full day “in the office”, mainly working on re-design of my school of hair design client’s site. but 4pm was time to watch a thrilling game 7 Rangers OT win 2-1 over the Flyers at MSG. We then headed to an Italian restaurant for an expensive meal with Craig’s friend and family. Pretty small portion of ravioli, but the beer was good! Then we watched another NHL game 7 as the LA Kings beat our San Jose Sharks.

Thursday: Old Sacramento & Capitol Park
Craig & I convoyed through Auburn to Sacto, where he was attending a business meeting. It was a hot day for me to stroll around Old Sacramento taking photos while enjoying the River Walk, shops, saloons and a $5 footlong Subway lunch. Then I drove 2 miles to find a good parking spot to spend 2 hours visiting every monument in the beautiful park surrounding the state capitol building. Redwood & Cedar trees, monuments to wars, Vietnam, Civil War, Firefighters. Many photos & video clips and people enjoying summer weather on the grass or on benches.
SEE VIDEO BELOW!

Haircut & Another Park
Still no contact with Wendy, so I found a tiny Men’s/Women’s salon with an $8 haircut sign in the window. The hot Chinese stylists made it an even better deal! Spent 4-5pm at Land Park near my destination for the evening. Finally got to Perkins Street in time to get licked by 2 Beagles. Of the 2 cats that also lived there, one would share my bed that night.

With Chris only flying in later from L.A., Wendy and I hit a cool neighborhood restaurant for Hefeweizen, sausage sampler, cheese tray. We discussed dating and a recent photo scandal.

Friday: Running, Burrito, More Hockey!!!
730am 5 mile run around the big neighborhood park, then a continental breakfast followed by a little work in the office. Had a nice burrito lunch with Chris before getting on the road back to Santa Clara. Took I-5 through the valley to Livermore, and then the scenic route into heavy Friday afternoon Silicon Valley traffic, especially on Lawrence Expressway. Enjoyed a 3-2 Rangers OT win over the Penguins, then a pizza dinner and some TV shows.

Saturday 300 Mile Road Trip
Time for the grand finale of this vacation, a trip within a trip…

Back to:
Avenue of the Giants Marathon Recap 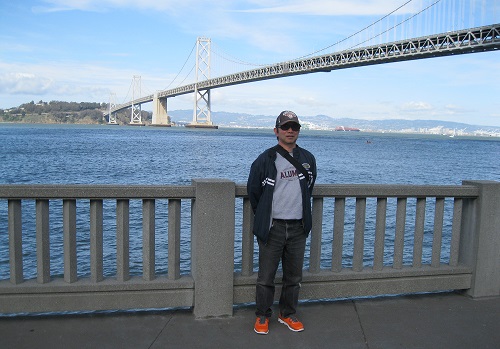 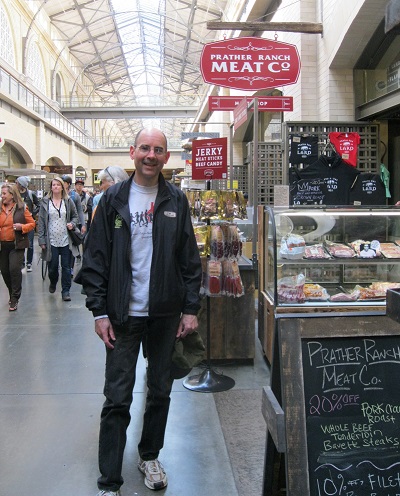 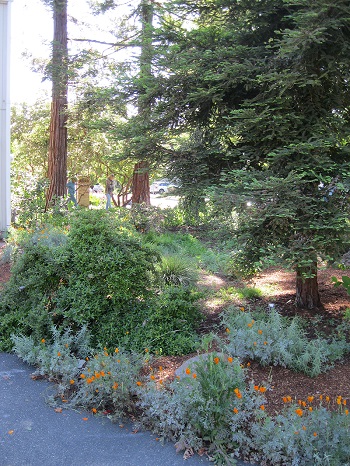 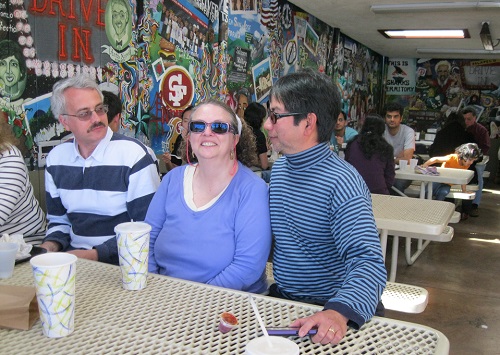 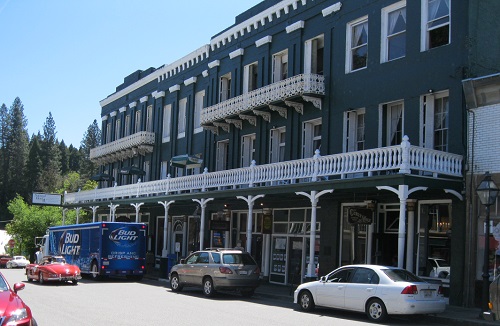 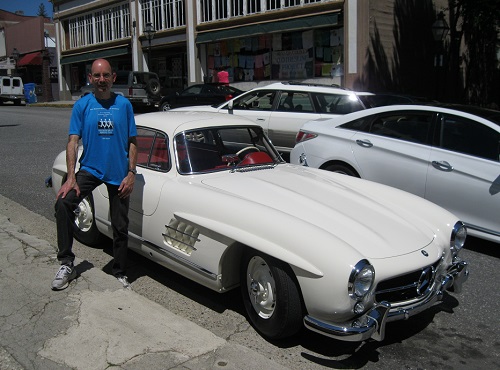 Not my rental car 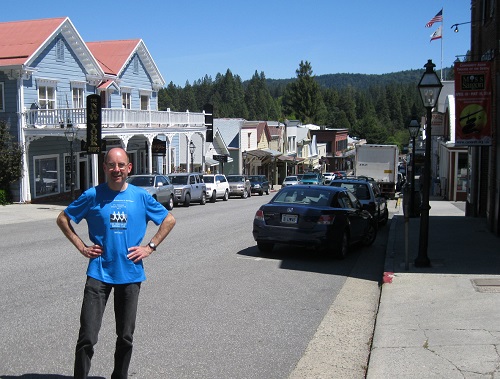 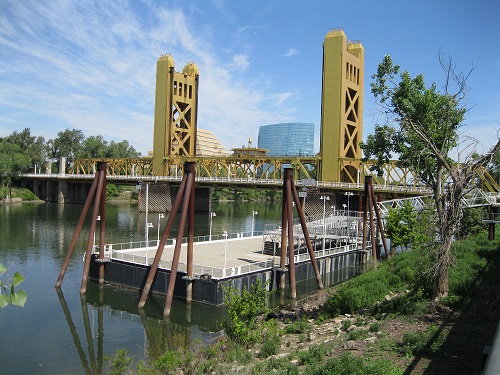 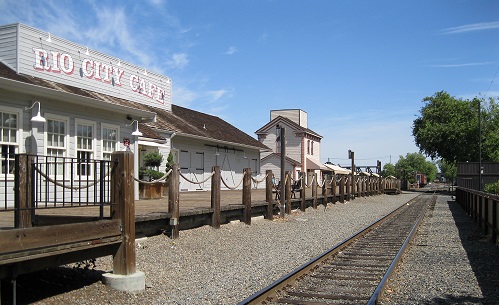 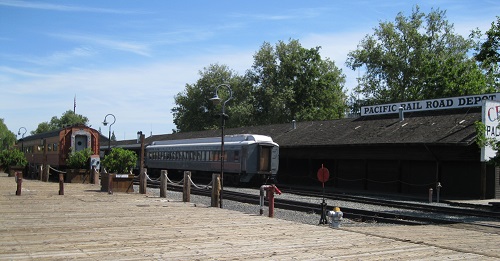 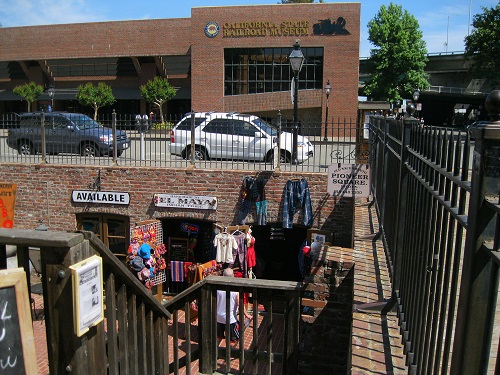 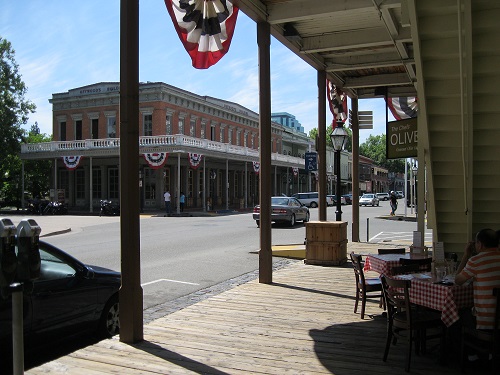 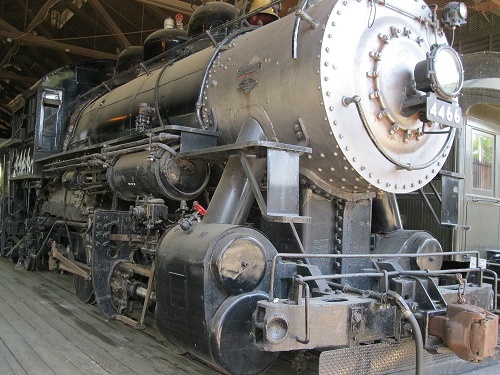 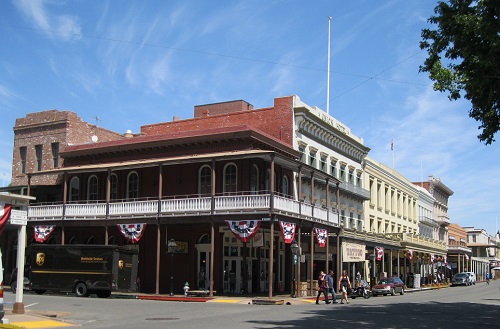 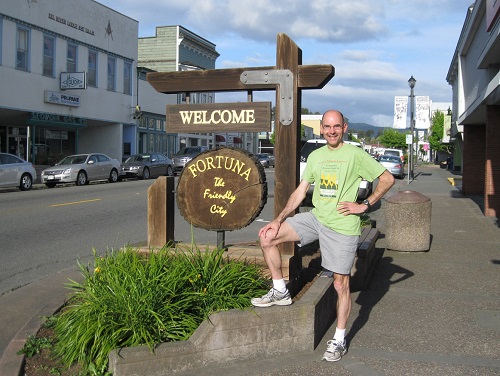 Back to:
Avenue of the Giants Marathon Recap