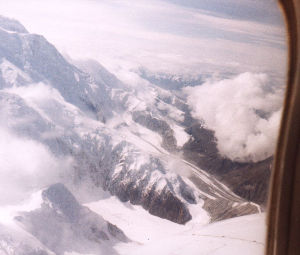 The day after the marathon saw me high as the clouds…literally.

It was time to get out of Anchorage and head for the mountains of the Alaska Range, about 2 hours north of the city.

More photos coming soon, along with insight from my teammates about their own adventures. While 5 of us headed toward Denali, others went sled dog mushing or stayed in town shopping…

Expedition to Talkeetna . . . Flightseeing over Denali

Monday 8/18/03 – Road Trip to the Mountains
I had taken the initiative to rent a car and then easily recruited Jim, Ledelle (aka Donelle, Rondell, etc,), Alli and Joanne to drive north with me towards the Alaska Range. We were picked up by the Hertz shuttle at 7:45 and were on the road in our Dodge Intrepid by 8:15. At $20 each, including gas, we were quite happy. It was great just getting out of Anchorage. After about 40 miles of highway, we had a well-paved two lane road virtually to ourselves. 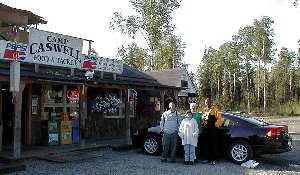 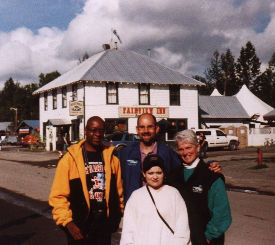 First stop was a drink and snack at “Camp Caswell”, an out-back tourist store/laundry/outhouse in a bizarre 4 story house that the owner had built with decks on every level. He told us that on a clear day, we’d be able to see Mt. McKinley after just a couple turns in the road. Apparently it wasn’t a clear day and the summit never became visible from the ground. At around 10:30, we turned off for the 14 mile side-road to the town of Talkeetna, the Doorway to Denali.

From the Southcentral Alaska Activities Guide:
Talkeetna began at the turn of the century as a supply station for miners and trappers. This pioneer town has maintained its rustic spirit. Historic buildings line the one-block main street and many locals still live in log cabins. Miners and trappers who live in the bush without running water or electricity come into the village for supplies and messages. Talkeetna is the nearest town to Denali and is the staging area for many climbing expeditions. 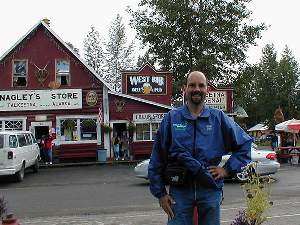 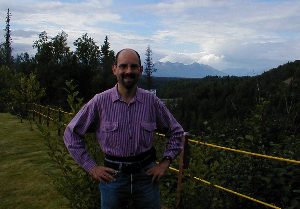 My companions planned to take a train ride we had heard about. It goes into the mountains where you can see the real Alaskans and enjoy the scenery. I opted to go “flightseeing”, since one doesn’t get to Alaska every day and I was determined to see “the mountain”. They headed for the train station and I drove half a mile to the airport, home to about 6 different flightseeing companies. $200 for 2 hours wasn’t cheap, but it was a thrilling experience. For slightly less, I could have taken a single engine plane and circled Mt. McKinley (aka Denali). But by paying more, I got on a twin engine plane that goes all the way up to the summit. Timing was perfect and I was on the plane with the five other passengers in no time. It’s the smallest plane I’ve been aboard and we were instructed in the use of the headphones and air mask, since the unpressurized plane climbs to Denali’s 20,320 foot summit! For those keeping score, that’s pretty darn high. We first crossed the flatlands for 25 minutes as our altitude increased. 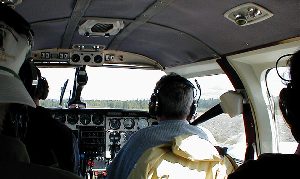 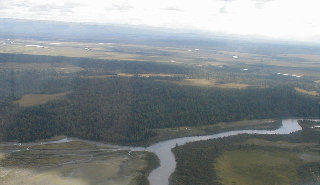 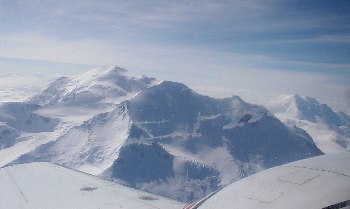 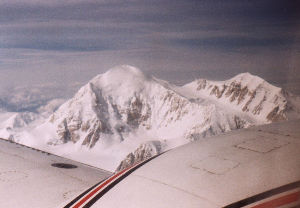 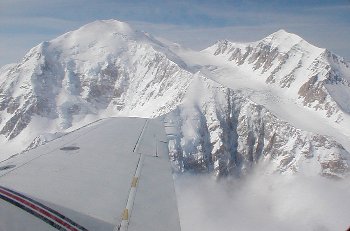 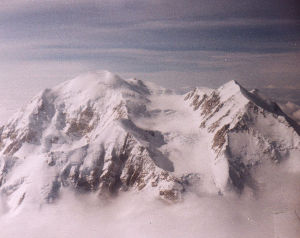 Once above the layer of clouds, it was just us and the mountain, in all it’s splendor! We circled a few times as I snapped photos with both my digital camera and increasingly antique Kodak 110 camera. This was the one hour of the trip that I could have used some sunglasses as the sunlight reflected off the snow-capped top third of the mountain. The view was awesome and luckily there were enough breaks in the clouds to look at the Denali’s peak on my right, and then look down to the valley floor way below on my left to try to attain some perspective. Wow! 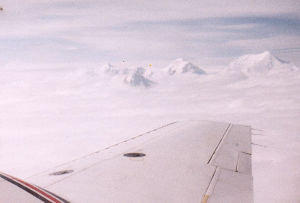 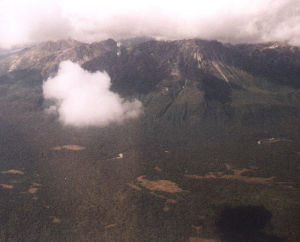 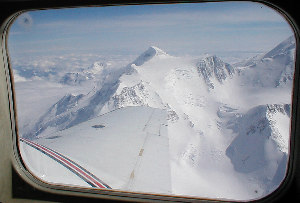 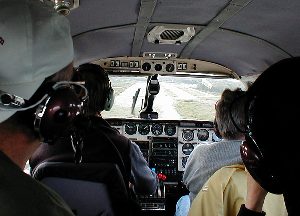 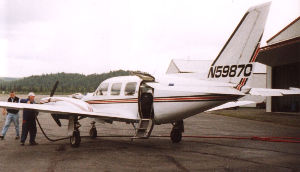 Out of the stratosphere and back to reality. A rain shower was falling as I disembarked the plane and drove back to the main street where I found my companions. There was no train on Mondays, so they had been busy walking around and buying souvenirs. Ledelle shared his sandwich with me as we sat in the car and plotted our next move. Someone in town had recommended a pretty location for some photos a few miles down the road at a certain milemarker.

Unfortunately, there were no milemarkers present due to construction and we just happened to stumble upon the road. It had a gravel surface, so we slowly rolled along, ever vigilant for a moose or other photo op. Santa Claus, driving a Land Rover, passed by in the opposite direction. We passed a couple walking somewhere with plastic gasoline tanks. Then we caught up to a bulldozer which appeared to be in the process of building our road. A few minutes later, we were approached by a wolf. Upon further inspection, it turned out to be a dog named Bo. Bo was quite friendly and jumped into the car when we opened the door. That was enough adventure for one road, so we headed back to the highway.

Within minutes, we stopped at a bizarre tourist store which featured two reindeer in a tiny pen, a bunch of old Alaska license plates, a couple severed hands, plenty of antlers, and a multitude of other oddities. No moose. The mountains of the Alaska Range were coming into view and we stopped for photos at the Princess Cruise Lines resort. Another 20 miles up the road and we made a stop at a rest area which included Alaska’s war veterans’ memorial. Time to turn around and decide which establishment to dine at, since it was now about 7pm. We made the right choice and enjoyed our “lunch but not dinner” at H&H Restaurant, where I had a reindeer sausage sandwich with fries. It was a relaxing log building overlooking a quiet lake. After that, our only stop was for gas, before arriving back at the Sheraton as dusk settled in at 10pm.

Tuesday 8/19/03 – Finally a Moose!
I got up at 7am to return the rental car, depositing 6 teammates at a downtown eatery on the way. After shuttling back, 14 of us took three taxis across town to the Alaska Zoo at $20 per cab. The zoo wasn’t very impressive, but we did get to finally see a [fenced in] moose! It was quiet and tranquil, so there was little complaining. We met up again at the hotel, checked out, and ventured downtown for lunch. 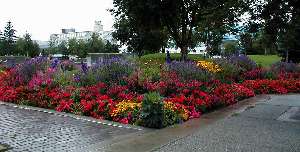 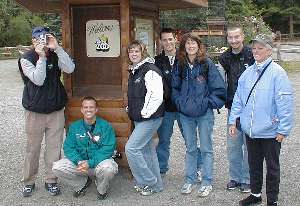 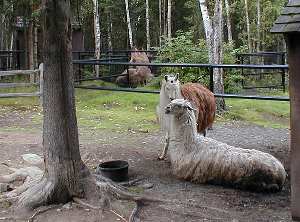 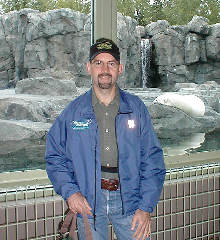 With a couple more hours to kill before our 8:50pm flight, some of us did the last minute shopping, while the rest stopped for a beer. After all, I still needed an Alaskan beer bottle since the maid had taken the one I had previously garnered. It was only after we ordered at one place that I learned they only had local beers on tap. This made a good excuse for grabbing an additional brew back at the Sheraton as we gathered for the last few moments of our visit. 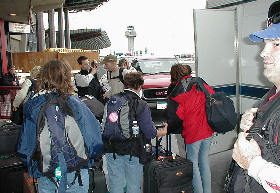 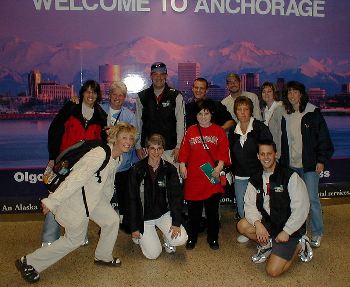 Anchorage Airport was busy, but the security line moved quickly. Enough time for a final group photo! Then we almost lost one of our members who was bringing an Ulu Knife (for filleting fish) aboard in a carry-on. After checking it in, she had to head back through the line for another shot at the metal detector. Our flights (through Chicago) were fairly comfortable. I was beat! Plenty of rest and of course, plenty of hydration. I was still limping, but intending to rest my legs as much as possible for the next two weeks.

Our redeye flight brought us to Philadelphia on time at 10am. In no time, I said my goodbye’s, collected my luggage, and returned to the steamy summer weather to await parking lot shuttle bus. I’d have just enough time to unpack, download my camera to get a few pics online, and take a 3 hour nap before heading to work that night to ship out jewelry from Sunday’s “Klondike Gold” event on QVC. Of course, before I left, I made sure that I stuck my “Moose, next 15 miles” magnet on the refrigerator.
Those Alaskans sure have a sense of humor!