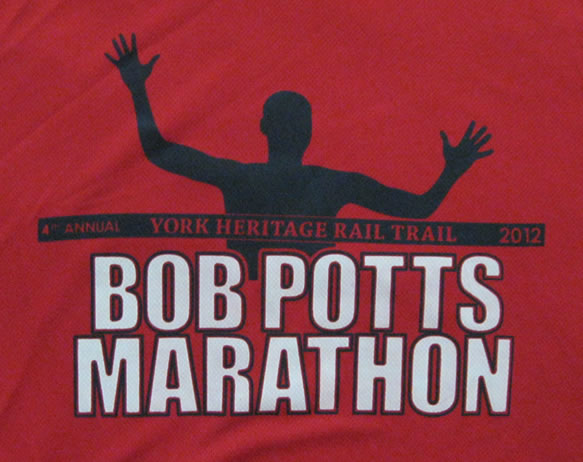 Out and Back in York, PA

My 21st marathon was my 3rd in a row in southeastern Pennsylvania. I was happy with a low-key event since it would be the least trained I’d ever been for a 26.2 mile race. With under 450 finishers and few spectators along the out and back course, it was great to get to see runners coming in the opposite direction during a significant portion of the run.

Marathon Choices – Late Decision
Since Philly Marathon had been in late November, I didn’t start planning what to run in Spring until mid-winter. After checking with many runners, noone could fit Flying Pig (Cincinnatti) into their schedule, so I figured I’d do something low-key and nearby.

Back-to-back Halves
My March 18 Germantown Half Marathon in Memphis, TN was part of a long weekend that I was there for RRCA National Convention. It was sunny and a humid 70 degrees, as it had been on the group runs we did the 2 days before that race. The course and size of the event is similar to CR, with gentler hills so this half was my training run for the next half. A week later, I had a good run at Caesar Rodney Half Marathon (my 10th in a row!) in nice 50 degree & overcast conditions. My 1:39:54 was virtually same time as last year.

Running out of time
With a busy work & family schedule, I “ran out of time” to be able to fit my typical three 20-mile training runs in and would have to settle for just two. One was in the Catskill Mountains – my typical “run around Rondout Reservoir” with just me, deer, an eagle and passing cars. The other was a Panera run in Newark, doing one 5-mile loop before the out-and-back along White Clay Creek.

Sore Hamstring?
Only a couple times during my moderate training (rarely did over 40 miles/week) did I feel some tenderness in my Achilles. The only soreness that actually effected my running was a 2 week period that I worked through a sore left hammy. This was a surprise, since I’d never had hamstring issues and certainly hadn’t been pushing the pace very much. A couple comeplete rest days and a few more scaled back runs got me past that issue and I didn’t run hard enough to allow any further complications.

Road Trip to York
Each Wednesday I run 5 miles with a fellow Pike Creek Valley Running Club member, Dave McCorquodale. He decided to do Bob Potts for his first ever back to back marathons, following Delaware Marathon which I was a course marshal for. We drove up on Saturday afternoon just in time to pick up our bibs and grab a good meal at TGIF. Then it was time to relax by watching a Phillies game until lights out.

Race Morning
Thank God for a 6:30am start, since there was not a cloud in the sky and the sun was threatening to beat down on us at every opportunity. We arrived at the sports complex of York College at 6am, snapped a couple photos and hit the potty line. The race finishes on a track around their soccer field. The start was just a short walk down a little hill (which of course, we’d see again).

Under control in early miles
I didn’t have a real time goal but hoped for sub-3:30 and would start at a 7:30/mile pace only since it’s easy to figure in your head. The first mile was through town streets on the way to the trail. It was still cool enough (around 64 degrees) that the sun wasn’t a factor yet. Once on the crushed gravel trail, we were mostly in the shade except for opennings for road crossings and occasional farmland adjoining the railroad track. It’s a very pretty course and most straight stretches are not long enough to be depressing. There’s one very dark tunnel over an eighth of a mile long. I maintained my target pace for the first 6 miles and remained comfortable with the reasonably cool early temperature.

Just enough runners
With 425 finishers, there were enough runners that I didn’t lose contact by more than 20 yards until the last difficult miles of the race (but let’s not think about that yet). Before reaching the turnaround, I let a few different individuals or pairs of guys pace me. I started to drop a bit as early as mile 7, but made sure to continue to enjoy the scenery and groups of 10-20 spectators at crossroads every mile or so on the course – which was flat as a pancake. For a couple short portions, the gravel surface was not as powder fine and became annoying. Periodically there were cement bridges where you could really feel the difference in surface in your legs. 13.1 was slightly before the buttonhook turnaround and I was perfectly just under 1:40 (for a 3:20 marathon). But that meant that I’d lost a few minutes over the past 6 miles and I wasn’t exactly planning on speeding up.

Why did the chicken…?
There’s always comic relief somewhere along the way and mine came about 15 miles in. I was approaching one of those enthusiastic crowds of spectators with an attractive lady conveniently in front of me. Suddenly, a brown chicken darted in front of her from the side of the road and I could hear her softly scream while raising her arms. The equally frightened chicken ran with her for a stride or two and never did finish crossing the road. But just when I thought it was safe, the chicken spotted me and decided to run a few more strides alongside. I laughed out loud, which is a good way to relax a tense body.

No such thing as easy marathon!
Flat is usually preferred but once you get to mile 20 even a flat course can get tough. I was starting to get passed since I knew that I was consistently slowing while others were maintaining. At least that kept me from getting lonely. By now, the sun was a factor, so I stayed to the shady side of the path when possible. I did Power Gels at mile 10 and mile 18. At the last few water stops, I became thirsty again a half mile later. I was OK above the waist, but the legs weren’t cooperaing as well.
Only a couple pangs of soreness in calves or quads for a couple strides, but they were mainly just tired. I pleaded with them to continue, but the only promise they made was to get me to the finish line.

Hot final mile
It was comforting to watch milemarkers approach, but the last stretch was out of the shade and even though it was just after 10am, the sun was beating. You can hear the finish area announcer with almost a mile to go, since the course circles back to go up the little hill and onto the track for a half lap to the finish. I hadn’t looked at my watch since mile 8, so I had no idea of my time until I saw the 3:32:51 on the finish line clock. Didn’t care. Happy to stop running.

Soft, comfortable turf
Grabbed water, a pretzel & half a banana. Then I stretched and slowly walked around the nice, soft artificial turf of the soccer field, watching runners finish. Unsure when I’d see Dave hit the track, I paced back and forth under the warm sun. With a background of rock music, a nice crowd sat in the stands, cheering on the runners, who’d hit the finish every 15 seconds or so. By now it was over 70 degrees in the shade. Spouses and kids would congratulate family members immediately after they received their medals. Cute young ladies in bright pink shirts nonchalantly photographed runners in the final stretch or crossing the line.

Dave finishes
Dave successfully completed his 2nd marathon in 8 days in 4:54:13 and I barely gave him enough time to grab water until we headed to the car to get back to Days Inn for a quick shower before 12:30pm late checkout. After that, we enjoyed burgers at a Red Robin in Lancaster on the way back to Wilmington. 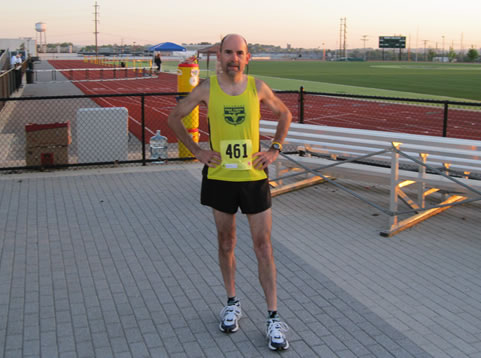 Ray before race at York College 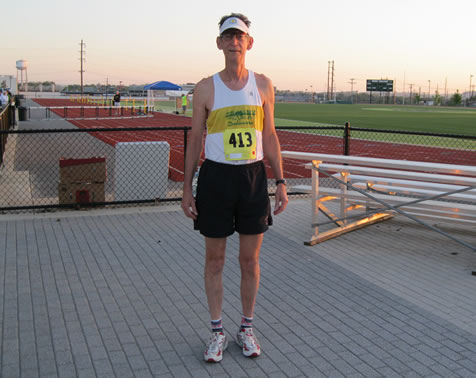 Dave at 6am before race 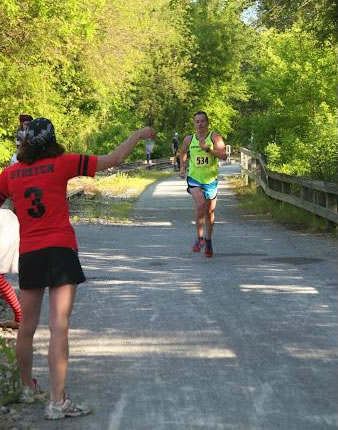 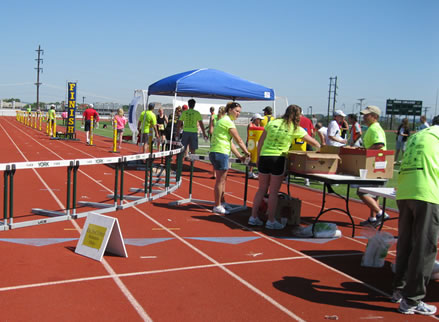 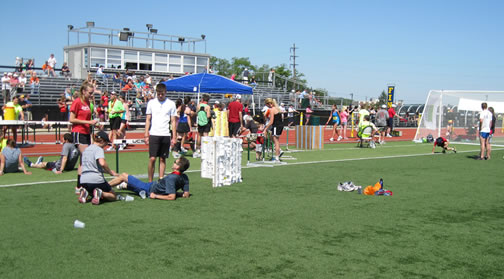 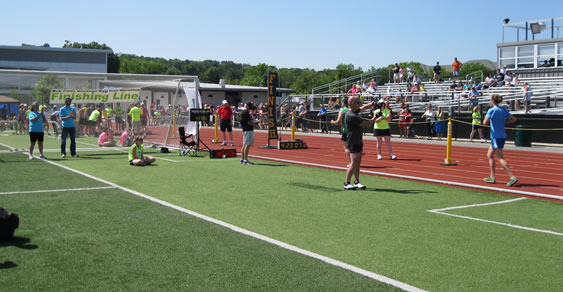 Sunny & warm on the infield 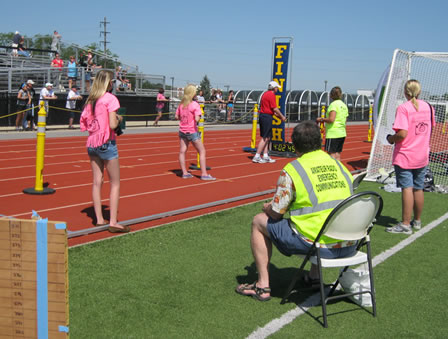 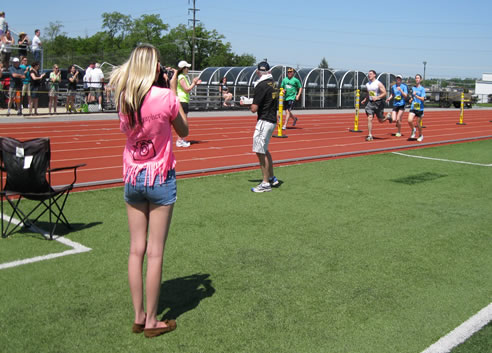 The finish line is a sweet site! 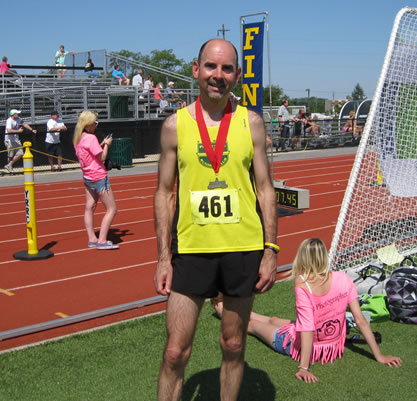 Ray after the race 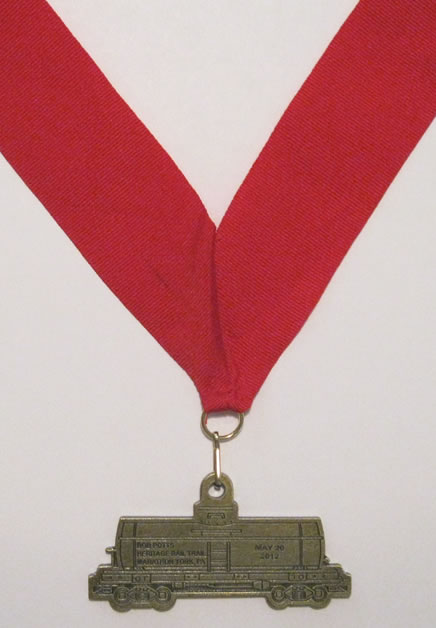 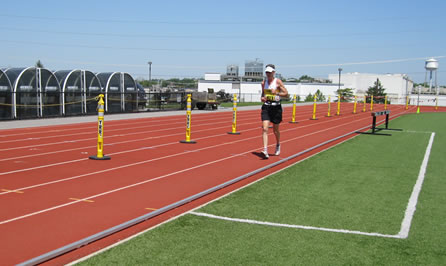 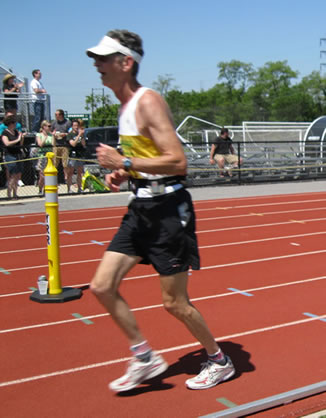