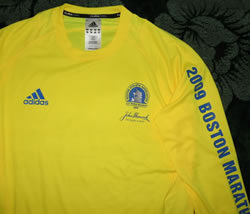 Exciting races for both men and women as Americans took 3rd place in each.

The 113th Boston Marathon had good conditions, with temperatures hovering in the 40’s under cloudy skies. 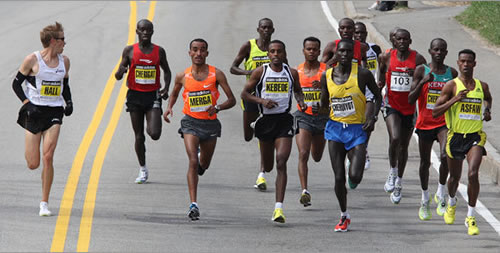 Kara Goucher was pondering the meaning of the fortune cookie she got at dinner: “Do not let great ambitions overshadow small successes.” Did that mean she shouldn’t hop on a plane for London and take on the rest of the world Sunday?

Only a few hours after Goucher finished a creditable, if frustrated, third in the 113th Boston Marathon, she was trying to persuade coach Alberto Salazar to let her knock heads with last summer’s Olympic medalists on five days’ rest in the London Marathon. No go, Salazar decreed, saying that her next 26-miler wouldn’t be until the fall of 2010.

Goucher’s eagerness to get back on the line was part of her coulda-shoulda postrace evaluation, after Kenya’s Salina Kosgei and Ethiopia’s Dire Tune both outkicked her in the final half-mile after the American had led from Heartbreak Hill until Kenmore Square.

“I should have pushed either sooner or later,” concluded Goucher, who was bidding to be the first US woman to win here since 1985. “I just got antsy. I wanted it so bad.”

What Goucher and countryman Ryan Hall learned the hard way in the Athens of America was a lesson that goes back to Pheidippides, the original marathoner who died at the finish, probably because he kicked too soon. “Tactics are just as important in the marathon as they are on the track,” Goucher said. “I hadn’t realized that before.”

Nor did Hall, who jumped in front right from the start and led the field for almost all of the first 9 miles before being unceremoniously dropped by a trio of Africans before the hills.

Disappointment aside, it still was an encouraging day for the home side, which hadn’t had a man and a woman both make the podium since 1985, the year before Boston began offering prize money.

“Two Americans in the top three is fantastic,” declared Goucher, who also finished third in her marathon debut in New York last year.

A decade ago, USA Track & Field would have been popping champagne corks over a couple of bronzes. But after making three distance podiums at the last two Olympics, the Yanks have developed great ambitions. Winning Boston is one. So is winning New York, where no US male has prevailed since Salazar in 1982 and no woman since Miki Gorman in 1977.

“The competition is brutal today,” says Bill Rodgers, who won both Boston and New York four times. “When I did it, it wasn’t so tough.”

When Rodgers won here, he beat two Americans, a Japanese, and an Italian. The sport belongs to the East Africans now. Last year, the Kenyans and Ethiopians had 16 of the world’s top 20 men, with nearly two dozen Kenyans breaking 2 hours 8 minutes. This year, 10 Kenyans already have managed that, with Duncan Kibet and James Kwambai both running 2:04:27 in Rotterdam this month.

“The bar continues to get raised,” says Hall, whose 2:06:17 in London last year ranked only ninth. “It’s time for Americans to step up. It’s going to keep getting faster and faster.”

For US marathoning, the challenge is not so much to get faster as to get deeper. While podium-level runners like Hall, Goucher, Deena Kastor, Shalane Flanagan, Meb Keflezighi, and Khalid Khannouchi can run with anybody on the planet, you still can fit most of the American contenders inside an airport courtesy van.

“We’re getting a lot closer, but what it takes is more training groups with more runners,” reckons Salazar. “Our numbers are minuscule compared to the East African camps. As small as those countries are, Kenya and Ethiopia have much larger pools of athletes to draw upon.”

Given the relative handful of top international racers in the States, the burden of performance in the big races is massive.

“I admire Ryan and Kara for carrying all that weight,” says Rodgers. “I didn’t have to do that. I snuck in. No one knew who I was.”

Everybody knew who Goucher was even before she’d run her first marathon, because she’d competed on the track in the Olympics.

“I was scared the whole race,” she acknowledged. “It’s a completely different sport. I was thinking, please let me make it.”

This time, Goucher was beating herself up because she let a victory slip away. Still, two podiums in two world majors in her first two races is remarkable for a woman who still is finding her way along 26.2 miles.

Small successes, though, make for great ambitions. Which is why Salazar was keeping an eye on Goucher yesterday, just to make sure she didn’t jump aboard a night flight to Heathrow. 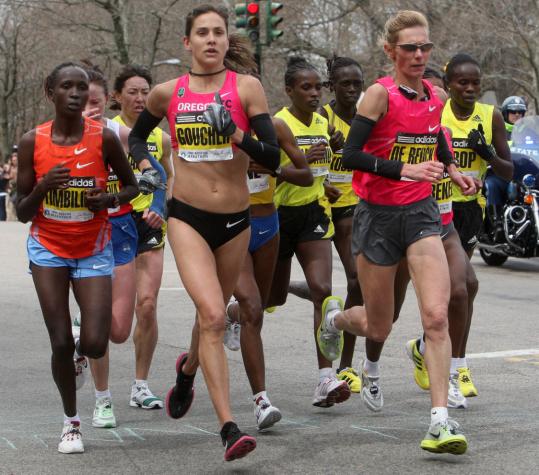 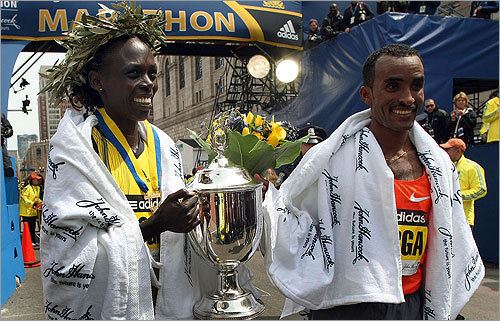 All photos by Boston Globe 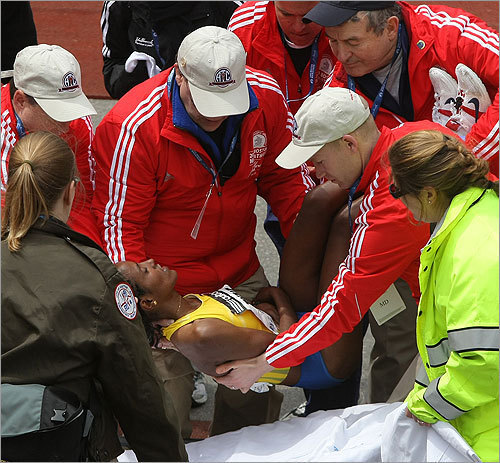 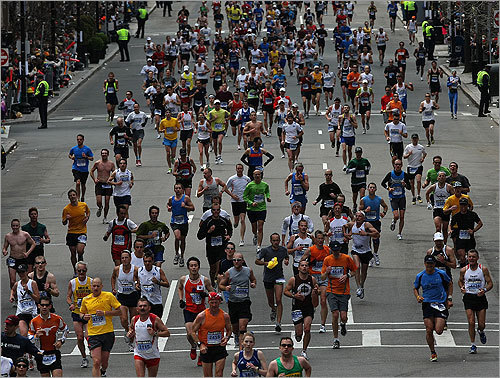 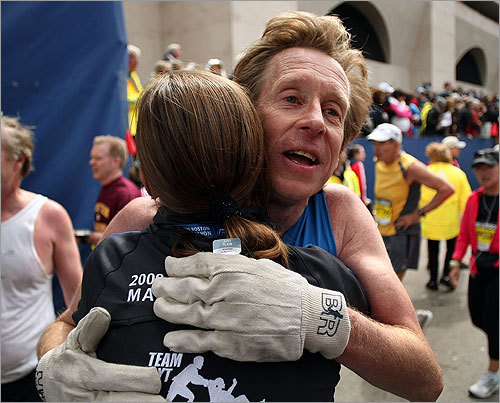