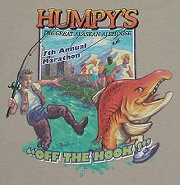 Help me raise money for Arthritis Foundation as I recover from running Humpy’s Classic Marathon in Anchorage, Alaska!

The race was August 17th, 2003 and I was once again part of Joints in Motion’s team.

Photos and an account of the trip are on this page and several others…
Also see notes from my teammates about their adventures in the majestic surroundings of Alaska.

Thursday 8/14/03 – Join the Team!
My bags were finally packed the night before our flight to the 49th state and I had just enough time for a final 5 mile run in the park. It would be great to escape the heat and humidity for a few days! Since my left leg was still sore, I contemplated whether I was doing more harm than good. Would the extra last minute workout keep me loose and energized or would I limp to the start from depriving my legs of needed rest? I’d know the answer by Sunday morning!

I drove to the economy parking lot at Philadelphia Intl Airport ($8/day) in ample time to make our 1:50 departure time. However, much of that ‘ample time’ was used up circling around the airport loop when I missed a turn. Once parked, the shuttle bus got me to the United terminal, where I met the team at the gate. Most of the EPA J.I.M. contingent was on the same flight, so I slowly started learning who my teammates were. Mike Gunther, our coordinator, kept the headcount (14) on and between our legs to Denver and eventually, Anchorage. He had conveniently arranged for us to sit in the same general area. I sat with Alli and her mom, Joanne and naturally, the highlight was our “snack” of assorted little goodies, including chips and salsa. We kept hydration in mind and had a beverage at every opportunity.

We didn’t lose anyone in Denver and boarded another full plane for Anchorage. Overcast conditions prevented us from seeing most of the mountains we flew over. Not only was the movie lousy, but the tape kept skipping, so I tried to get a few winks. The descent through many layers of clouds lasted a long time and we were practically on the ground until we could see the mountains. No delays getting baggage, and we were greeted by a refreshingly cool drizzle upon leaving the terminal at 9pm for our bus to the Sheraton.

About an hour after settling in, my roommate appeared. Justin, part of “Team Cobey” from Atlanta, had been in Alaska for 4 days already, hiking and exploring. For most of that time, he’d been camping, so was very happy to take a shower and have a real bed. We had just enough time to introduce ourselves before calling it a day.

Friday 8/15/03 – Cruise to Nowhere
Mike had arranged an outing for most of the group and we met in the lobby at 7:30am. We’d take a 2 hour bus ride to Seward and enjoy the spectacular scenery on the six hour Kenai Fjords Cruise. But the weather wasn’t quite spectacular. In fact, it was awful! The motor coach was nice and roomy, and our Alaskan born driver pointed out many local facts as we wound our way south along the shore of Cook Inlet and Turnagain Arm. The bay is slowly filling with glacial silt, which can be hazardous, since people walk out on it during low tide and can sink like quicksand.

This was our day for spotting wildlife. Of course, we most looked forward to seeing some moose, which are reported to be everywhere… No Moose. But we passed by some rivers noted for the world’s best Salmon fishing, while out in the bay fishermen were participating in the annual Salmon Derby. We scanned the mountainsides for Dahl Sheep and Mountain Goats, catching a few glimpses. The foggy, drizzly day prevented us from viewing the full grandeur of the Chugach Mountains, but with a few breaks in the clouds, I could already suffice that the area is even more beautiful than I expected.

We arrived in Seward at 10am and boarded the Glacier Explorer for our cruise. Weather reports weren’t good, but we were advised that at least our boat was still going out. The captain was humorous and tried to keep our spirits from being dampened by the conditions. It was a full boat of around 120 passengers. We left the dock, passing two large cruise ships, some Coast Guard vessels, and numerous private and commercial fishing boats. Leaving the harbor, we headed for the wildlife viewing area at over 20 knots. 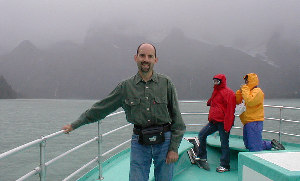 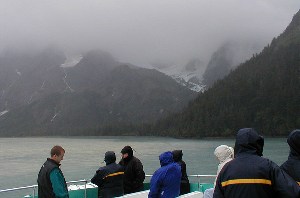 Fog and clouds continued to shroud the mountains, so we skirted close to the steep cliffs, looking for animals and various types of birds. 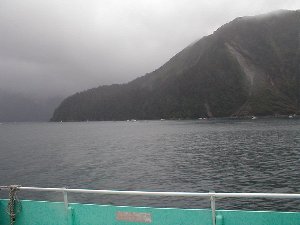 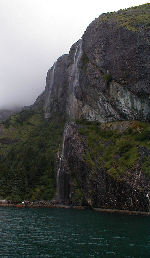 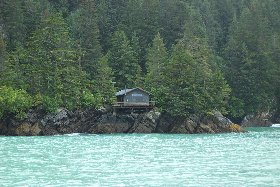 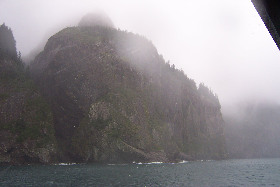 Our experienced captain pointed out Stellar Sea Lions, a “sneaky, sneaky” whale, and quite a few Puffins, which don’t fly well but are fun to watch. Everything was “awesome” to him. We’d go out on deck to snap photos, then head back inside to keep out of the rain. Unfortunately, the seas were too high for us to venture towards the many glaciers outside the bay, so we’d have to make due with the Puffins and the lunch of tasty Halibut that was served. We’d also get a refund of $40 each off the original $195 package for the day. By the time we returned to the dock, it was pouring. It didn’t help that people kept reminding us how warm and sunny it had been for the preceding three weeks! 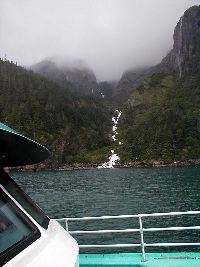 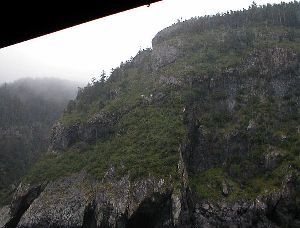 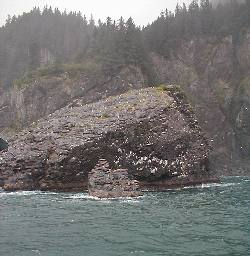 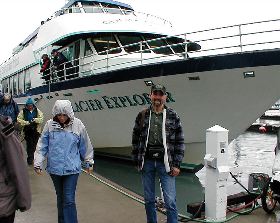 On the ride back, we were rewarded with some nice views of Explorer Glacier and Portage Glacier. Our driver stopped at each. 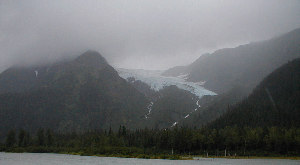 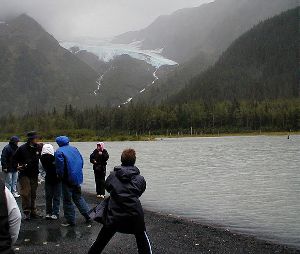 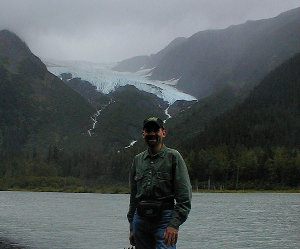 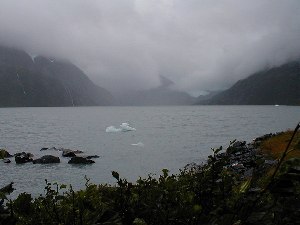 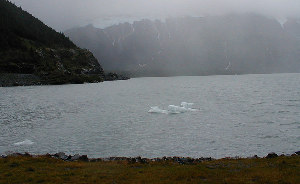 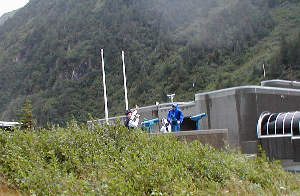 Then it was back to Anchorage. Most of the group piled into the hotel shuttle for a pleasant dinner at a local Round Robin. It still wasn’t dark when we returned to the hotel at 10pm. 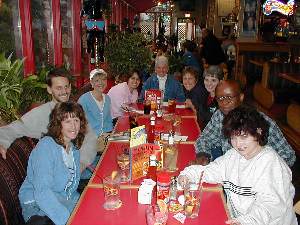 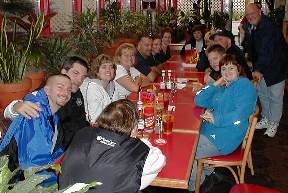 Saturday 8/16/03 – Art, Pasta and Inspiration
Twelve of us strolled downtown for a hearty breakfast. We also enjoyed the many flowers and some shopping for postcards and souvenirs. Then I went solo to the Anchorage Museum of History and Art, which was just blocks from the Sheraton. There was just enough to see, although it would have been nice to save my legs from so much standing. I got a much better idea of Alaska’s background, including the 4 original native groups that settled here (from Asia). Exhibits included everything from diaramas presenting native lifestyles, classic paintings of Mt. McKinley to information about the Alaska Pipeline. I was glad I brought a granola bar for a snack, and even more glad that I brought my umbrella! 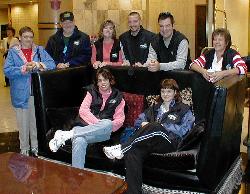 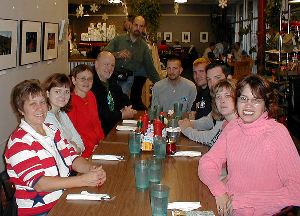 At 4:30pm, Team EPA gathered to introduce ourselves to our Georgia contingent, Team Cobey. There were 5 or 6 other chapters of Arthritis Foundation represented. The Pasta Party was enjoyable. We snapped more photos and listened to welcoming speeches from a local tourism official and Joints in Motion staff. 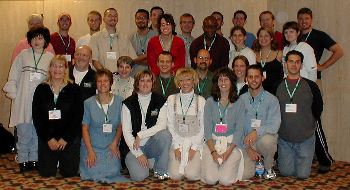 The inspirational highlight was the introduction of 93 year old, Norman Vaughn. Colonel Vaughn is a renowned explorer who was a member of Admiral Byrd’s 1927 to Antarctica in 1927, completed the Ididirod sled race numerous times. He was promoting his latest book, “My Life of Adventure”. His motto is “Dream Big & Dare to Fail”.

As a review noted:
“A master dog-sledder, wartime hero, and world-renowned explorer recounts the story of his life in an upbeat, plainspoken style. And what a life it is! From his expeditions to Antarctica to his World War II service to his part in rescuing downed pilots in Greenland, Vaughan, at 89, has lived–and is still living–a life of adventure.”


Dinner was over by 7:30, so we had plenty of time to relax in our rooms and lay out our gear for Sunday’s races. Our group was scattered among the events, which included the marathon, half-marathon, 5k and even a 10 mile hike in the mountains with an attractive, but married blond “hiker lady”. 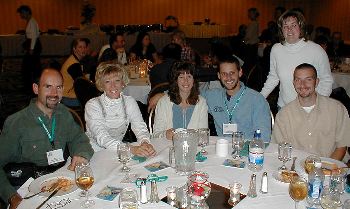