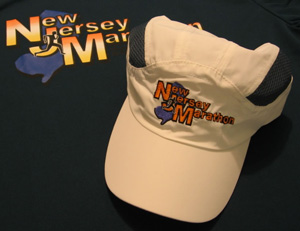 Born to run a PR!
On the same day that many of my Rebel Runner buddies were running the popular Broad Street Run (10 mi.), I ran 26.2 in Long Branch, NJ in a personal record time of 3:13:12.
The previous day was cold and blustery, with occasional showers, but conditions were good on race day.

NJM has a field of 2,400 runners and is run on a loop course. 5,000 half-marathoners race together with us, stopping after one loop while we (along with marathon relay runners) complete a second lap. 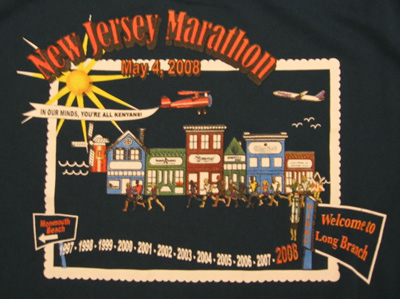 After a tough Marine Corps Marathon where I bonked before mile 20, I was happy with the training I had put in for the May 4 race on the north Jersey Shore. Caesar Rodney half had been a good run in challenging conditions, and my three 20-mile training runs all went well. But as is always the case when chasing a particular goal time, weather would be a huge factor in achieving my goal of a PR and reaching my more difficult goal of a sub-3:10 marathon.

Saturday was dark and dreary, with a cold wind that would not be fun to run against. After checking in at my motel in Eatontown, I drove the 6 miles to Long Branch to grab my race packet. What a congested area, with streets twisting and turning! Already under a time restriction to try to pick up my bib and head back to Eatontown for a 5pm Mass, I was unhappy with the crowded tent and long line to confirm race chip functionality. Of course, I was wearing a red Boston Marathon shirt to pump myself up. Barely time to buy one more PowerGel for the next day and I jogged back through the fog to my car.

Made it to church on time, and seeking any additional inspiration I could get, I appreciated the huge beautiful stone backdrop to the altar area, flooded with decorative lighting. As the priest made some opening remarks, he reminded everyone to wear red the following week for Pentecost. Then he points directly at me and says “like that man is wearing now” and I my initial reflex was to raise my arm as if to say “yeah, I fouled him” but then I remembered that this wasn’t a basketball game and that I really didn’t want to bring additional attention on myself.

After Mass, I stopped at the Cobblestone Diner for my pre-race dinner, which worked out nicely. Not crowded, and the Kentucky Derby started on a large screen TV just moments after I was seated. Got to see the thrill of victory for “Big Brown” and agony of defeat at the same time as “Eight Belles” had to be euthanized just after finishing. That was pretty ominous and certainly not something you want to see the day before a race.

Final boost of adrenelin for the day was watching the Flyers beat the Canadians to move on in the playoffs.

Mother Nature was kind and conditions were good for race day. I departed the Crystal Inn at 5:30am to head to the beach. [That sounds weird.] Good leg-stretching walk to the Porta-Potties near the start area on the boardwalk. I downed my “5-Hour Energy” shot and started getting excited. Good job on the National Anthem by the same runner who’s done it for the past several years and race started nearly on time. Cool 50 degrees, but no sun, no rain, and especially no wind!! I kept close to the official 3:10 pace runner right from the start. He was wearing an orange shirt and hat and carried an little orange flag with that special number on it. We were the first pace group of the 8 or so overall for the combined (full + half) 8,500 runners. Starting up near the front, there were no congestion problems, other than many sharp corners to navigate.

I tucked myself in to our group of around 25 who all wanted to stay as tight as possible to our pacer Matt. It helped that he was tall. I had taken off my throwaway shirt before the gun went off, but only tossed it after a couple miles. My short sleeve Boston tech shirt was a good choice for the conditions. I later tossed my [Matlack] hat at mile 7 and my magic gloves [from very first marathon] at mile 14. Ran out of things to toss ;-(

I kind of felt like hot stuff staying with the 3:10 people and was happy we stuck together so well. The funny thing is that for a small marathon, I was with this pack for miles and miles, and had to be very careful not to bump others at all of the turns and even looking for ruts in the road. Combination of neighborhood streets with main streets through towns such as Broadway and Ocean Avenue. Decent spectators. Not much music. Little chatter in our group.

One piece of early excitement is when one of the big guys took a tumble. He got up so quickly that it was almost a half mile later that blood started dripping from his shoulder and elbows. Of course he said he was fine, and he eventually dropped our group in favor of more wide-open space. 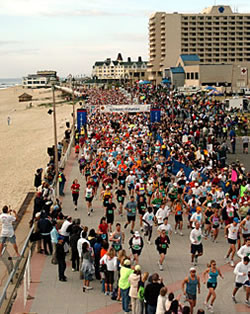 Official MarathonFoto.com race start photo
The start photo is from a previous year.
It was too foggy to see the nearby hotel in 2008! 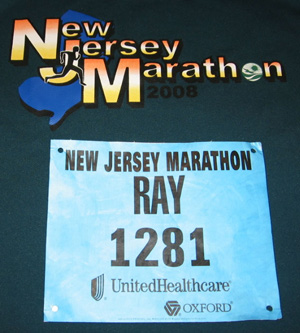 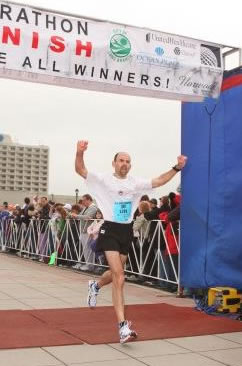 The 2 loop course made the halfway point much more fun, with crowds of spectators cheering on the half-marathoners as they finished up on the boardwalk. I had thought that suddenly losing 2/3 of the runners would be a strange experience, but since I was still tucked in with the group, there was barely any difference. Even water stops remained a challenge since we were so tightly packed. The only sense that we were more “alone” was observing the many throwaway shirts that lined both sides of the road in what had been miles 1-3.

Things were going well and Matt was doing a fine job of maintaining even pace, sometimes slowing after milemarkers to keep us from putting too much in the bank. But suddenly, just after mile 16, tragedy struck. Matt bailed out, saying he had a problem and was sorry. Since he pulled up “lame”, we quickly and mercifully euthanized him and continued on our way. But of course, the same two words were racing through each of our 20 or so minds, “Oh S***!”. This is not something you plan for during 3 months of training. We were filled with panic and nominated a guy in an orange shirt to “be our leader”. He immediately replied that it was just coincidence that he was wearing the same shade of orange as Matt (who we never did hear from again). That didn’t make us happy, so we then turned to a purple-wearing TNT runner who had been with us since the beginning and seemed to have many supporters along the route. He wasn’t enthusiastic about taking over. Our elder member (wearing a 50-stater shirt, of course) stated that this was the best maintained pack that he’d ever been part of…

That remark turned out to be the kiss of death. After a mile of staying together (and predictably picking up the pace in our panic) we started to disintegrate. I started dropping back, thinking they were moving too fast. Between miles 17 and 18 we got strung out and our proud pack ceased to exist. At mile 20, I believed I had a shot at 3:10, but I was also starting to lose my stride. Pretty soon I was alone. Luckily, we were now passing walking participants and there were also a few places where runners were coming down the street in the opposite direction. By mile 24, I realized that not only was 3:10 now out of the question, but it would take a serious effort to break my 3:14:02 PR.

A final stretch of boardwalk (mostly concrete) begins around mile 25 and I knew that my legs would be OK as long as I remained positive. Between the cheering crowd and snaking my way past more of the walkers, I found a decent kick at the end and heard my name announced as I crossed under the finish banner with 3:13:15 on my watch. The sun was starting to come out and I was smiling. 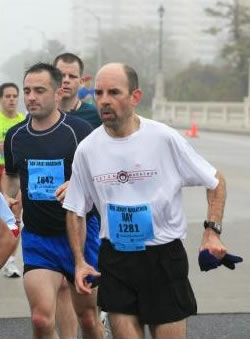 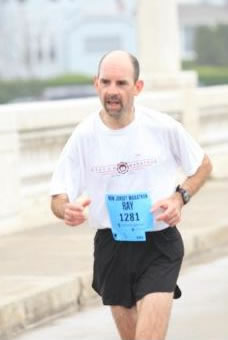 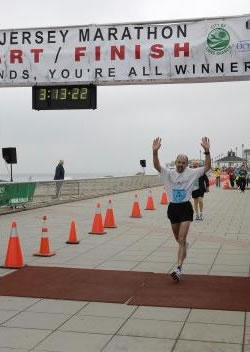 It was only the following day after results were finally posted online that I was shocked to learn that I had won an award for placing 2nd in my age group (M45-49) out of 138. The race staff graciously offered to mail the award and included a response to my inquiry about our ill-fated pacer:
As for the pacer, I spoke to a friend of his, seems he felt very ill and his heart started racing, something that never had happened to him before. He is fine now but is going to get things checked out. I know he has one iron man under his belt so hopefully his good physical condition will work in his favor.

The Lord is kind and merciful. Slow to anger and great in compassion. 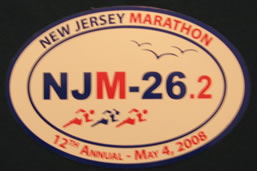 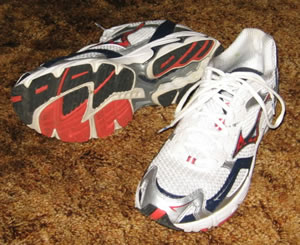 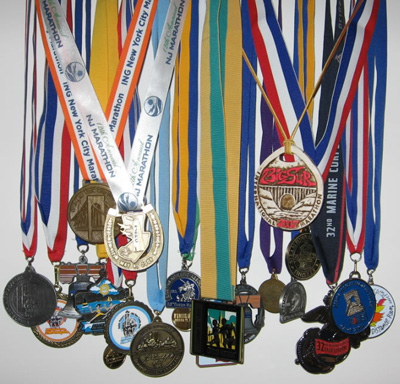 Ray’s full and half marathon medals 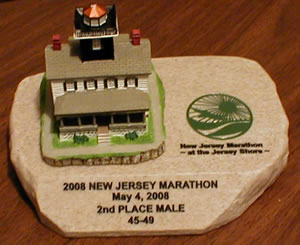