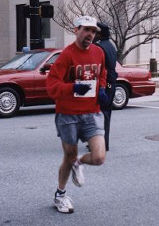 Marathon Man did little running over the last months of 2004. He had to exercise patience to let his sore left Achilles Tendon slowly recover from Chicago. But that didn’t stop him from entering some
local races!

The Rebel Runners website was launched in January. Along with this page, it contains results of some Wilmington area events. 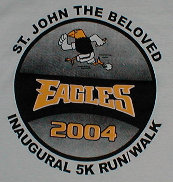 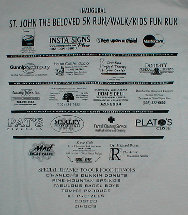 I finished in 8th place overall and earned a medal for 2nd in my division (M 40-49) with a time of 21:17. Lack of training due to the sore achilles accounted for a slower time than I would have expected.
Conditions were nice! 48 degrees and clear for the 8:30am Saturday race at my parish church. It was the inaugural run, which meant a small field and the opportunity for me to place for the first time. Moderately challenging loop course wound up the hill and around Delcastle before descending back down through Sherwood Park towards the finish. 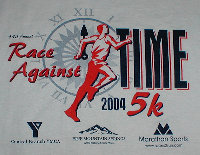 It’s difficult to stay motivated to train during the cold winter months, so it helps to have a group like the Rebel Runners to run with on those frigid Thursday evenings. Of course, when you have a good dinner to look forward to, that helps! We hit different local eateries each week, including Cafe Napoli, Joe’s, McGlynn’s Pub, Tyler’s, Border Cafe, Nino’s, and others. 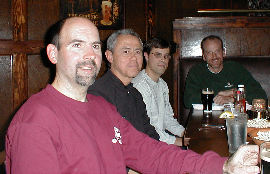 29 degrees and clear. 400 runners were delayed slightly due to fire alarm at the downtown Wilmington YMCA. Rebel Runners had our photo taken. Tough course, especially the last steep hill. My best time out of 3 at this event with a 1:12:20. I finished 85th of 400 overall. Pizza and pineapples!

My sore left achilles tendon seems to be healing, although I continue to wear a brace on that ankle during most runs. 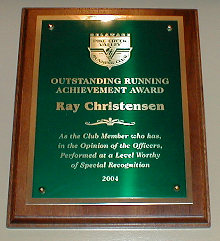 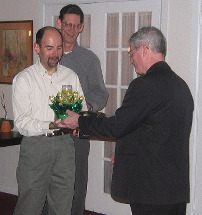 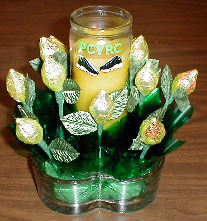 Marathon Man proudly accepted an Outstanding Achievement Award at the annual PCVRC Awards Banquet. “Coach” Dave made the presentation, but club members seemed more interested in the beer bottle collection than the running accomplishments. Two other Rebel Runners were recipients as well. Dinner was good and it was an honor to sit next to “Runner of the Year” Richard Webb, holder of several Delaware state records. 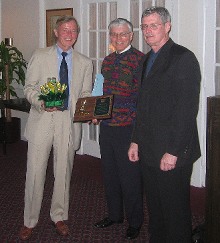 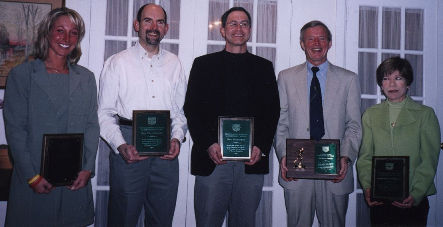 Rebel Team Takes 2nd Place
Greg urged us to enter the coed “team” competition, and most of the team assembled at the Rebmaster’s residence to load up on carbs the night before the race. 7 of us enjoyed pasta in the Beer Room, after the official dedication of the Dan Weintraub Beer Shelf. On the IR list, Jack drank beer to prepare him to run the Rebel cheering zone where the course passed in front of his house. 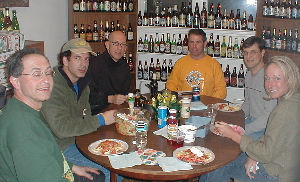 Pasta in the Beer Room

The Race
Your humble Rebmaster felt strong and was pleased with his 1:37:30 chip time. But our team captain Greg led the way. Next came Silent Mike, who earned himself a nice personal record and Kelly picked up some hardware for placing 3rd in her age group. Tony BBQ destroyed his own P.R. and was breathing down Ray’s neck for the entire race. Rich decided to sit down twice on the course, and still found a way to post a decent time! 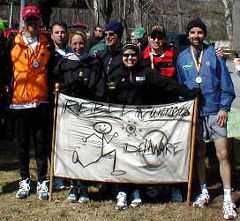 The Rebels were proud to represent Delaware as the only team from the First State and took 2nd place in the coed division. After grabbing some pizza and donuts, we returned to the team cheering zone to celebrate, leaving Greg and Tony to accept our medals at the ceremony on Rodney Square.

Unfortunately, my achilles has been quite sore for the past couple of weeks, ever since running on four consecutive days in March. This included a grueling 17.5 mile run comprised of 5 “outside loops” around Delcastle to prepare me for the hills in Boston. With the marathon just weeks away, I have no choice but to continue running enough miles to be in reasonable shape. I won’t run on consecutive days again.