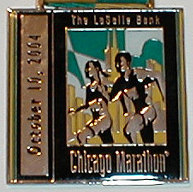 The Chicago Marathon would be run under a brilliant blue sky with little wind. Ray knew that this would afford him his shot at a Boston qualifying time of 3:20.

This was my 5th 26.2 mile race, but the most pressure I’d put myself under. I’d have to take ten minutes off my awesome Paris time. But I was pain-free, fully hydrated and loose. Upbeat music kept my feet tapping as we waited for the gun.

Though struggling to hang on at the end, I ran the perfect race. My chip time of 3:19:46 had smashed my PR and qualified me to run Boston.
I was walking [OK, hobbling] on air!!!

The day started at 5:30am with some push-ups and stretching in the hotel room. By 6am, we were suiting up and meeting Bill for the walk to “Charity Village” in Grant Park, where Arthritis Foundation and a dozen other charities had tents for us to stow bags, hydrate and use porta-potties.

The cloudless sky allowed temperatures to climb to the 50’s by start time, meaning that “throw-away” clothes wouldn’t be necessary. At 7:30, we headed for our corrales. I joined the other purple bibbed runners in the “preferred” area, directly behind the green bibbed “competitive” runners and of course, the “elites”.

The singer of the National Anthem would also run the race. There was only moderate congestion and I was able to get out with the 3:20 and 3:15 pacers. The course heads to the north part of the city, winding back and forth across the Chicago River several times. My pace band was too hard to read while running, so I just used my watch and the official clocks at each mile marker for splits.

For most of the race, I’d be near the runners wearing their “3:15” target times on their backs. This meant that I was going out a little fast, but my plan was to have almost 5 minutes “in the bank” by the halfway point. Was bib #3973 making a statement? 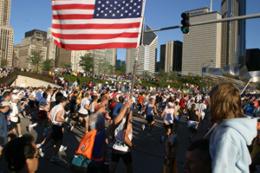 Maintaining pace, fueling with Gatorade, feeling the crowd’s energy
I was at the pace I was looking for, around 7:30, virtually until mile 18. I unsuccessfully tried to slow a bit several times, but was just as happy to have a half-marathon split of 1:36:23, just a half minute slower than my PR at the Philadelphia Distance Run back in September. I was running strong, but really started to work around mile 18, when we started spending more time in an industrial area south of the loop.

The crowds were more sparse, the sun started beating on us and we were feeling tired, but the long water stations pumped us up every mile or so. I grabbed Gatorade and then water at every one. We headed south.

It was nearly mile 23, at US Cellular Field (formerly Comiskey Park) before the course turned back north for the home stretch. I hadn’t slowed to a walk at all, so I was coated with sticky Gatorade and afraid that I’d cramp up if I did walk. Each mile saw me losing about 45 seconds from the cushion I had built up, but I knew that my dream of qualifying for Boston was still alive.

That dream nearly ended when, at 25.8 miles, we turned right to head back into Grant Park for the finish. Upon turning, the only significant hill on the course was staring at us. I knew that I’d lose some precious seconds, but once attaining the top of the hill, victory would be in sight!
I made it without crashing and turned left where the finish line and glory awaited. I was going to do it!!! Training hard for 4 months was about to pay off. But more importantly, I’d soon be able to stop torturing my legs and get a proper few gulps of Gatorade!

Whatever ugly kick I had left brought me past the cheering crowds to the finish. My watch read 3:19:49 and I was in heaven. A medal was placed around my neck, a foil blanket was wrapped around me and my timing chip was removed by a helpful young lady. Water, Gatorade, bagels, bananas, cookies… Yes, this was indeed heaven. When my could barely carry any more provisions, I found a table of Michelob Ultra at the end of the food line. Ordinarily, I’d abstain from a beer for at least a little while, but I had to start celebrating! As it turned out, the water and Gatorade were warm, but the beer was cold, so it was a good decision.

It took 15 minutes for me to leave the runner area and hobble through the throng of spectators to the Charity Village to bask in the glory under a cloudless sky.

Team EPA walked back to the hotel. After a relaxing shower, I limped a few blocks to the local Cathedral to thank God for a heavenly day. Then we headed out for a heavenly meal. The Hard Rock Cafe had just the celebratory atmosphere I was looking for. Steak was OK. The evening was rounded out with a visit to the official race celebration party at the Grand Ballroom at the end of the colorful Navy Pier.

Joints in Motion team: Chicago and other chapters Photo by Cary 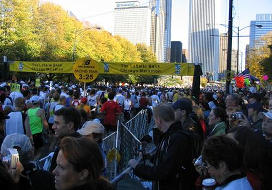 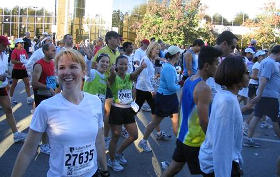 Monday 10/11/04 – Stroll around Navy Pier, Fly back to Philly
Another gorgeous day greeted us as Bill, John and I strolled out to the Navy Pier to loosen up our legs prior to our early afternoon flight. I was already looking forward to sharing my joy with the Rebel Runners on Thursday evening. They were kind enough to send me some congratulatory emails.
Time to sign up for Boston! 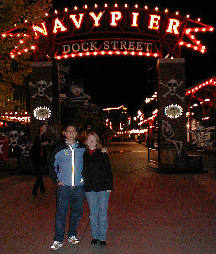 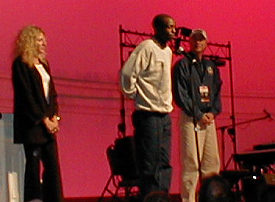 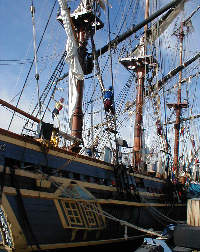 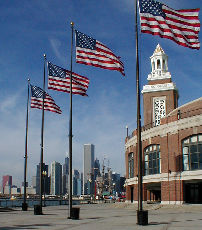 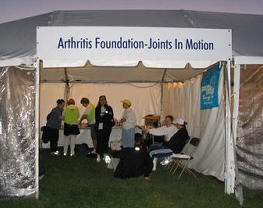 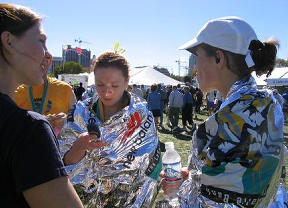 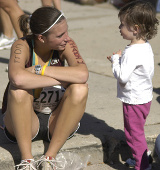 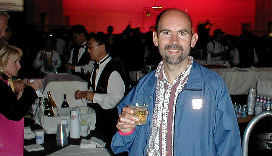 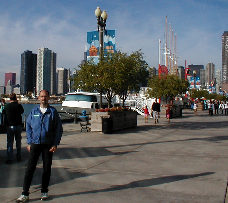 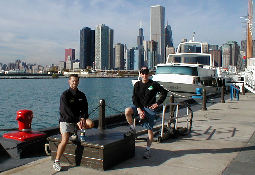