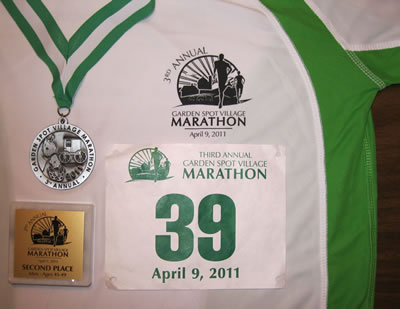 My 19th marathon, but just the first that I slept in my own bed the night before, due to the proximity of the Pennsylvania Dutch Country near Lancaster, PA. It’s a beautiful course on rolling hills past countless Amish farms.

The Garden Spot Village Marathon was run on Saturday, 4/9/11 in perfect weather conditions…

Low Key Event
For my Spring 2011 marathon, I wasn’t concerned about finding a fast course, since I hadn’t been running fast lately. Barely finishing under 3:30 on the fast Wineglass course in October 2010 was disappointing, even though my training was effected by Achilles Tendonitis. A low key, local race would be fine and once I finally looked at the calendar, I had just enough time to prepare for Garden Spot Village Marathon.

This would be the 3rd year for that race and several friends had run the full or half last year. It was hilly and small, but close enough that I’d be able to sleep in my own bed the night before for the very first time – and this was my 19th marathon!

Training Difficulties
I jumped into “official training” about 16 weeks out and avoided injury and even major soreness. But I wasn’t getting in those extra few miles to attempt improvement and felt sluggish much of the time. Long runs were more of a problem than I’d ever had. I ended up only running a complete 20+ miles just once, with 2 other attempts reduced to walking several miles each. This lowered my expectations, but also allowed me to go into race day without any pressure. I’d try to start at an 8 minute pace, hoping to finish in under 3:40, not sure if I could even accomplish that due to the hills.

Send-off Concert
My Rebel Runner friend Chris brought me on a good training run several weeks before the race on the slightly challenging Wilmington Greenway trail, similar to the race course since there’s little level ground. He’s the singer in a rock band and they played at a local bar two nights before the race, so I thanked him for “arranging” the send-off concert, especially since he’d be running also. Meanwhile, my friend Lenora baked some magic cupcakes and brought them to our typical Thursday evening send-off dinner. (I knew they were magic right away.)

Team Delaware
It was nice to have some friends to do the event with. Chris James was training for Big Sur (although that course was changed drastically due to mudslides) and registered for Garden Spot as a “supported long run” of 22 miles. Dirk Sweitgart would drive both of us out since his parents live in the retirement community hosting the race. Dirk did the Half last year, winning his age group, and was running the Half again. On our 50 minute drive that morning, he pointed out various sites along the way and drove parts of the course for some last minute strategy. Parking was plentiful, just steps from the start/finish.

Perfect Conditions
The temperature was a near perfect mid-40s, the sky was overcast, and there was only a hint of a breeze. This lifted our spirits as we checked in for our bibs & shirts. A marathon without chip timing? It makes sense to go “old school” when you’re in Amish Country! We lined up for an on-time start in the center of the Garden Spot community. 240 of us were doing the Full, and would be joined for the first 7 miles by 500 Half Marathoners and a number of relay runners.

I seeded myself at the right place near the front of the pack and had very little jockeying to do. Right from the start, the entire course is rolling so I had already decided not to concentrate on any particular pace. But a 7:25 first mile was a little too aggressive and I tried to ease off a bit. I would have panicked if I was shooting for a PR. Even with a fast start, Chris and Dirk were out of sight ahead of my by mile 3.

Cows, Horses and Buggies
The entire course runs through farmland, and by the time I was done, I’d never seen so much livestock in my life. It was very calming to constantly be looking left and right to see cows and horses looking back at us from their pastures. Goats, sheep, chickens (and one monster-size turkey), were also enjoying the peaceful morning. Cute little Amish children posted themselves in front of their mailboxes to watch the runners go by. All of it was on country roads with virtually no shoulders, so there were occasional cars and quite a few Amish buggies. They gave us plenty of room although a couple places got congested enough to make things interesting.

Rolling Hills
When much of the race is run on roads like “Hill Road”, “Ridge Rd.” and “Scenic Rd.”, you know what you’re in for. The elevation chart had me a little nervous about a significant up and down hill in the early miles and then again towards the finish, but because we were constantly going up and down anyway, the long grades were less noticeable. It helped that the hills afforded pleasant views to help take our minds off of the road. It’s never fun to “lose” those who are just doing 13.1, especially when they’re a majority of the participants. They had a button-hook turnaround soon after we descended the steepest grade on the course. That would not be something to look forward to on the way back.

Comfortable and Controlled
I was able to slow my pace at a fairly steady rate after that fast first mile, but was still banking some time. My half split of around 1:41 felt about right and the runners within sight all seemed to be maintaining their positions. Sometimes I’d pass someone on a downhill, only to be passed by them on the way back up. The sun never really broke through the clouds, but wind didn’t pick up either. Water stations were well manned and they offered gels at several of them.

Feeling Good
After the half, I rarely looked at my watch. When I didn’t feel myself slowing much over miles 15, 16 and 17, I grew more optimistic about a achieving my goal – as close to 3:30 as possible. After a 3 mile loop on the western part of the course, it was nice to turn for home, seeing still headed out there. More farm animals, more cute Amish children, more horse-and-buggy traffic. This was the perfect way to tour Pennsylvania Dutch Country!

Gut Check
Other than Gatorade and water, I fueled up with gels at mile 11 and mile 20. My gloves couldn’t keep my hands warm enough to rip them open without a bit of a struggle, but I didn’t panic. Seeing the sights kept my mind from dreading those final miles, but with a long approach to the nasty little hill near 20, I had time to plan on definitely walking the most difficult portion of it. Many others did the same. I was pleasantly surprised how easily I regained my running stride after that eighth mile or so.

I Feel Great
My confidence increased with each milemarker and by 22, I was surprised that my legs were only starting to get slightly heavy. Around 23, I came up behind Chris, who was walking after shutting it down as planned. I got a little carried away and in the midst of a few runners said one of the stupidest things a runner could say out loud, “I feel great!” Quickly realizing that the wheels could come off at any point, I actually laughed to myself how idiotic it was to tempt fate like that. But since I was having a good day, that ended up relaxing me even more!

Strong Finish
At mile 24, I was now passing half-marathoners and realized that I’d finish under 3:30. The hills were over, so I just put things on auto-pilot and continued to enjoy the scenery. No leg cramps at all, and only very slight right Achilles soreness. The final turns into Garden Spot were like a victory lap, and I even caught a couple guys down the stretch. My 3:25:19 time was 4 minutes faster than my Wineglass time had been and I was ecstatic!

Stretch, Food, Photos
I happily grabbed my medal and turned down a foil blanket, then stretched before heading over to see what goodies they were serving. Oranges, bananas, chocolate milk, bars, and chocolaty trail mix were all delicious. I found Dirk with a trophy in his hand for finishing “3rd Place Grandmaster” in the Half. As we waited for Chris (who likely would have won his age group) to walk in, I found out that I took 2nd in my age group, so I was now on even more of a high.

Chatted with some of the guys who’d been around my time and got my camera from Dirk’s car. Don Ropp and his friend Denise joined us for some group photos in front of a giant cow on wheels. Ron Horne of Pretzel City Sports did his usual humorous awards ceremony at 1pm and then it was time to head back to Delaware. 240 finished in the full, with over 500 in half. 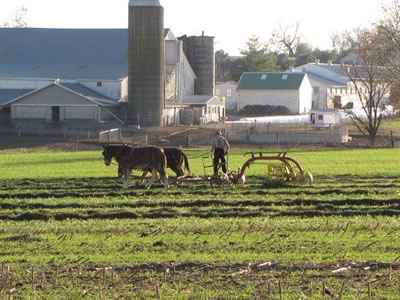 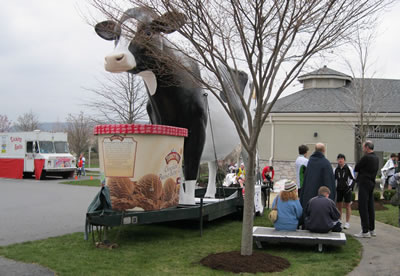 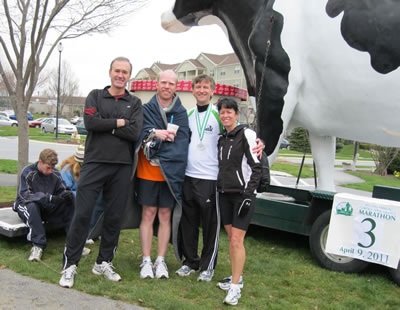 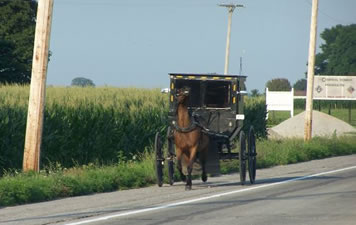 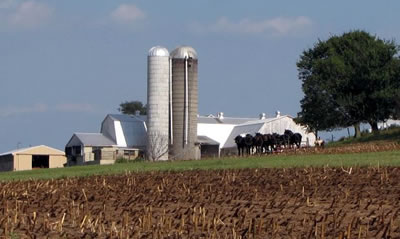 Amish farms with plenty of cows 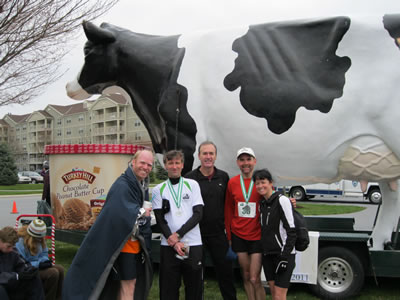 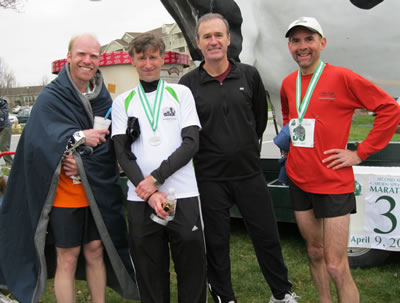 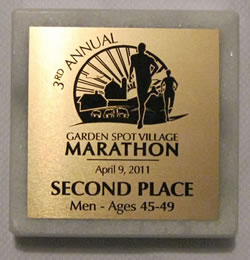 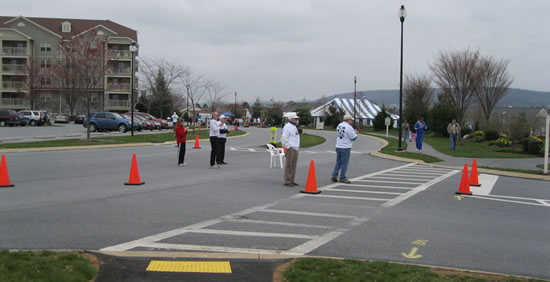 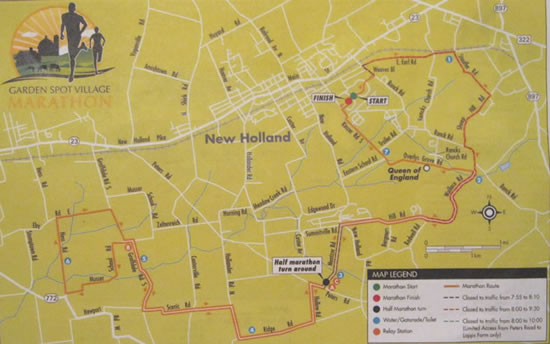 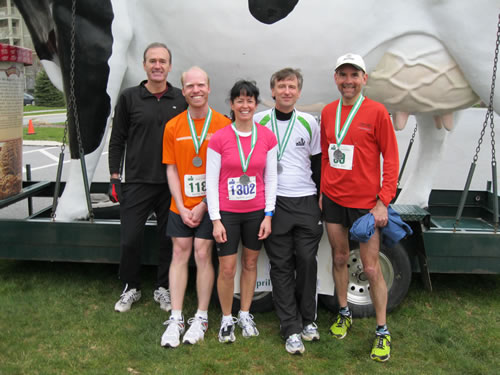