Marathon Man took on the best in the world at the hallowed Boston Marathon. It is run each year on Patriots Day, a state holiday, so the crowds were out in force.

From the start in Hopkinton, over “Heartbreak Hill” and into Boston, they lined the route to cheer for Ray. He was one of 32 runners who took a three day chartered bus trip and represented about half of the total Delaware contingent. The trip was arranged by Doug White of the DE Sports Club, running his 32nd Boston Marathon!

Saturday 4/16/05: Bus, Number pick-up, Hotel
It’s 7:55 on a crisp and sunny morning as I arrive in the parking lot at New Castle County Airport. Runners from all over the First State are assembling to board Gregg’s chartered bus for Boston. 31-time Boston Marathoner Doug White welcomes the group for their annual pilgrimage and confirms the weekend’s itinerary. Our driver, Don, gets us to Boston without delay, until traffic stops us for 15 minutes in a downtown tunnel just a mile from the convention center.

At 3:30 pm we arrive at the expo and immediately collect our bibs and T-shirts. More than any marathon I’ve seen, everyone buys jackets and other ‘official gear’ to proudly display their well-earned badge of honor. Ray is no exception and gladly forks out $85 for a 2005 jacket. I really felt like a veteran runner, since there were booths representing 3 other marathons I’d run! 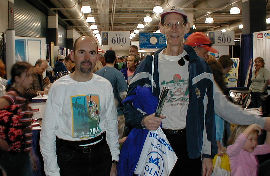 5 pm: We arrive at the Crowne Plaza Hotel, Natick, MA – not far from the 10 mile mark of the course. Dave Farren hands out keys and I meet my roommate for the next 3 nights, Larry Price, here for his second Boston. We unpack and walk down the busy road to find some steak to devour. One place had a 25 minute wait, and another was too pricey, so we settled for a surprisingly tasty meal at a Pizzeria UNO – Chicago style grill. That felt right, since I was wearing my Chicago Marathon shirt. Our walk was long enough that I decided against any further warm-up runs and would line up in Hopkinton on 3 days rest. We had plenty of time for a good night’s sleep on the comfortable beds, but we weren’t sure what to do with 4 pillows each!

Sunday 4/17/05: Mass, Red Sox and Pasta Party
645 am: Wake up, stretch and do some push-ups prior to a shower and shave. Another sunny day beckoned.
840 am: I met Bill and Carl in the Lobby and took the hotel shuttle to 9am Mass. Our priest spoke at a healthy pace, but the cantor and organist were mid-packers at best, so we barely received communion before departing. As we started jogging across a field towards the hotel, we heard the horn of the faithful hotel shuttle bus, which then whisked us back to meet our team bus for our 10am departure for downtown Boston. Upon drop-off at the expo, I grabbed a bowl of Clam Chowda (a healthy breakfast) with Bill at a mall next to the convention center. Then we joined Dave, Dan and Jerry for the mile walk to Fenway Park, taking photos as we approached the huge Citgo sign which marks one mile to the marathon finish line. 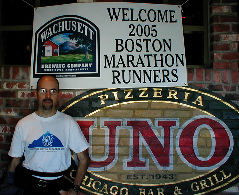 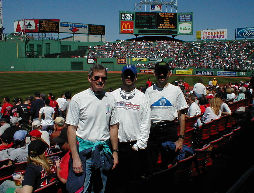 After a 20 minute wait, we sat with hundreds of Red Sox fans for lunch at Pizzeria Uno (sound familiar?). I didn’t expect cold spaghetti in my chicken salad, but welcomed the bonus carbs!

Hitting a ballgame at Fenway certainly added to the excitement of the weekend. It was also a super excuse to avoid tiring our legs with sightseeing the Freedom Trail. We utilized the hour before the 2pm first pitch for some group photos. Our cramped, last-row seats behind first base were pleasantly cool and shady. The Sox beat Tampa Bay 3-1 behind knuckleballer Tim Wakefield. The following day, as Curt Schilling pitched, his wife would join us in our little 26.2 mile jog. (Coincidentally, she had run with 14 of my fellow “Rebel Runners” at January’s Rock’n’Roll Marathon in Arizona.) 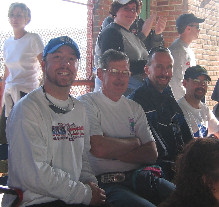 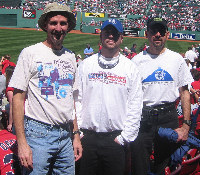 After the game, Bill and I headed for the crowded Metro. Everyone seemed to be wearing either Red Sox gear or marathon shirts. A long, but fast moving line brought us to the tent for the pre-race pasta dinner. Great organization. Great food. We sat with runners from Canada, Maryland and California. Then we still had an hour left to relax while munching on baby carrots, Fig Newtons and ice cream bars. The bus made an on-time 730pm departure for the 20 minute drive back to Natick. 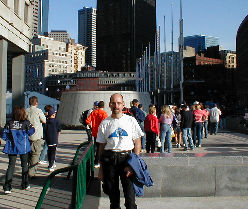 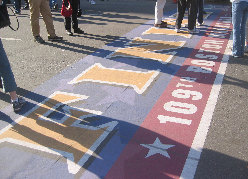 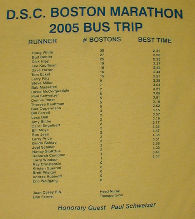 Just enough time remained for the ceremonial laying out of gear before turning out the lights. I always sleep well before races, but for a while, Larry’s snoring had me just a little nervous about accomplishing that!

At left is the back of our 2005 Boston Bus Trip T-shirt, listing participants, their number of Boston’s completed, and best Boston time.