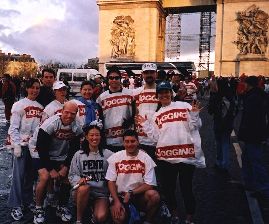 Team Delaware at the start

Sunday, April 4, 2004 was race day. This is why we trained throughout the harsh winter and flew to Europe.

Weather was good. Cool, mostly overcast, and just a slight breeze during most of the morning. The field of over 30,000 runners had to navigate narrow streets. Water stops were like battle zones, with elbows flying and banana peels littering the pavement.

Running through the narrow streets

Race time was 8:45am, so we assembled in the lobby at 7:15 to head for the metro. From Rue du Bac, we made one change of trains at Concorde station enroute to Charles de Gaulle Etoile. Most of us wore our official marathon plastic trash bags to the starting area in the shadow of the Arc de Triomphe on Champs d’ Elysees.

There can’t be a more magnificent setting for the start of a race! The 28th Marathon de Paris would be run in good weather conditions. Although it had been raining when we got out of bed, the skies had cleared and temperature was now in the low 50s, so the plastic bags provided plenty of warmth. Time for some final photographs of an upbeat, confident group of runners about to take Paris by storm!

I squeezed into the blue corral (3 hour 30 minute runners) along with Mike and Greg. Don and Chris were up ahead somewhere, while Rich and the ladies (Vicious Vixens) were behind. Someone handed me an energy gel, so I squeezed it into my mouth and finished the bottle of Gatorade solution that I’d brought along. Leading each pace group were several “hares” who would maintain a steady pace for runners with that particular time goal. Each had some helium-filled balloons tied to them so they would be easily visible for some distance.

The sun shone brilliantly as the race started down the wide, majestic Champs d’ Elysees toward Place de la Concorde. (The following week’s Sports Illustrated featured a two page photo.) But the cobblestones were slippery and we had to dodge the thousands of plastic bags cast off by runners ahead of us. As we passed the Louvre and continued on Rue de Rivoli, the course wasn’t as wide.

The field of over 30,000 runners had to navigate some narrow streets, keeping us bunched up. After about 5 kilometers, Mike, Greg and I were each on our own. Speaking of kilometers, mile markers were sporadic, so I was happy that my intended pace was an even 5 minutes per kilometer. Most of us agreed afterwards that it was mentally helpful to count down the km markers to feel your progress. 26.2 miles is 42.2 km.

At 10K, we entered Bois de Vincennes park, where we twisted and turned around the wooded paths. Our Delaware support staff planned to be visible on the right side of the course at a few different locations, but I was unsuccessful in locating them. As it turns out, it took them some time to depart the start area, so they only got to the first intended area as the ladies approached it. Upon leaving the park, we were at the halfway point and I was happy to be maintaining my pace well, with the blue balloons approximately 200 yards (OK, 200 meters) in front of me.

As is standard, there were small bands and drummers at various points along the course. Aside from the parks, crowd support was great, but I grew annoyed in several places where the overly exuberant spectators spilled off the curbs and into the street, making the narrow course more crowded in the process. That took away precious seconds from my time and I cursed under my breath! But the most challenging points along the way were the water stations, where the elbows flew as we jockeyed for position to grab our plastic bottles of water and pieces of oranges and bananas. Especially early on, they were quite the battle zones! Even if one escaped without black and blue marks, you’d better be watching the ground for the dangerous discarded bottles, orange and banana peels. Yes, pretty hazardous.

At 25K, we started a long stretch along the Seine River, at times running through dark tunnels. I later learned that one of these very tunnels is where Princess Diana died in the car crash. Because the course remained crowded, some of us weren’t even aware when we passed the Eiffel Tower on the other bank of the river. It was just too difficult to get in any sightseeing if you were shooting for a particular time goal.

At 30K, I still felt fairly strong and grew optimistic about finishing close to my lofty goal of 3 hours 30 minutes (8 min/mile pace). I was now holding the gloves I’d worn for the first third of the race. When we were in the sun, temperature became a factor, but a slight breeze caused most of my sweat to dry. I took a chocolate gel just minutes before we hit a water station where I was promptly handed two more. One went in my pocket, while I carried the other along with the gloves in my other hand. Where was that support team?!

The slight grade leading into the Bois de Boulogne park is where the race became more of a challenge for me. I was now constantly searching ahead for the next Km marker and trying not to lose ground to the blue balloons. As we silently twisted and turned around the park, I was encouraged as I passed more runners than were passing me (which my split times would later confirm). But that didn’t make it a walk in the park, to be sure! [Sorry, very bad pun.] The route carried us through the park [yeah, I wish it carried us] from about 33K until nearly the finish area. I actually considered taking a glass of wine at an unofficial refreshment stop with under 2 miles to go. Couldn’t chance it. Doing too well.

Once I saw 40K marker, I knew that barring unforeseen muscle spasms, I’d at least have a PR. I may have even had a slight smile on my face as I made the turn onto Avenue Foch [and for the last time, that’s pronounced FOSHE!]. The crowds of spectators were back, but I barely heard them as I kicked to the finish. (Something slightly resembling a kick, anyway.) My official Marathon Man watch showed 3:31:30, so I was one very happy American in Paris!

After removing my time chip, I was handed a medal and a classy blue rain poncho. It was just cool enough to put it on prior to joining the herd at the water tables. Several runners were lying on the ground or slumped over the water table, completely exhausted or nursing severe cramps. This area was almost as crowded as the corrals had been at the start, as impatient athletes grabbed water and more of the oranges and bananas we’d been dining on along the course. I really craved a bagel or slice of pizza. We finally piled through the narrow gate into the reunion area, which ran several blocks along Avenue Foch, ending at non other than the Arc de Triomphe.

Unfortunately, it soon became apparent that they had neglected to set up the alphabetized reunion zones, so there was simply a mob of over 30,000 spectators trying to meet up with their respective one or two of 30,000 runners. Oops! So much for organization.

Team Delaware had agreed to meet in the area designated for the end of the alphabet, ‘Z’, to be precise. It was discouraging not to be able to share such an emotional moment with friends experiencing the same thing. Twenty minutes after I finished, I came across Mike, who was also happy with his results. We walked to the Arch and back to eventually meet up with Barbara, who had survived a rough morning and especially complained about the long, dark tunnels in the midst of thousands of very smelly men.

We waded through the mob for another few minutes and decided to head back to the hotel, the only sure place to meet our group. The only problem is that both Mike and Barbara had given their money to the support team to hold onto. Luckily, I had 5 € in my pocket (along with emergency Tylenol and my Metro pass), enough for a couple Metro tickets, so we headed back, not especially enjoying the stairs into the subway.

After a shower, the lobby was the main meeting area to exchange race stories. I was looking forward to a nice steak dinner that some others had mentioned craving after living on pasta for the past week. Unfortunately, it was going to be very tight for me to get back from 6:30pm Mass at Notre Dame before the others would be heading out to eat that evening. I did Mass alone, riding the Metro part of the way there. I arrived in time to take one of the last remaining seats, albeit behind a huge column. It was pretty close to being in heaven to be able to attend Palm Sunday Mass in one of the most famous churches in the world. Especially when the awesome organ filled the cathedral with music. I was grateful to have a seat, too. Thanks, God!

Clutching my pieces of hedge, their tradition in place of handing out palm, I walked through the Latin Quarter back to the hotel. Don was in the room and told me that most of the others had already headed to a restaurant [where else but…] on Champs d’ Elysees. He hadn’t joined them since he usually eats very light after a race. So I joined him for a visit to the Shell station mini-mart next to the hotel, where we picked up some of those delicious sandwiches and some drinks, which we ate while watching CNN in the our room. After that, we headed across town to rejoin the group for a little celebrating. We found them at a place that didn’t impress them much with it’s food or service. We slowly walked around as darkness settled in, and dropped into a pub in the classy part of town. The price for beer was pretty classy too! 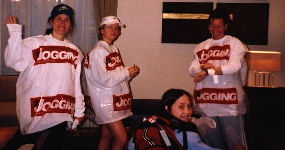 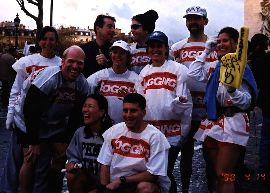 Team Delaware at the start 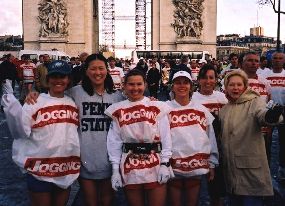 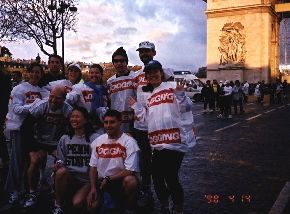 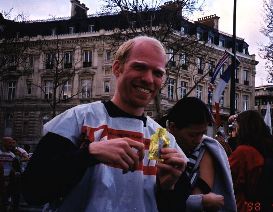 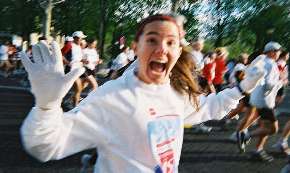 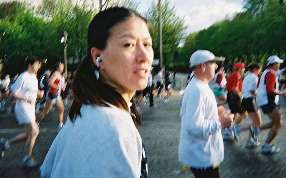 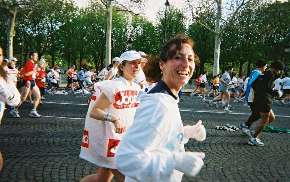 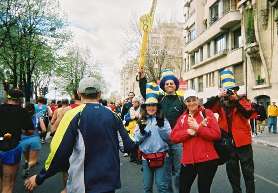 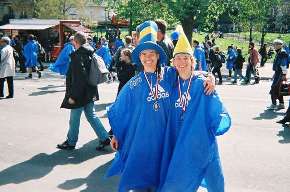 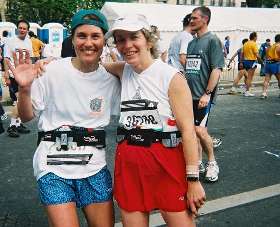 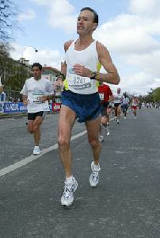 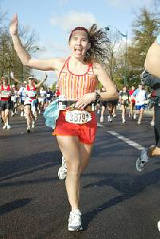 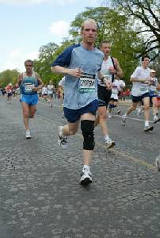 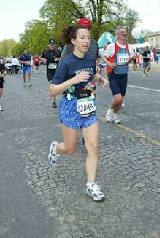 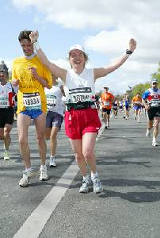 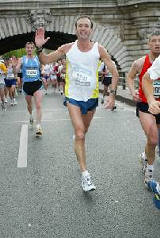 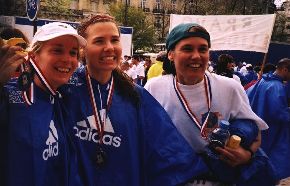 Jerry || Erin || Lori, Darlise and Lorri at the finish 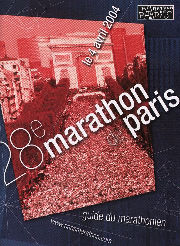