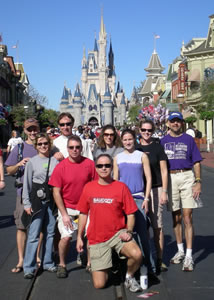 12 Rebel Runners participated in Disney’s Marathon Weekend events. We flew to Orlando to enjoy up to 5 days of walking and running through the Disney parks, 1/9/09-1/13/09.

Marathon Man and 5 others ran the Half on Saturday, followed by the Full on Sunday. Both races started at 5:50am in total darkness (except for the fireworks)!

Friday
First stop for many of us on Friday was the Marathon Expo at the Wide World of Sports complex to pick up race bibs. “Dopey Rebels” Screech, Loco, Nessie, Party Girl and Shaggy had already run the Circle of Life 5K! We bussed back to our All-Star Movies Resort motel to drop off our Goody Bags.

Next stop was the Magic Kingdom where a Disney photographer gives us a Fast Pass to Space Mountain. A trip to the Monsters, Inc. Laugh floor was followed by lots of walking and a ride on the railroad around the park. Pasta dinner back at the resort would work for two days in a row.

Saturday after half
Most of us hit Animal Kingdom on Saturday, after the half marathon. We especially enjoyed Expedition Everest roller coaster (including moving backwards), the impressive Kilimanjaro Safaris, It’s Tough to be a Bug!, and the wet & cold Kali River Rapids where a few of us needed a complete change of clothes. Again, way too much walking was done.

We had an adventurous lunch at Rainforest Cafe.

Sunday after marathon
Sunday afternoon was a bit of a rest period after the marathon and gathering under a hot sun in the Rebel Reunion area. Too bad there was noplace to sit but the ground. After a shower and icing of my sore achilles, we watched the Eagles/Giants playoff game at the outdoor bar.

Later, we set out for Downtown Disney area to take a relaxing ferry ride and walk around the restaurants & stores. Dinner at House of Blues. It was impressive to see so many runners wearing their medals for the next couple of days.

Monday
It was gratifying to still be able to walk on Monday. I joined Shaggy at Hollywood Studios for a few hours where we enjoyed the Twilight Zone Tower of Terror, followed by a fast pass to the indoor Aerosmith Rock’n’Roller Coaster. A 30 minute “Beauty and the Beast” play rested us for more walking to The Great Movie Ride, Indiana Jones Epic Stunt Spectacular, Star Tours flight simulator, and around the crowded Streets of America.

Later in the afternoon, I caught up with the rest of the group at Epcot starting with Spaceship Earth (aka the big ball). Mission: SPACE was a jolting flight simulator to Mars. A silly Nemo ride, the very cool IMAX Soarin’ movie and Honey I Shrunk the Audience brought us to dusk, when we ate fish’n’chips in England at the World Showcase while waiting for the fireworks show. It was good to get to bed that night!

Tuesday
On Tuesday morning I split with the group and returned to Epcot to ride Test Track (cars) before back-to-back boat rides through the Mexico and Norway exhibits. As I continued around through China, Germany and Italy, it started to rain.

A fruit smoothie and snack bars kept me going through Japan, Morocco and France. Then it was time to catch the bus back to All Star Movies to pack and take the Magical Express back to Orlando airport. 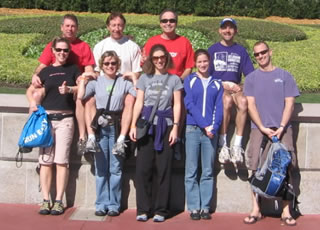 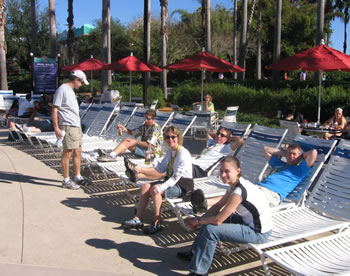 Relaxing at All Star Movies Resort 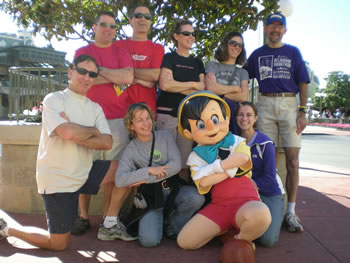 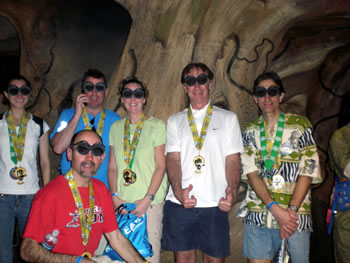 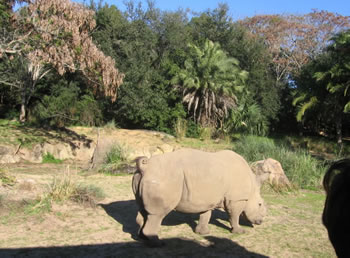 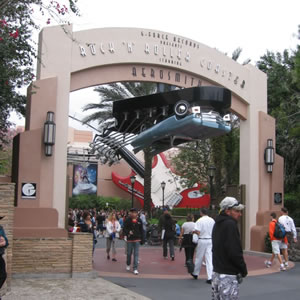 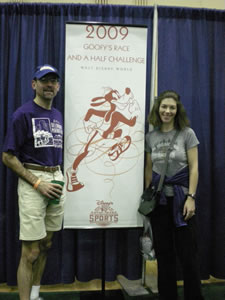 Ray with Claire at Marathon Expo 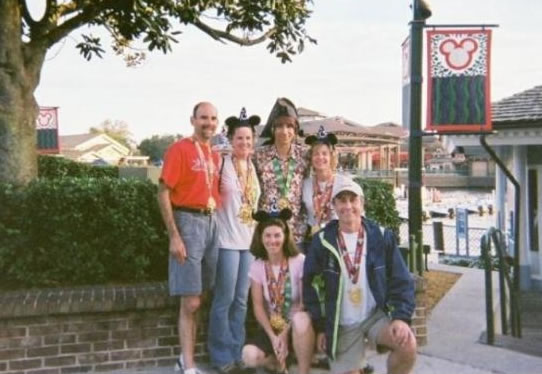