August 17, 2003. The day had arrived for Humpy’s Classic Marathon!
Here’s my account of the festivities- before, during, and after the race.

More photos, along with insight from my teammates about their own adventures. Our team had members participating in the Marathon, Half-Marathon, 5k Run and even a hiking trip on a nearby mountain. We proudly wore our green Joints in Motion tatoos.   Humpy’s Marathon website

Sunday 8/17/03 – Tony Knowles Coastal Trail
My alarm ended a sound night’s sleep at 5:30am. After stretching and some push-ups, I headed for the Howard Rock Ballroom for our Power Breakfast. The fruit, oatmeal and bran muffins got the day started off well. Then it was back to the room to suit up and apply a Joints in Motion temporary tattoo under my right ear. I had a packet of gel, a couple granola bars, advil, and tissues. A bus brought us to the start/finish area at Westchester Lagoon near the bay. It was a small event, with approximately 260 people participating in the marathon, with a similar number doing the half. We were there in time to see the 7am start for marathon walkers and to stretch and hit the porta-potties. Weather was near perfect with temperature in the upper 50’s and an overcast sky. We’d feel occasional rain sprinkles throughout the day. Almost none of us would see a moose. 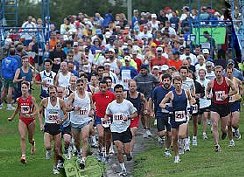 I did a short one mile warm-up jog and limped to the start line. The gun went off at 8am and we headed east on the first of three loops. The sore leg would be a factor, but I maintained an 8 minute/mile pace fairly easily. I’d wear my “Ray” cap for the first six miles, and my jacket most of the race. There were few spectators, but the out-and-back loops allowed us to pass the runners (and walkers) of all events on the narrow course. The park was totally wooded and quite pretty. Most hills were quite tame. I hydrated at every water station and walked through them for the most part, while sipping Ultima power drink. For the first 13 miles, I ran with or close to Carl. 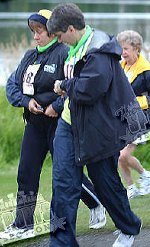 At the halfway point, I was on pace for a 3:30 time, although I knew I’d slow down for some walking towards the end. This was about the time where things got more challenging. We had a couple hills and also were alone with the trail. The half-marathoners were back at the lagoon and the only spectators were occasional people walking along the trail, unaware that a marathon was taking place. The most depressing spot was a water station at mile 16 that was unmanned. This wouldn’t have been too bad except that it also had no water!!! I found this out after I slowed to a walk and opened a granola bar (Chocolate Chunk). I nibbled at the granola anyway and was soon met by a woman on a bike who assured me that there was water at the turnaround at mile 18.2.

A few minutes before hitting the turnaround, I started seeing the lead runners headed back toward the finish. I then spent a few minutes seeking the perfect tree to utilize for some important business. It was a great morale booster to make the turn and head for home. Within minutes, I greeted Dana and then Carl. Each milemarker became huge, as my calves started to stiffen. I shouted encouragement to most of the runners I met, especially anyone with the lime-green “Joints” shirt. By mile 22, I was taking walk breaks at least once per mile, besides at the water stations. I glanced at my watch, since I knew I was losing time. As long as I didn’t have major problems, I’d beat my Dublin time, but I was hoping to run under 3:40, so there was no time to spare. The last mile saw me walk three times, as I wondered if stamina or stiff legs was the main culprit. Finally seeing the finish line about 1/3 of a mile away across the lagoon, I removed my jacket and increased my pace, figuring that there was a good chance that I’d be the first J.I.M. athlete to finish.

With only two or three runners crossing the line every minute, the names of each were announced. That’s when your name can’t possibly sound any sweeter. Mike was right there to wrap me in a foil blanket and confirm that I was in fact the first Joints finisher. I nearly forgot to remove my time chip. A 3:42:19 official time was more than acceptable, due to my soreness. Mike escorted me to the refreshment area where a local radio reporter had requested an interview. I guess I got the call, being the first finisher. I spoke to him for about 3 minutes while he shoved the microphone into my face. Then it was time for more Ultima, bananas, bagels and cookies!

Dana crossed the line #1 in her age division, but was understandably upset at missing a Boston qualifying time by 7 minutes. Her foot injury within the last couple weeks was the primary culprit. But she was the top female Joints finisher as well! Carl’s legs had tightened badly, to make his run less enjoyable. Edgar came in just 2 minutes later, in his first marathon. Justin had torn up the track in the half! By the time it was over, everyone in our group had finished, including Alli and her mom, who had turned a 5k into 5 miles due to a wrong turn. 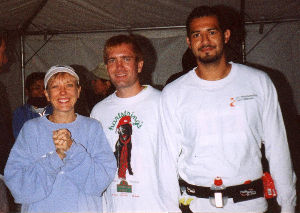 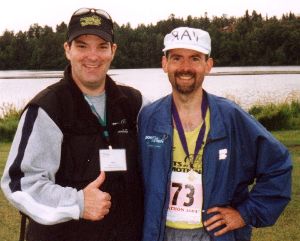 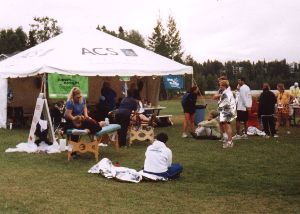 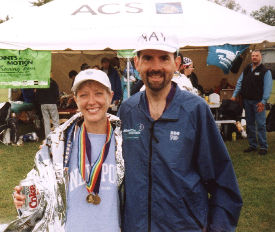 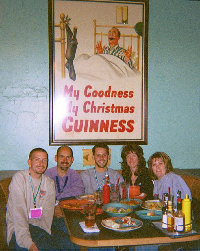 I caught a shuttle back to the hotel. After a shower and removal of my bunion pad, I joined Justin, Diane, and Bill & Lisa for a slow walk to Humpy’s Great Alaskan Alehouse for lunch. When we asked the waitress if there were any specials for marathon participants, she said no and complained that she had run the half herself, but had to now work the rest of the day because someone called out sick! We happened to sit at a table directly under a huge Guinness poster, which brought me full circle since the Dublin Marathon last year. The Alaska Ale was great, and so was the burger. As the others trudged back to the Sheraton, I headed a couple blocks the opposite way to hit 5:30 Mass at the cathedral downtown. The priest met me at the door and asked where I was from. I informed him that I had run the marathon and he inquired about the green tattoo on my neck (the shower hadn’t removed it).

There was just enough time to limp back to the hotel and head for the Celebration Party on the 15th floor at Josephine’s. A nice buffet and DJ kept smiles on our faces as many of the GA and NY chapters took control of the dance floor for a bunch of 70’s music. The sun came out and we rushed toward the windows to see a rainbow (but still not much of the mountains). Ten of us took a hotel shuttle ride to Koot’s, formally known as Chilkoot Charlie’s, a famous nightclub. Being Sunday night, only a portion of the mammoth place was open, but we enjoyed a live band and taxi’d back to the hotel. 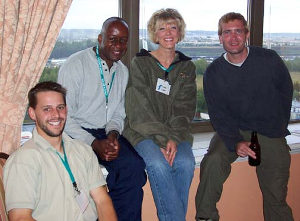 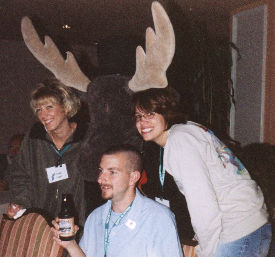 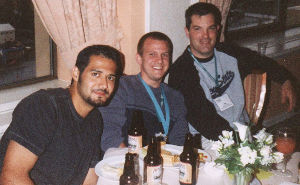 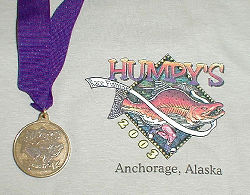