Why I Became a Runner
My initial reasons for participating in Joints in Motion Training Team: 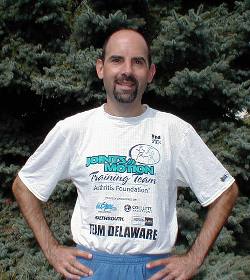 2004 Dialog Newspaper Article
2002: Running for a Cause- The Adventure Begins

In 2002, I turned 40 and noticed an article in a local newsletter to “train for a marathon in Dublin”.

I had never jogged more than 3 miles, but the offer included a coach and teammates to run with. It helped that the Arthritis Foundation “Joints in Motion” coach was an attractive lady and that we’d do training runs at a park near my home! In exchange for over $3,000 of fundraising, the trip to Ireland, gear and parties would be included.

I ran in honor of my father, who was having a shoulder replacement due to severe arthritis. Never having been involved in organized athletics (including high school sports teams or even little league baseball), I was excited to be a real athlete and have the comradery of teammates.

It was all too appropriate for Marathon Man to participate in the 2nd Lance Armstrong Foundation 5k in Wilmington, DE on July 6, 2006.

My father had passed away two weeks earlier, on 6/23, after an intense 4 month battle with brain cancer.

My parents have been a great inspiration and motivation to me to become a better runner. Simply by their example of always having a can-do attitude and a willingness to work hard to achieve their goals has shown me that anything is possible with faith, dedication and a good effort. Dad never watched me race, but from now on, he’ll be with me every step of the way!

Thank You, Rebel Runners!
It’s always comforting to have family to get through difficult times (Rebels=Family). My mother and I thank you for your thoughts and prayers. Mom really appreciated the flowers from the Rebel Runners. Since everyone won’t see the card she wrote, I’m posting it on this page, along with a photo of the pretty bouquet where it stands in her house.

I would also post a photo of the fruit you were kind enough to send me, but I ate it! 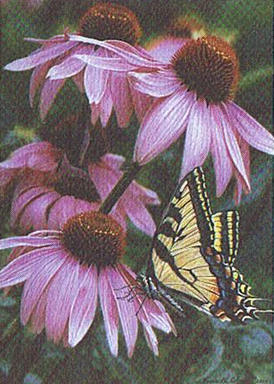 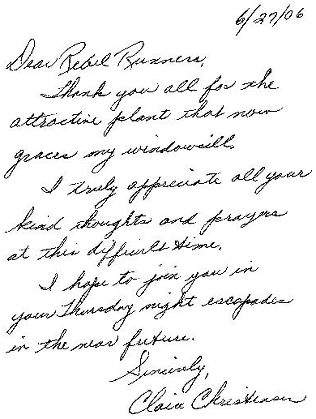 Card from Claire Christensen to the Rebel Runners 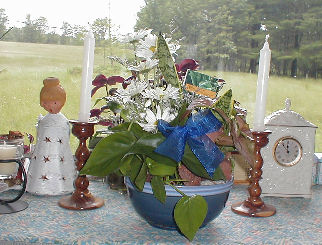 The card says:
Dear Rebel Runners,
Thank you all for the attractive plant that now graces my windowsill.
I truly appreciate all your kind thoughts and prayers at this difficult time.
I hope to join you in your Thursday night escapades in the near future.
Sincerely,
Claire Christensen

The Lord is kind and merciful,
Slow to anger and great in compassion.
Dad had successfully overcome Prostate Cancer several years ago and his struggle with Arthritis (2 shoulder replacements) became my cause when I started running. He always tried to stay in good shape and over the past few years, my parents had a regular 5K route to walk near their home in the Catskill Mountains of NY. 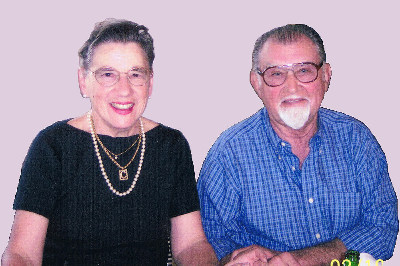 On Ash Wednesday (3/1/06), while visiting my sister’s family in North Carolina, Dad suddenly became tired and disoriented. Within hours, he was in the emergency room of Wake Med Hospital in Raleigh. After 2 days of tests, surgery was scheduled to remove a brain tumor. The 3 hour operation was successful, but Stage 3 Cancer meant that Dad would have to undergo simultaneous radiation and chemotherapy treatment for approximately six weeks.

Mom was a superb nurse as dad went through ups and downs. By late May, it was apparent that the end was coming and the local Hospice organization was very comforting and helpful in the final days. Our family was blessed with having time to say goodbye and Dad did not experience pain, other than the discomfort of realizing that something was wrong.

We have many people to thank for their prayers and support. 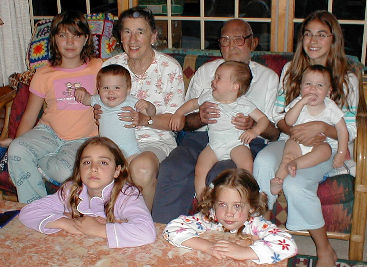