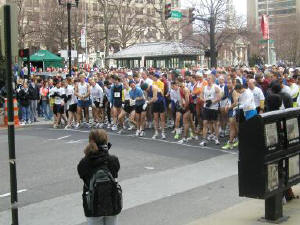 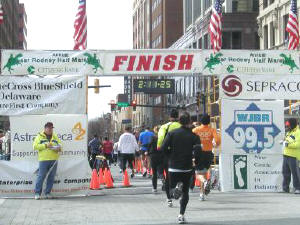 With just 3 weeks until the Paris Marathon, Pike Creek Valley teammates joined Marathon Man for our last 20 mile run before tapering. But that meant we’d have to add another 7 miles to the race. Darlise decided we’d run for an hour, prior to lining up for the 9am start.

Even with this extended warm-up, I missed my half-marathon PR by just 8 seconds!

Saturday 4/16/04 9am – Ray hosts pre-race Pasta Dinner
The Caesar Rodney Half Marathon benefits the American Lung Association chapter in Wilmington. Coordinator for the event was Sue DeNardo, who had played a big role in starting my running career when she recruited me for the Dublin Marathon with Arthritis Foundation.
Since I cook myself a big pasta dinner on the night prior to local races, I decided to invite my Paris teammates for a team meal. With 7 guests, I inserted the leaf in my dining room table for the very first time. Naturally, the beer bottle collection was a huge attraction…and the pasta didn’t kill anyone!

“Coach” Dave and his wife brought a salad, Don brought a Fat Bastard (wine), and Lori & John, and Jack & Barbara rounded out the group.. 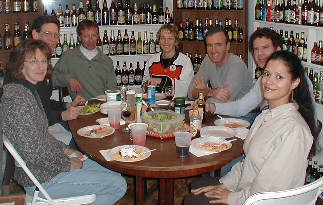 Sunday 4/17/04 730am – Team congregates at Jack’s place
Darlise decided that we’d assemble at Jack’s house near the Brandywine in Wilmington, since it’s under a mile from the starting line. It was bizarre to be putting in 7 miles before the race, but we had to get in our last 20 mile long run somehow! We arrived at 730 on a chilly 28 degree morning and 7 of us ran along the picturesque riverfront for about an hour. Mike and I had the pleasure of running with 5 fast women. Who needed a race? At 830, We stopped into Jack’s for another drink and make gear adjustments for the race. Then we jogged almost a mile to the start line.

Those who made a last minute potty break were lucky, since the official porta-potties were never delivered. (This got the race off to an unhappy start for many of the 1200 entrants.) 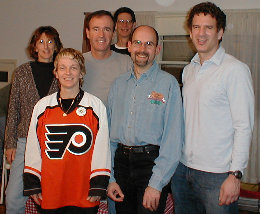 Sunday 4/17/04 9am – The gun goes off – actually, a very loud cannon blast!
The race winds through downtown Wilmington to the waterfront area and back to the Brandywine to climb along the river to the turnaround point. With 7 miles already under my belt, I was looking to start at a moderate 8 minute pace and see how well I could maintain it once we started our ascent at mile 5. For a couple miles, I ran alongside Rich, who had been battling a foot problem. Two members of the team were already sidelined for Paris.

My pace was relaxed and I felt strong. I think Jack’s Paris socks helped alot. By the time we started climbing along the river, I was passing many of the slower runners. But Greg (battling knee soreness) was nowhere in site and staye ahead the entire way. There were lots of water stations. There was lots of snot running down my nose. But aside from cold hands, conditions were great as the temperature tried to move to the upper 30’s.

Once I’d conquered the hill, I knew I wanted to keep a good pace on the flats before making an easy descent. Even feeling good, I was wary about the uphill to the finish, but once on it, I still had the energy to attack it pretty well. Upon finishing with arms raised, I knew that I was in the neighborhood of a half-marathon personal record (established at the 2003 Philly Distance Run), but only later found out that I just barely missed it.

A quick gulp of Gatorade, then I ran down deserted Market Street Mall and back to add another mile to the crazy day’s total. Then, and only then, was it time for pizza and a donut! I said hello again to a relieved Sue DeNardo, then dropped over to see Coach Duncan’s new baby. Meanwhile, Coach Amy had placed 2nd overall for female runners!

Sunday 4/17/04 1145am – Washington St. Alehouse – team celebration!
Everyone had a pretty good race. Virtually the whole Paris group dropped in for some beer. I had a delicious omelet.
Too bad I didn’t have a camera to capture the event. We’d be on our planes to France in just 17 days! 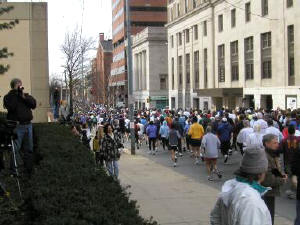 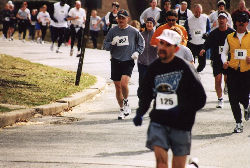 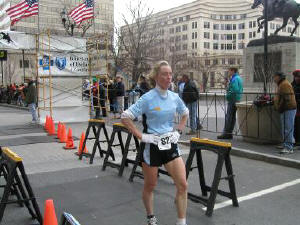 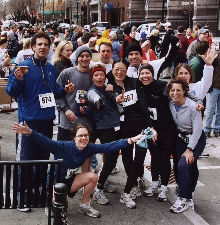 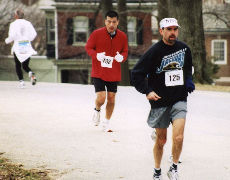