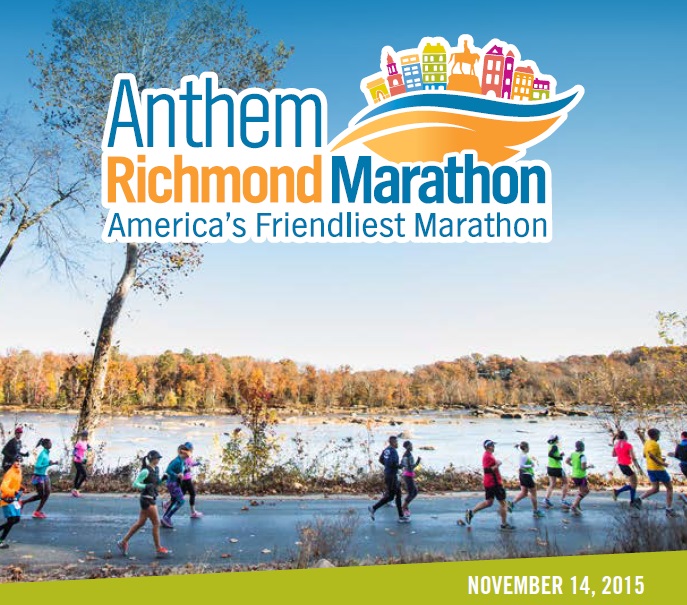 “Anthem Richmond Marathon”, America’s Friendliest Marathon would be my 27th 26.2 mile race and I put it on the calendar for a few reasons. Several friends gave it good reviews, my fellow Pike Creek Valley Running Club members Wes and Michelle were running it, and my cousin Eric lived in the Richmond suburbs, so I had a place to sleep! Race day was November 14, 2015.

I went into the race with a slight high hamstring issue, but training had gone pretty well, including a couple hilly long runs around Rondout Reservoir in the Catskills. I’d stay at Eric’s house the nights before and after the event. 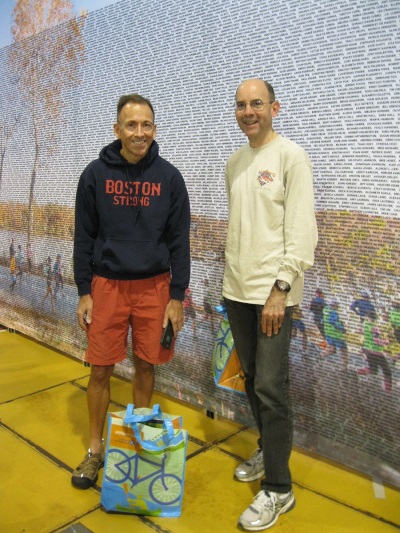 Departing Wilmington at noon, I’d arrive at Eric’s at 440pm after a few stretches of heavy traffic in Virginia. After a quick hello, I drove the 18 miles to the Expo where I happened to arrive just as Wes and Michelle were parking. We enjoyed the busy Expo, took photos at the wall of names, and then I followed them a few miles further downtown where we had a late, but good meal at the crowded “Trabbant’s”. Returned to Eric’s at 1030pm.

Race Morning
Up at 5am for exercise and some of Eric’s “Oats” cereal, then departed at 6am. Moderate traffic, but a good street parking spot to allow an easy walk to start and just a slightly longer walk back from the finish. The sun wasn’t up yet, but the downtown streets were filled with runners and many of us became squatters inside the large, warm Marriott lobby. It was 47 degrees outside, but sunny, and I was fortunate enough to hit the potty twice before lining up. 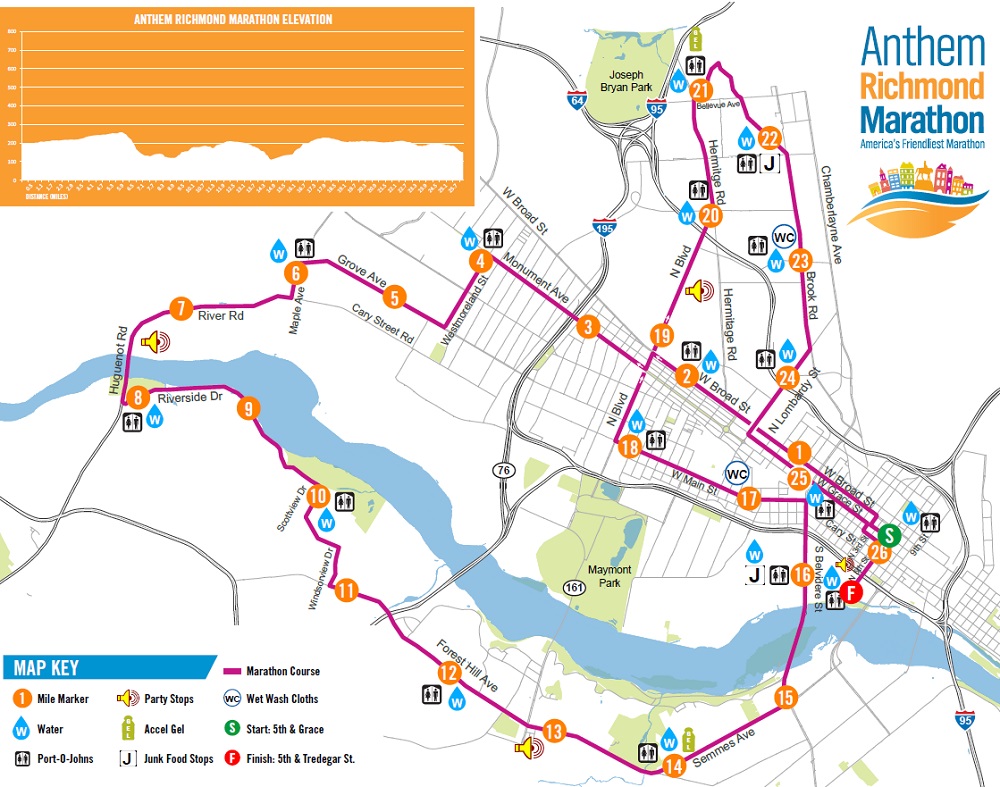 The 7:45am start on downtown streets was fine, and I was paced by some attractive ladies. This course included some long, straight stretches down streets, sometimes with a headwind that could be a bit demoralizing. Always trying to survive until the next turn. Much of the first 2 miles was a straight shot down Broad Street. Then a couple quick turns onto Monument Avenue for another 2 miles.

The first river crossing was at mile 7.5, and put us onto the pretty part of the course, running alongside the river for a mile or so. I remained with the 3:35 pace group until mile 8, when they started to pull away from me. I got enough hydration at the water stops, but did the whole race using just 2 Gu’s, which is not much nutrition! 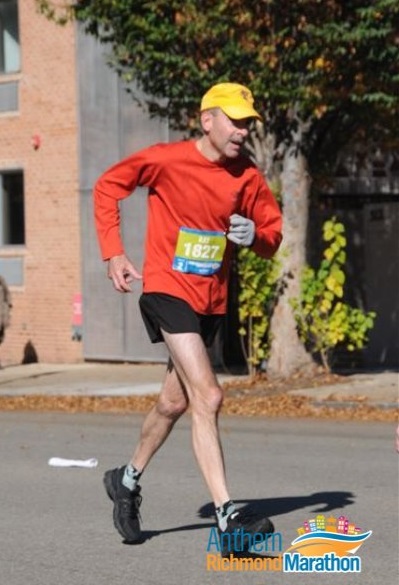 Long Bridge to Richmond
The mile 15 bridge back into town was high and scenic, but nearly a mile long and we were exposed to the wind. Our reward for reaching the other side was a headwind on West Main Street for a mile and a half. But who’s complaining? We’re runners and we’re familiar with agony. I was wearing “magic gloves” but ended up with just one on for the last 8 miles due to water stops and opening a Gu.

Miles 20-24 wound through some nice suburban neighborhoods and set us up for the last 2 miles back in the city. The final .4 miles is a pretty steep descent to the finish, so thank God my legs weren’t growling too much. I was happy with a 3:42:56 time, good enough for top 16% of my 50-54 age group.

Refreshments on Brown’s Island
At the end of the finish chute was a walking bridge to the after-party on Brown’s Island where we received a nice finisher blanket! Even better were the smoothie, pizza and beer. The place was packed, so I could not find Wes or Michelle. 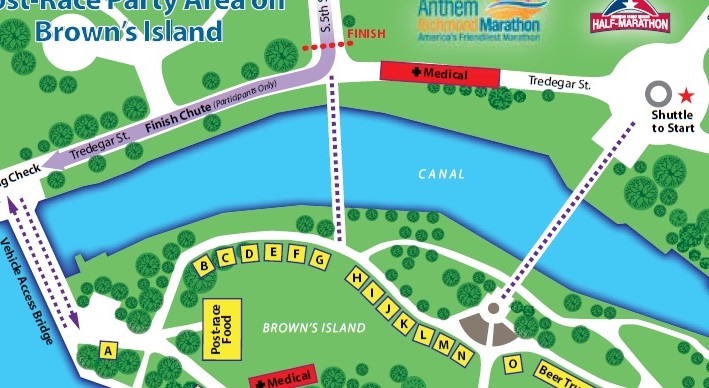 As the Richmond Times-Dispatch would report the next day, “More than 19,000 registered for the marathon, the American Family Fitness Half Marathon and the HCA Virginia 8K. More than 15,700 reached the finish line.” That paper reported Wesley Stafford as 10th finisher and Raymond Christensen as 42nd of 260 in the Men 45-49 age group. Wes tore up the course in 3:19:25! 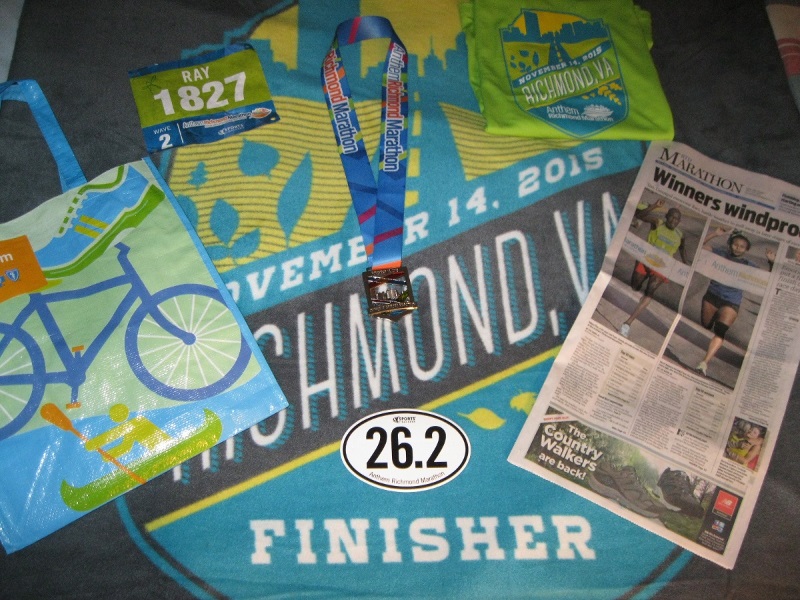 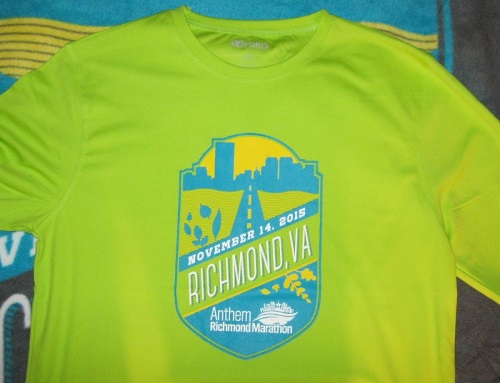 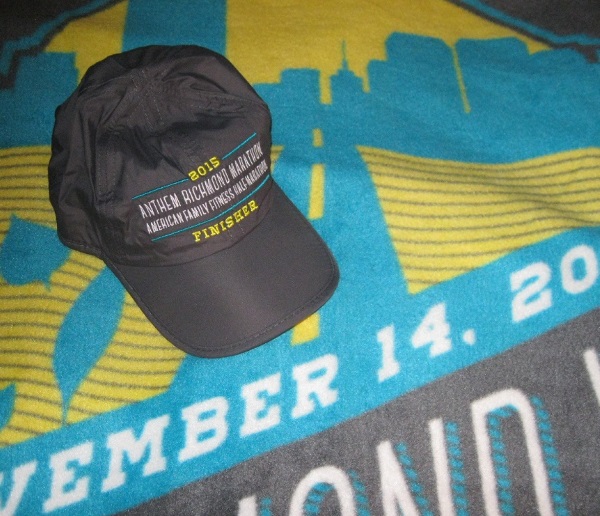 Gridlock
The walk back to my car was mostly uphill. Once out of my spot, I was immediately engulfed in a traffic jam, moving under 2 miles in 1 1/2 hours. That took some of the joy out of the day!

Back to Eric’s house by 2pm for a shower and nice visit from our cousin Kathy with a family update. Eric and I drove around the planned town to “The Grapevine”, a Greek/Italian restaurant. 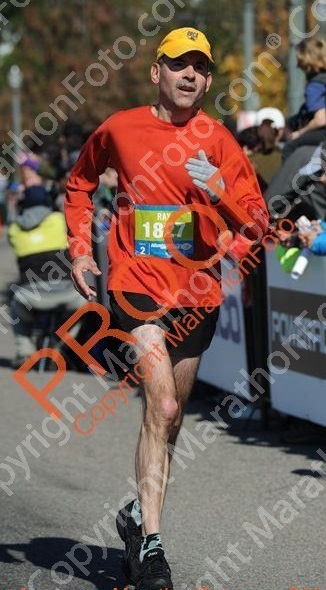 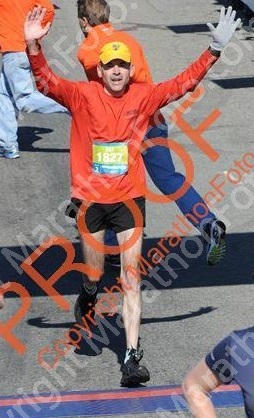 Sunday Driving and Visit
A long Sunday started with cereal, coffee and the paper before Eric brought me to 915 Mass at his circular church. I said goodbye and from 1030-1230 headed to Alexandria for a nice visit with my old Navy buddy Mike Eaton, Jone, and their daughter Madison. We watched football and grabbed a late afternoon bite at Panera before I hit the road to get home at 730pm. That gave me time to watch the NY Rangers win on TV, to complete a very enjoyable weekend. 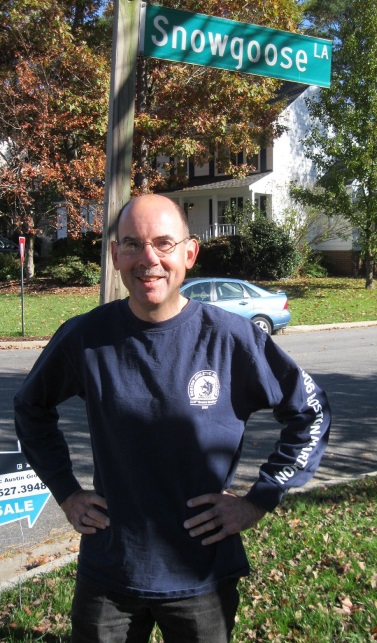 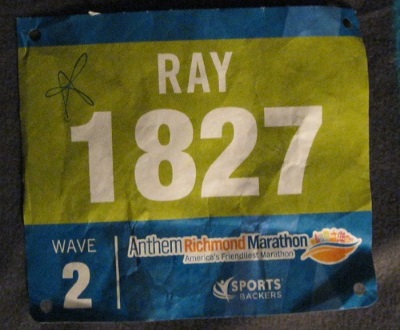 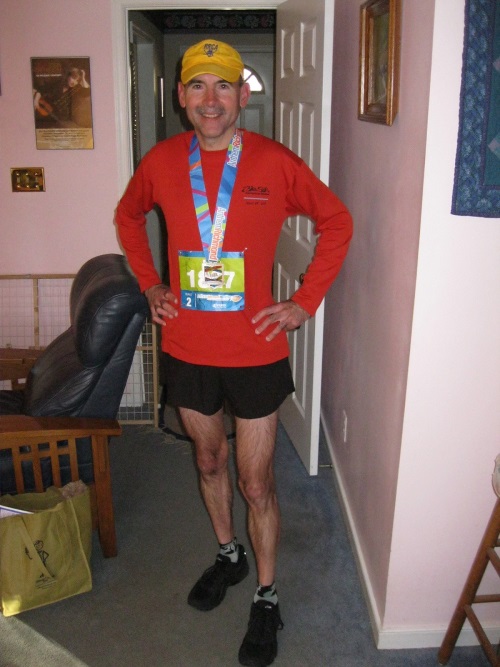