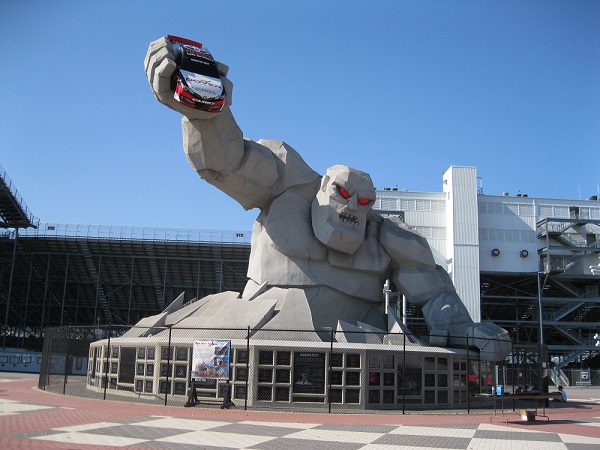 The 4th annual Monster Mash Marathon was run on Saturday, October 18, 2014. Conditions were comfortable for the 7am start on the “Monster Mile” racetrack where 2 NASCAR races are held each year. Cloudy skies gave way to brilliant sunshine and a slight headwind for the 2nd half of the 26.2 miles made the flat course slightly more challenging.

This event is a fundraiser for Wounded Warrior Project.

25th Marathon is my First in Delaware!

Dover Downs
2014 is the 4th annual Monster Mash Marathon and Half. The first mile is a lap around the Dover Downs NASCAR track, starting at 7am while the sun is rising. Although some MarathonGuide runner comments include recommendations for the scenery, I knew that it would be the most boring course I’d ever run. Even Dave McCorquodale (many small marathons among his 100+) had found it extremely mundane in 2013.

The bulk of the course is on long, straight stretches of road with cornfields on either side. With just 189 marathon finishers and 289 for the Half, even the first 6.5 shared miles had lonely patches. To demonstrate how ambivalent I was about selecting Monster Mash, I already had a 20 mile training run in before I decided on it. The timing was right for one week after helping out at Delaware Distance Classic 15K.

This was my 25th marathon overall, and very first in Delaware. A few weeks earlier while running in White Clay Park alongside Adam Shilling, I was overjoyed to hear that he was planning on the same race, with similar goal time of 3:30. So hopefully it would not be just me and some cows out there! My training was decent, with not much speed work and just hitting 44 mile weeks twice, but I did get in four 20+ runs. I had a shot.

Good Start
Race day weather was good. On the drive to Dover, “Footloose” came on the radio, so a smile came to my face. (I have to state that since there were no witnesses in my car and it was dark anyway, so I wouldn’t have seen it myself in the mirror.) The upside of a tiny race is that you can park a couple hundred feet from the registration tent, check in at 6am, have easy access to restrooms and easily find your friends. Adam arrived 10 minutes later and I ended up seeing another half dozen PCVRC members who were running the half.

That first “Monster Mile” was spectacular. Easily one of the coolest miles I’ve ever run! Unfortunately it got me off to a fast pace that I’d be unable to moderate until nearly mile 6. The track is banked even low on the straight portions, which turned out to be an omen with lots of the course having enough of a camber to be noticeable.

Once we left the Speedway and it’s parking lots, I finally got to visit historic Dover for the very first time. Very pretty tree-lined streets, nice houses, government buildings downtown for 2 miles and then suddenly we’re in the middle of nowhere. I’d have to say that 20 miles worth of the course has cornfields on one side and grassland on the other. The only difference is which side of the road that either is on! More than any other race, I was sorry to see the Half runners split from us.

Adam had smartly started at the right pace, and I found him catching up to me just after I turned around on a 2 mile “out and back” portion nearing the half way point. We ran together (in our matching PCVRC singlets) for a couple miles, agreeing that we’d been lucky that the sun had not come out until we had just turned from running directly towards it. Unfortunately, we also agreed that the moderate headwind we now felt was going to remain a nuisance for much of the 2nd half. Adam maintained pace as I started to drop back at mile 15.5 with some tightness in my upper legs.

It was now pretty sunny. Still not hot, due to the breeze, and in the low 60’s. More cornfields. And more. Then there were a couple fields that had already been cut down – that was a nice change of pace! Speaking of pace, mine was slowing. Here’s a “glass is half full” moment: At least in a small race, there are fewer people to pass you.

Thirsty
I realized that I was getting dehydrated, since the gatorade and water at the tables never seemed to be enough. There were enough water crews (always high school kids), but I caught one of the tables a bad time. I needed water since I’d just done a gel. The 3 kids only had gatorade, while 2 guys were bringing a few more gallons of water over. Not thinking clearly, I didn’t grab a gatorade until it was too late and spilled it. So no water, no gatorade and I could only think of reaching the next table. When I arrived, I yelled out for one of each. Got the gatorade and gulped it down. For water, I had been handed an empty cup. That kind of threw me into a panic, but now I’d have my excuse for a subpar run 😉

Mile 20 was in front of a house that was surrounded by cornfields. Legs tight and stride was probably pretty ugly. I had been passed by Keith Straw (pink tutu man) at around 17. Avoiding some caterpillars who were crossing the road. I hate cornfields. I hate this little breeze. I hate the girls who pass me (not really).

At mile 25, I finally see the racetrack in the distance. I don’t want to look at my watch, so I’ve got no idea of time. Overpass over Rt. 1 (probably the biggest little hill on the course) and the downside at least gives me a push past mile 26. The finish is directly in front of Miles the Monster, where they are announcing the Half awards, so I sneak across the line and frown when I see 3:38:24. However, I did break my record for time to finish a water bottle after a race, which proved that I was dehydrated enough to hurt my performance.

In his first marathon since having screws removed from his broken leg injury, Adam had maintained pace nicely to finish in under 3:25! Awards for nearly every club member who ran the Half!

Very cool medal, with a halloween monster in it that spins. I’m usually more hungry after a race (only got down my usual 2 gels), but drinking a smoothie and eating a good roast beef sandwich made me feel better. As people started to leave, I wandered back inside the speedway to watch the start of a breast cancer awareness 1 mile jog around the track. 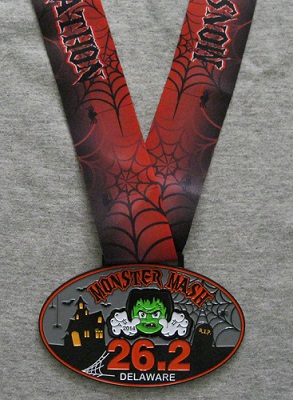 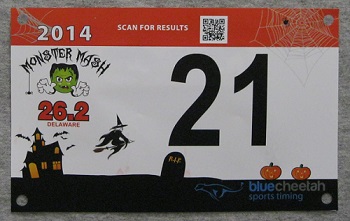 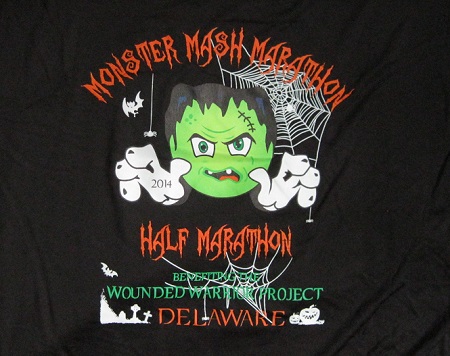 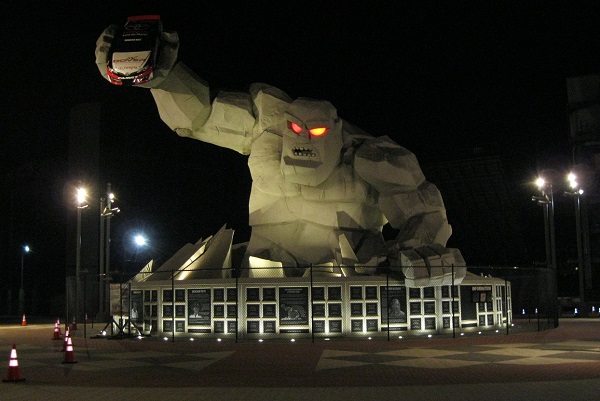 Miles the Monster at 615am 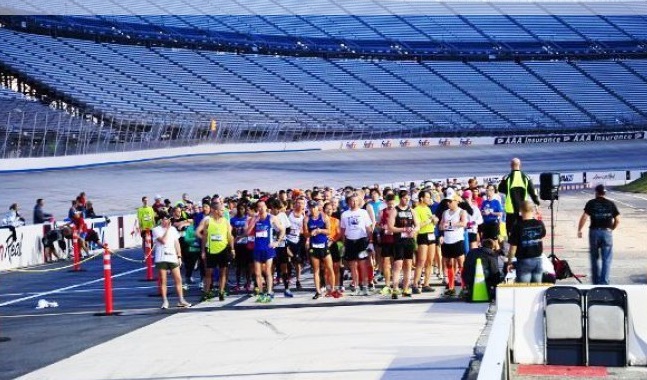 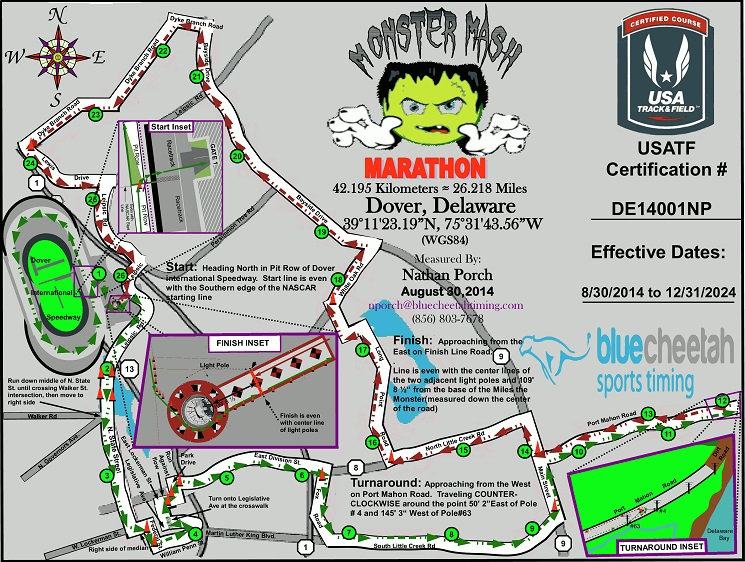 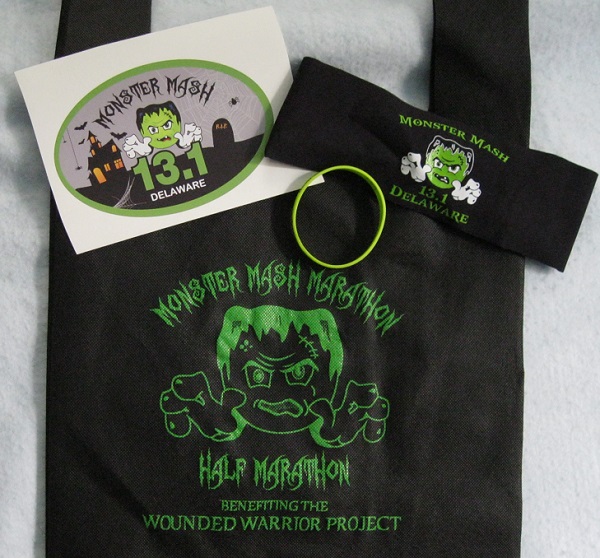 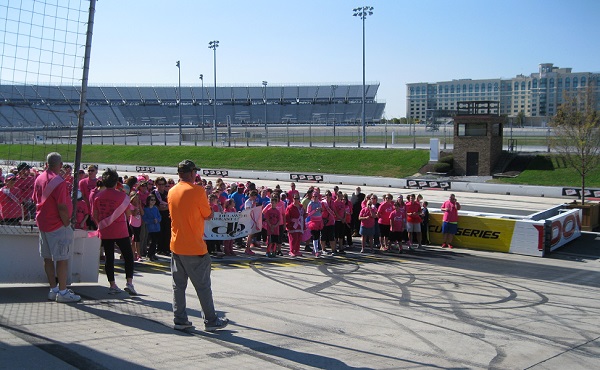 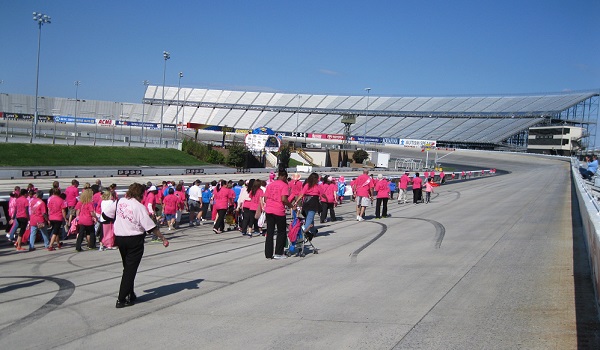 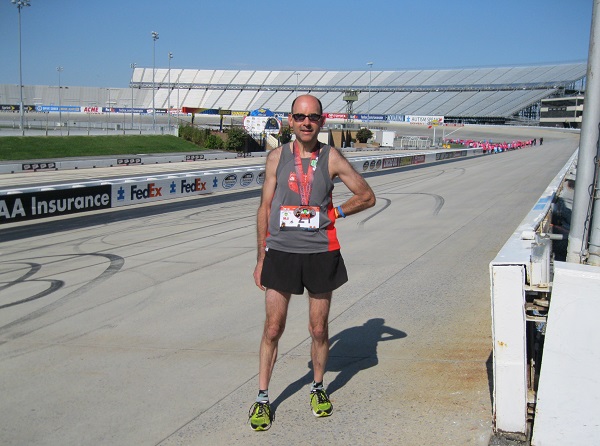 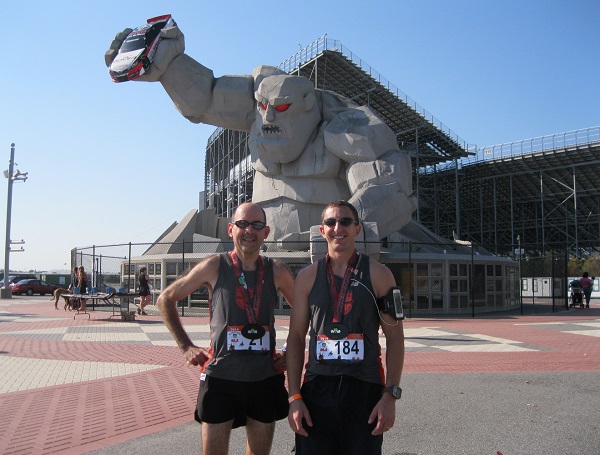