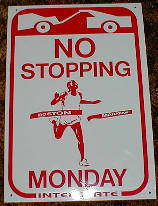 Wicked haad!!!
Marathon Man entered his corral under a brilliant blue sky and waited for the high noon start time. Almost 20,000 men and women accompanied him for the 109th running of the Boston Marathon. For results, visit official race site.

How To Conquer Heartbreak Hill 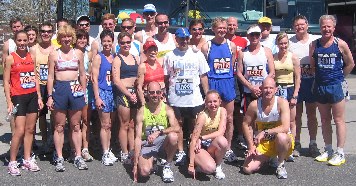 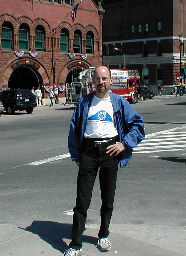 DSC Boston Bus Runners         Ray in Boston outside the expo

Monday 4/18/05: Patriots Day……Marathon Day!
615 am: After stretching and a quick shower, I snacked on Gatorade and peanuts while suiting up. The marathon takes center stage in the Boston area on Patriots Day, so we caught some of the pre-race TV coverage (as if we needed more adrenaline!) We winced when the forecast called for a high of 71 and a cloudless sky.

745 am: Upon taking my seat in the Gregg’s bus, I bit into the sesame bagel that Larry had gotten for me. One of the seeds squirted directly into my left eye. Just what I needed! I couldn’t remove it right away, so I wondered how I’d explain that a bagel injury hampered my performance… At least those seated around me got a laugh. 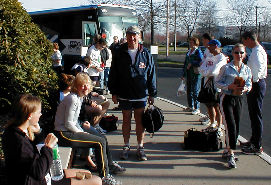 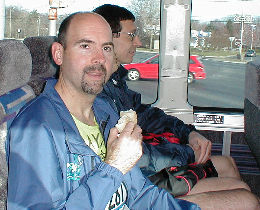 Team DE took our 15 minute ride to Hopkinton and parked in our reserved space at an Exxon station only steps from my corral. First class treatment! The traditional noon start allowed plenty of time for stretching, hydration and port-a-potty visits. Before finally removing the dastardly sesame seed from my eye, I strolled through the public Marathon Day fair and then through the Athletes Village on the sports field of the town high school. Thousands of runners were sprawled abour under the sun, with thousands more inside large tents. Armed with Power Bars and water, I headed back to the Delaware base camp and had Carolyn take my picture with the Exxon tiger.

11 am: The wait is almost over. A final potty break, team photo in front of the bus, and best of luck to everyone! I entered Corral #7 at 11:30 and took a seat on the warm pavement. We were going to bake under the hot sun for close to 4 hours, so I took advantage when a bottle of sun-screen was being passed around. The national anthem and a flyover by two fighter jets kept us occupied for the final few minutes. 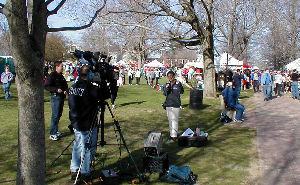 Noon start: Race Observations
Just a few goose bumps as the gun went off and we spent about 6 minutes walking, then jogging uphill to the start. From there, the course starts with a steady downhill section for several miles. It had been drummed into my head to avoid the impulse to go out too quickly. I heeded the advice.

The crowds of spectators at the start were over 8 rows deep. People lined the course in and between the quaint Massachusetts towns of Ashland, Framingham, Natick, Wellesley, Newton and Brookline. Plenty of kids exchanged high-fives with runners. Marathon Man obliged, but quickly realized that his speed increased each time he slapped some hands. A huge number of people offered orange slices, from start to finish!

I maintained my planned 8 minute pace quite well through the halfway point. The Wellesley College girls lived up to expectations. As they do every year, they cheered ferociously while leaning over the partitions to high-five and even accept kisses from gleeful runners. Hand slapping was enough for Marathon Man on this day!

The welcome water stops were very close to each mile marker. As the race progressed, I became aware that water on the right was always colder than that on the left. At each stop, I grabbed water, and then gulped Gatorade. Most of the water was used to rinse my hands and pour over my head (sweet!) Since I drank on the run, by the time it was all over, I was soaked with sticky lemon-lime Gatorade. But under the hot sun, it tasted better with every mile.

Training runs around Delcastle’s outer loop, and reading course descriptions had prepared me well for the infamous Newton Hills, but that didn’t make them any less formidable! I finally felt first-hand why this is a difficult course as soon as I triumphantly crested Heartbreak Hill…
After battling to the top, I knew that my reward was that the final 5 miles were predominantly downhill. But it didn’t take many more steps to realize that my legs had tightened up—quads, calves, and everything else below the waist. I hadn’t stopped to walk, and didn’t plan to, yet I already knew I’d be hanging on for dear life.

Descending through Brookline, I had largely lost interest in high-fives, and by the time we got to the roaring crowds in Boston, I almost wanted to ignore the hundreds of spectators calling out my name. 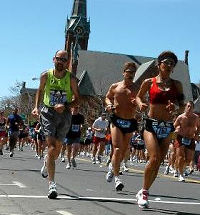 The huge Citgo sign came into view when I was 3 miles from it. But it seemingly refused to get closer as I struggled through the final miles. Although I still had no stride when I reached it, a smile came to my face for a few seconds. One mile to go! My 3 hour 40 minute goal looked virtually secure and the noise was now deafening with spectators 5 and 6 rows deep on either side.

That final mile was incredibly long!!! To try to summon any remaining energy, I even ran alongside the crowd for some more high-fives, but the enthusiastic slaps threatened to slow me down, so I had to get out. One long straightaway, then two quick turns and the finish line was in sight. With 100 yards to go, I re-gained some semblance of a kick and refused to let my legs slow until crossing the line. I was concentrating so much that I can’t remember if I lifted my arms in joy, as I’ve done in every other race.

Water… Gatorade (warm—yuch!)… Chip removal… Medal… Goody bag…
I munched on banana, Fig Newtons and strawberry yogurt smoothie as I slowly limped several blocks to the bus, through the crowded reunion area. That walk is always difficult, but always triumphant. This one was particularly satisfying, because I had conquered the legendary Boston Marathon. 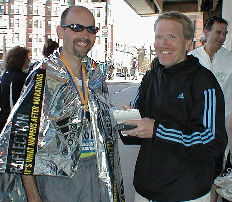 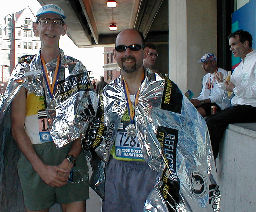 Our group assembled at the bus on cool and shady Clarendon Street, where soda, beer and wine were waiting for us. Ray was interviewed by Kevin Tresolini for an article to be published the next day in the Wilmington News Journal. Marathon Man stretched and removed the ankle brace, which was now becoming quite irritating. We waited until 5:20pm for the remainder of the team to arrive and headed back to Natick.

After a soothing shower, everyone enjoyed a well-deserved delicious dinner at Ken’s Steakhouse. The next day, which promised to be a hot one, we departed the hotel at 9am and stopped at the Blue Colony Diner (Newtown, CT) to eat and confirm that we could all still walk. The trip came to a close upon arrival back at NCC airport at 5pm, where it was sunny and over 85 degrees! Not very good running conditions. All that was left to do on the way home was to pick up the paper and see the results! 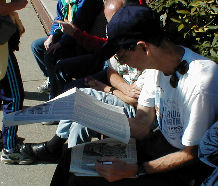 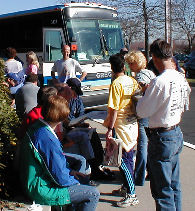 The Lord is Kind and Merciful!

I thank my family and friends for their prayers.
I thank my fellow runners for their encouragement and support.
I thank God for all the blessings I’ve been given, including a healthy body.

My marathons are always run in honor of my father and his battle with arthritis.

I also dedicated this race to those with aspirations — that they may have the strength and courage to accomplish them, and those without — that they may overcome adversity to seek greater joy and fulfillment in their lives. 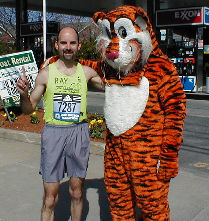 Ray gets advice from Exxon tiger
— photo by Carolyn McCorquodale