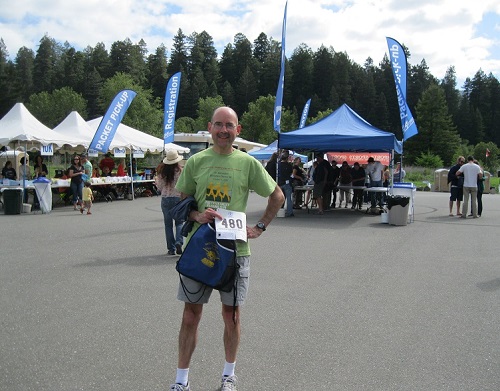 Packet pickup on afternoon before race – photo by Bart

The 43rd annual Avenue of the Giants Marathon was run on a refreshingly cool, sometimes misty first Sunday in May. It’s a double out-and-back race where the 2nd leg is shared with half marathon & 10K race participants.

The race, in Humbold Redwoods State Park in northern California, would be at the end of my 11 day trip, the day before flying home to Delaware. This was my 3rd marathon in CA. I visited friends and enjoyed scenic training runs in San Jose, the Sierra Mountains, and Sacramento.

Giants Game One Week Before Avenue of the Giants

A theme of my trip became “Giants” since I hit my first San Francisco Giants game at ATT Park the day after arriving and ran Avenue of the Giants the day before I departed California. My friend Bart Adao and I drove 30 miles from his home in Santa Clara and parked over a mile from the stadium. We purchased $24 “Standing Room” tickets and scored big when we found great ($50) seats in the lower level behind the Giants dugout. After 6 innings, we started a tour around stadium to get every perspective, including McCovey Cove.

The Giants won, with Tim Lincecum pitching and Buster Posey going deep. They would go on to win the World Series for the 3rd time in 5 years.

Cruising Around Northern California
My 10 day trip had started the day before that game on Friday, April 25. At 6:45am, Delaware Express picked me up for a private ride to PHL in a classy Town Car. My flights through Denver to San Jose were not as private – totally full. Big lady, bags of peanuts, airport walks,… the usual. Arrived SJO at 130pm PDT.

Take a side-trip to read about my week leading up to the race:

Road Trip to Fortuna
Bart and I did a quick weekend road trip to Fortuna, CA – 300 miles north of his home in Santa Clara. We stayed just Saturday night at a Super 8 motel, approximately 30 miles from the race, which is pretty much in the middle of nowhere. On the road at 9:30am, we made a side trip across San Francisco Bay to visit his mom before driving up on a beautiful, clear day. The scenic drive on Highway 101 brought us past San Quentin prison, San Rafael and the coastal wine country.

Humboldt Redwoods State Park
The road got hillier and the trees grew taller, the farther north we drove. Packed pickup is in a gravel parking lot, just off an exit ramp. Grabbed my bib & shirt, snapped a pic and continued north to our motel, with just enough time to attend 5pm Mass, stretch our legs on the main street of the very sleepy town of Fortuna, and grab a good pasta meal. On TV, we watched the Golden State Warriors lose a playoff game. 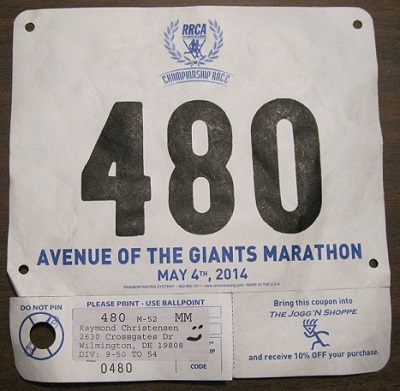 7:45 am Start
Up at 5:30 to stretch, pack, install contact lenses and hit the motel office for coffee. By 6:45, we hit the runner traffic approaching the gravel lot. Driving the narrow road with redwood trees so close that you could touch them was an inspirational way to prepare to run past them. The start line is under the overpass of Hwy 101 and we immediately start a very gradual ascent into the deep forest. An awesome place to run as we weaved our way past the huge trees on the winding road.

Fast Half
My pace was about 7:40 for the first 3 miles, which I realized was too fast. Constant Redwoods. Funniest sign I saw read “Tall Tree”, with a directional arrow. Hitting the turnaround at mile 6.5 of this first out-and-back section was great, since I realized we’d now benefit with the slight downhill back to the start/finish area where we’d turn to the 2nd loop of the course. Bart was there to snap a pic of me at 12.5, just as my legs were starting to tire a bit. Of course I wondered how my heavy (due to the insert I’d bought) old shoes would affect my performance.

1500 Half & 600 10K runners join us
Since the marathoners had spread out, it was great to run amidst the runners of the other events on the entire 2nd loop. They had started later, so before long I was catching the slower runners, which helped give my mind something to focus on besides the fact that I was growing tired – and I had just about seen enough Redwood trees 😉 We also now had a slight mist and sometimes drizzle falling, which actually felt good since it was humid, calm and not chilly.

Turn for Home
I was happy to reach the mile 19.8 turnaround and was starting to slow and struggle. This stretch found me being passed by marathoners at the same time as I was continuing to pass halfers. Walking crossed my mind a couple times, but was out of the question. At my chip time of 3:37:48, my name was announced as I crossed the line.
Oranges, bananas & a delicious chocolate wrap.
Drizzle & mist. Stretching & hobbling.

Basking in the Glory?
It was festive at the finish, but not festive enough to stick around for long. Naturally, Bart drove the next leg as we headed south to a Burger King in Willits, where I used the spacious restroom to change out of my running gear. Including that stop and a couple stretch stops, our time on the road was 1215 to 530pm when we crossed the Golden Gate into San Francisco (I’d later get a ticket in the mail even though the toll booth said “go”…
Arrived at Bart’s house in time to enjoy pizza while watching a Rangers/Penguins NHL playoff game!

Not too sore…
Up at 7am. Coffee + bonus pizza for breakfast!
Check email on my laptop. Walk a block to loosen up. Pack the car as the painters arrive again. At 1145, depart for SJO, gassing up the car and enjoying a speedy car rental return. Walk across the street to a long security line at SW Airlines. Plenty of time, so I call Mom (gotta use my cell minutes) and sip a Jamha Juice smoothie. Still time to walk and relax more. Score a window seat in the back on another full flight and snap photos of the Bay Area as the plane turns to the east for a stop in Denver and arrival in Philly at 1215am. Yawn. 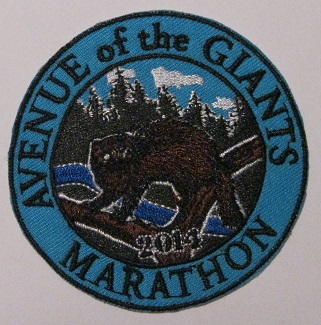 Avenue of the Giants Marathon patch 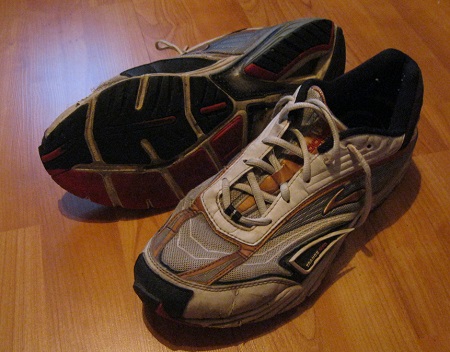 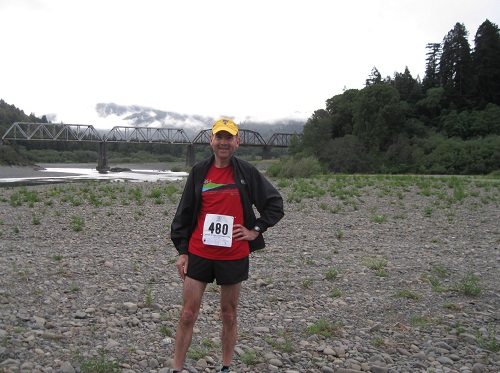 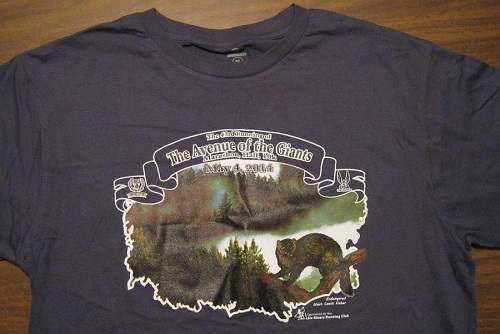 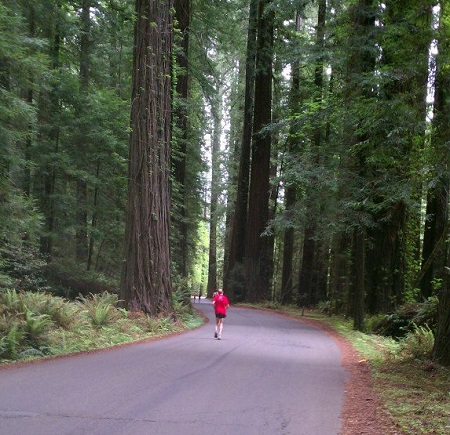 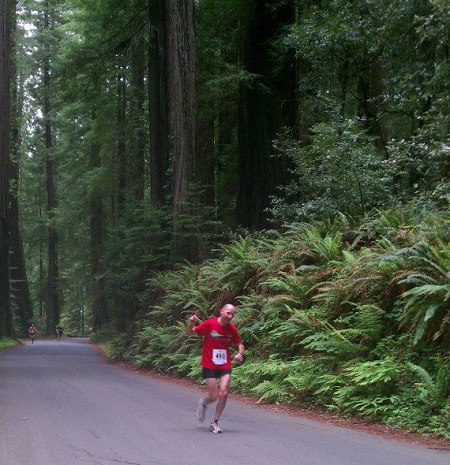 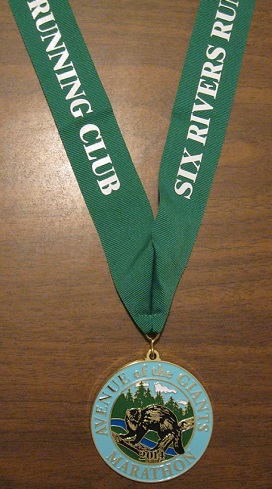 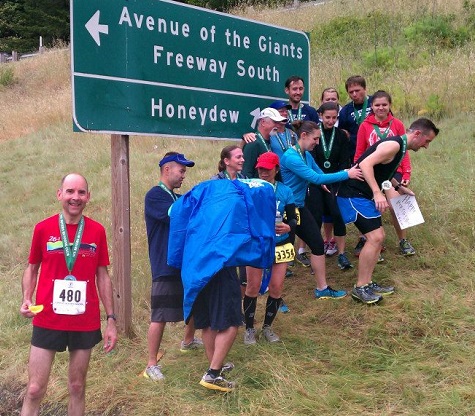 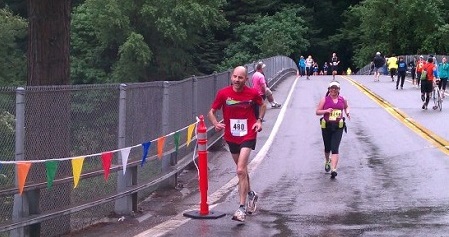 Avenue of the Giants Marathon (official website)       Did you see Driving & Visiting part of my trip?